A majority of the studies found that an identical dose of Vitamin D relieved pain, even though they ignored the fact that obese, elderly, people with some diseases,those with dark skin, etc.(high risk) need more vitamin D than others.

The TOP articles in Pain and Vitamin D are listed here:

Pages listed in BOTH the categories Darker Skin and Pain

Evaluation of clinical studies regarding the use of vitamin D for the treatment of chronic pain was previously undertaken in 2008 [6]. The authors searched MEDLINE (PubMed) using various search terms for vitamin D and pain prior to September 2008. Twenty-two relevant studies were identified that reported mean 25(OH)D levels and/or investigated the results of vitamin D treatment in patients with chronic pain conditions.

A Cochrane review of randomized doubleblind trials of vitamin D supplementation compared with placebo was published in 2010 [4]. The aim was to determine the efficacy of vitamin D in the treatment of chronic pain conditions. Only four studies (with a total of 294 participants) were included; eleven trials were excluded due to poor methodological design, or because not all participants received a clearly defined chronic pain diagnosis [4]. The studies included were similar in quality, used analogous chronic pain conditions with comparable outcome measures [91, 96, 99, 100]. Patients were supplemented with varying amounts and formulations of vitamin D for periods ranging from 16 weeks to 12 months. In summary, out of the four trials reviewed, the benefit of using vitamin D in chronic pain treatment was only shown in one trial. In the other three trials, there was no significant beneficial effect of vitamin D over placebo. Adverse effects of treatment were infrequent, and occurred at the same rates in vitamin D and placebo groups [96, 100].

The number of randomized placebo- controlled double-blind studies is increasing which is encouraging. Six of the RCTs included in our study were published since 2011. Although the search strategy of this comprehensive review was thorough, it is possible that some randomized clinical trials might not have been located. A positive publication bias cannot be excluded as journals are reluctant to publish negative results. The overall picture generated by a review of this type could thus be a false positive.

Studies using visual analog scale (VAS) pain scores as the primary or solitary outcome measure have shown mixed results in chronic pain patients when evaluating the impact of vitamin D supplementation in this condition [82, 91, 101-103]. Significant improvements in assessment of sleep, mood, pain levels, wellbeing, and various aspects of quality of life with vitamin D supplementation have been shown [82, 104-107]. Whilst there is a growing body of both clinical and laboratory evidence pointing to a potential relationship between low levels of 25(OH)D and chronic pain, it is not possible to state conclusively that vitamin D deficiency is directly linked to the etiology or maintenance of chronic pain states. The scientific evidence for the use of vitamin D as a treatment option for chronic pain is limited at present due to low-quality designs, and due to the lack of RCTs.

A number of questions remain with regard to supplementation of vitamin D in patients with chronic pain. Vitamin D metabolism and action needs to be further elucidated including extra- renal activation and catabolism, distribution and mobilization from body pools, and its interaction with relevant genetic polymorphisms [8]. There remains some debate over the precise definition of vitamin D deficiency or insufficiency based on the serum levels of 25(OH)D. The influence of age and body weight on the variability of the response of serum levels of 25(OH)D to intake needs to be clarified [8]. More focused research is necessary involving larger double-blind RCTs. These need to be stratified by baseline 25(OH)D levels, type of pain, and the use of adequate doses of vitamin D based on serum levels. More research is necessary to determine whether or not the effect of vitamin D supplementation is limited to patients who are vitamin D deficient. The optimal dose and length of time needed for supplementation need to be assessed as well. 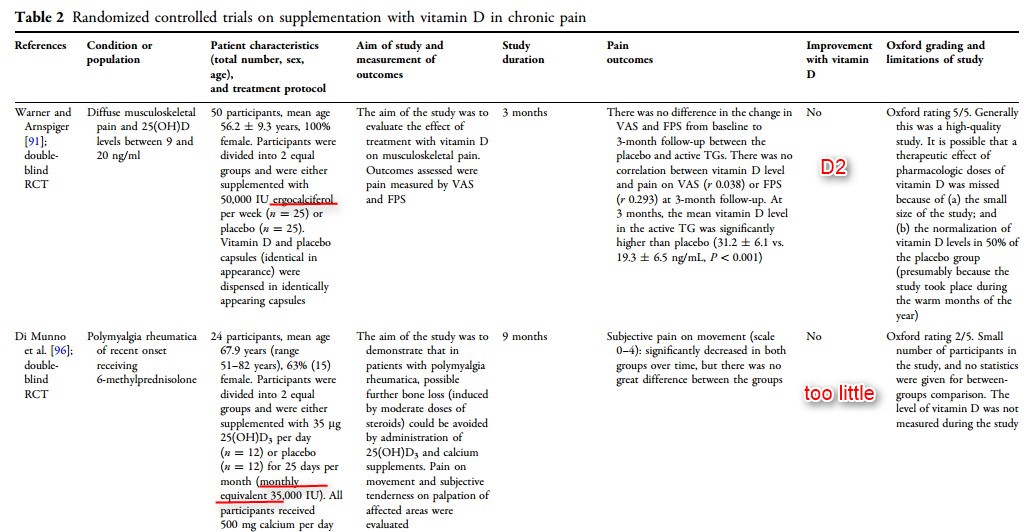 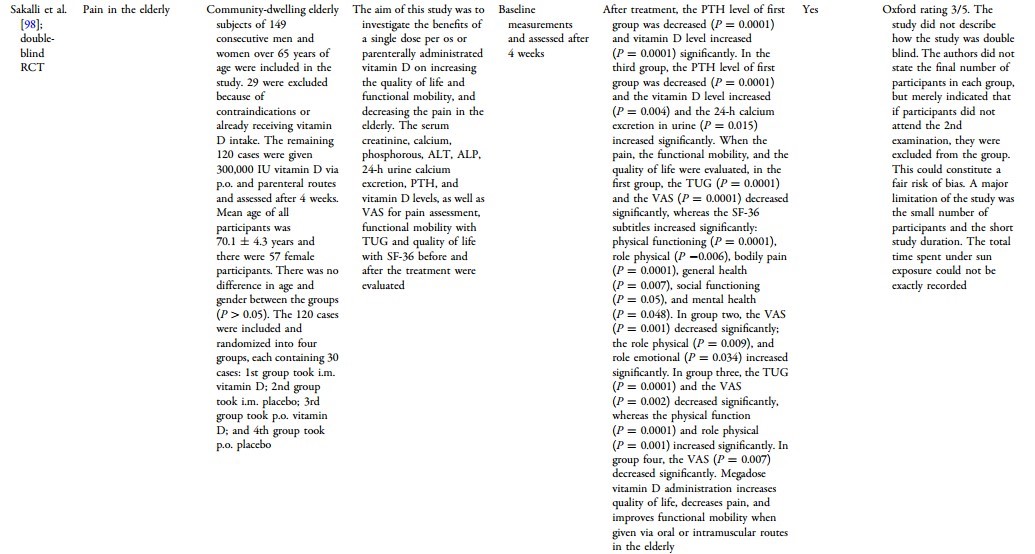 Printer Friendly PDF this page! Follow this page for updates
This page is in the following categories (# of items in each category)
Pain - chronic 135 Meta-analysis of Vitamin D 463
Edit Comments Files 9