Associations between prenatal sunshine exposure and birth outcomes in China

Founder of VitaminDWiki wonders when doctors will start recommending Vitamin D before, during, and after pregnancies

Other associations with low birth weight 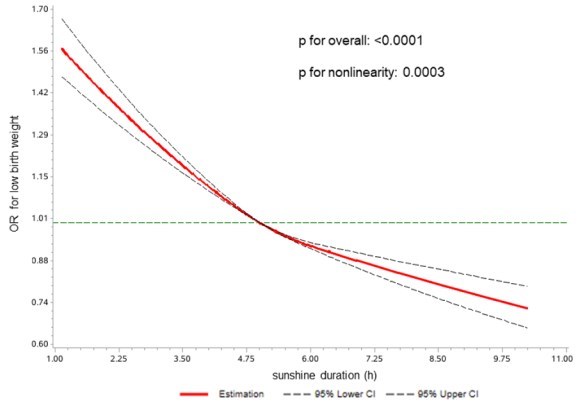 This paper is one of the first to examine the associations between prenatal sunshine exposure and birth outcomes, specifically the incidence of low birth weight (LBW) and small for gestational age (SGA), based on a nationally representative birth record dataset in China. During the sample period in the 1990s, migration was limited in rural China, allowing us to address the identification challenges, like residential sorting and avoidance behaviors. We found a nonlinear relationship between the length of sunlight and birth outcomes. In particular, prenatal exposure to increasing sunshine was associated with a reduction in the incidence of LBW and SGA, especially in the second trimester during pregnancy. This finding was consistent with the clinical evidence suggesting positive effects of sunshine on birth outcomes via obtaining vitamin D or relieving maternal stress.

Study design and population
The birth record data were obtained from the China’s National Disease Surveillance Points (DSP) system, which contained data from 145 counties in 31 provinces (autonomous regions and municipalities), using multistage cluster probability sampling to cover a 1% nationally representative sample of the Chinese population. The system was established by the Chinese Academy of Preventive Medicine, with the “Disease Prevention Unit” of the township hospitals in each DSP site responsible for the vital registration within the DSP system; see Yang et al. (2005) for a detailed introduction. The data included detailed information on each birth, including birth weight, gender, birth order, date and county of birth, gestational week, and parents’ age at birth and education years. We obtained permission from the Chinese Center for Disease Control and Prevention to use data from the Disease Surveillance Point System. Data were de-identified, and informed consent was not required.
The gestational week information was recorded according to the exact date of the mother’s last menstrual period. As displayed in Figure A1, the gestational age ranged from 28 to 45 weeks, with 93.76% of the gestational age concentrated between 37 and 41 weeks. Infants born before 37 weeks were considered preterm and infants born after 42 weeks were considered postterm, which accounted for 2.97% and 3.28% of our sample observations, respectively. The distribution of gestational age in our sample was similar to that in Dai et al. (2004), which confirmed the accuracy of the gestational age measurement. We interpolated the missing gestational age by 39 weeks in the analysis.
We used two binary indicators to represent the incidences of low birth weight (LBW) and small for gestational age (SGA), respectively. LBW refers to infants whose birth weights were below 2,500 grams, regardless of gestational age. SGA refers to babies whose birth weights were below the 10th percentile for each gestational age by gender using data from the National Population-based Birth Defects Surveillance System; see Table 2 in Dai et al. (2014) for the gestational age-specific birth weight percentiles for Chinese babies. Based on the information on gestational age and birth date, we calculated the conception date and identified the three trimesters of the pregnancy accordingly. In particular, we assigned weeks 1-13 after conception to the first trimester, weeks 14-26 to the second trimester, and weeks 27-39 to the third trimester.

Only a portion of the PDF is on this wb page

Low birth weight associated low Vitamin D (little sunshine in China in this case) - Dec 2019         Printer Friendly PDF this page! Follow this page for updates
This page is in the following categories (# of items in each category)
Noontime sun and D 312 Pregnancy 837