What can Vitamin D learn from Baby Aspirin

I notice that many seniors now take baby aspirin daily to with the expectation of preventing a variety of diseases.
I wanted to see if there was anything which we could use about aspirin to promote vitamin D.

Possible lessons to be learned from Aspirin

How Vitamin D is better than Baby Aspirin

Vitamin D is extremely low-cost, like aspirin
Vitamin D is also over-the-counter
Vitamin D has far fewer side effects (aspirin is the primary cause of bleeding stomachs)
Vitamin D provides 3X-100X more benefits than aspirin (Cancer, Heart Attack, Stroke, etc)
Vitamin D deals with about 10X more health problems than aspirin
Vitamin D helps people of all ages and sexes – vs aspirin primarily helps mature/senior males
Vitamin D has far more and better proof than aspirin
By the way, the initial study which found a heart benefit from aspirin has not been replicated, though they have tried many times.
The initial trial had used Bufferin, which contains Magnesium - which may have been cause of improved heart health.
Vitamin D can also relieve some pain – but it takes longer
Vitamin D is better than baby aspirin in that it can be taken weekly or monthly, instead of daily
Vitamin D is better than baby aspirin in that people can feel the benefits in months, instead of possibly noticing a benefit in decades
Will feel the benefit in weeks if use a loading dose.

Aspirin Use to Prevent 1st Heart Attack or Stroke Should Be Curtailed, U.S. Panel Says Oct 2021

VitaminDWiki pages containing ASPIRIN in title (11 as of Oct 2021)

Daily Aspirin Is Not for Everyone, Study Suggests NY Times Jan 2012

A 2007 report by Dr. Gerald O' Malley of the Albert Einstein Medical Centers of Philadelphia found that there were over 21,000 cases of aspirin and non-aspirin salicylate poisonings reported to the United States poison centers in 2004, resulting in

I cannot imagine how Vitamin D could use the following, but. . .

Aspirin Late in Life? Healthy People May Not Need It Sept 2018

WikiPedia has the following chart 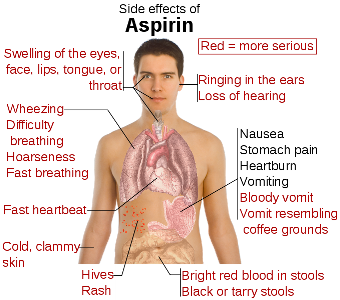 What can Vitamin D learn from Baby Aspirin         Printer Friendly PDF this page! Follow this page for updates
This page is in the following categories (# of items in each category)
Top news 889