What are the characteristics of vitamin D metabolism in opioid dependence? An exploratory longitudinal study in Australian primary care. 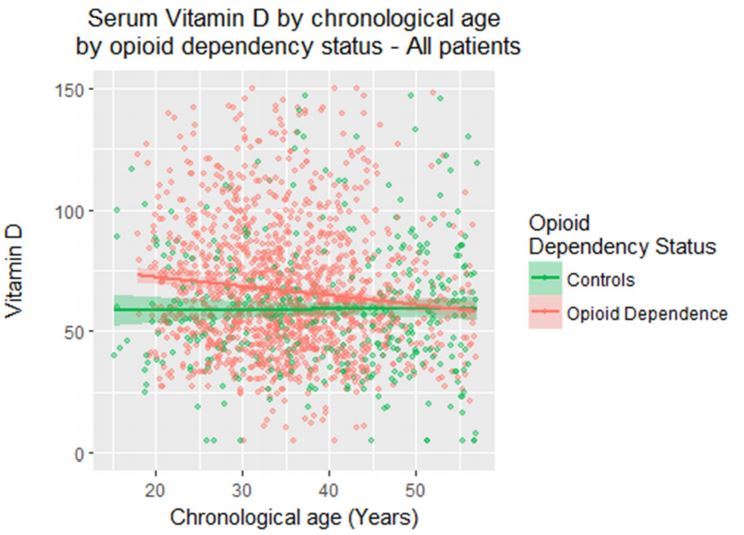 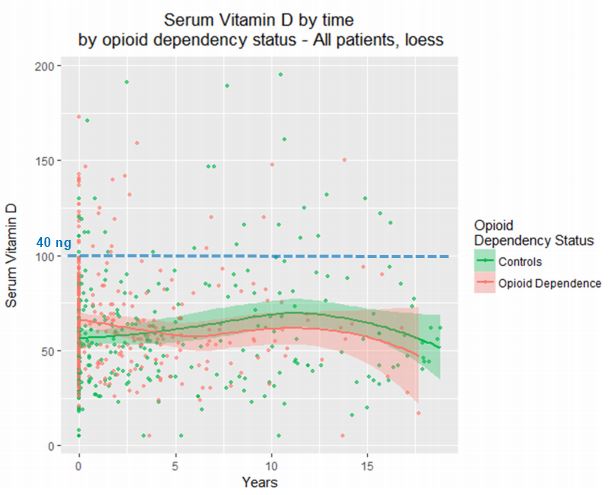 Compare vitamin D levels in opioid dependence and control population and adjust for relevant confounding effects. Nuclear hormone receptors (including the vitamin D receptor) have been shown to be key transducers and regulators of intracellular metabolism and comprise an important site of pathophysiological immune and metabolic dysregulation potentially contributing towards pro-ageing changes observed in opioid-dependent patients (ODPs).

RESULTS: Vitamin D levels were higher in the ODP (70.35±1.16 and 57.06±1.81 nmol/L, p<0.0001). The difference in ages between the two groups was handled in an age-matched case-control subanalysis and also by multiple regression. Sexes were analysed separately. The age:status (or age:time:status) was significant in case-control, cross-sectional and longitudinal analyses in both sexes (p<0.05).
Modelled vitamin D was 62.71 vs 57.81 nmol/L in the two groups (8.47% higher) . Time-dependent mixed-effects models quadratic in age outperformed linear-only models (p=0.0377). ODP vitamin D was shown to vary with age and to correlate with alanine aminotransferase establishing it as a biomarker of age in this group. Hepatitis C seronegativity was significant in regression models (from p=0.0015).

CONCLUSION:
Vitamin D was higher in ODP in both sexes in bivariate, cross-sectional, case-control and longitudinal analyses and was robust to the inclusion of metabolic and immune biomarkers. That Hepatitis C seronegativity was significant suggests opioid dependence has an effect beyond simply that of its associated hepatitides. This finding may relate to the accelerated ageing process previously described in opioid dependence.

Opioid dependency associated with vitamin D levels which are 8 % higher initially – Jan 2018         Printer Friendly PDF this page! Follow this page for updates
This page is in the following categories (# of items in each category)
Pain - chronic 146