"Palliative care (pronounced pal-lee-uh-tiv) is specialized medical care for people with serious illness. This type of care is focused on providing relief from the symptoms and stress of a serious illness. The goal is to improve quality of life for both the patient and the family."
"Both palliative care and hospice care provide comfort. But palliative care can begin at diagnosis, and at the same time as treatment. Hospice care begins after treatment of the disease is stopped and when it is clear that the person is not going to survive the illness "

Decreased use of Opiates 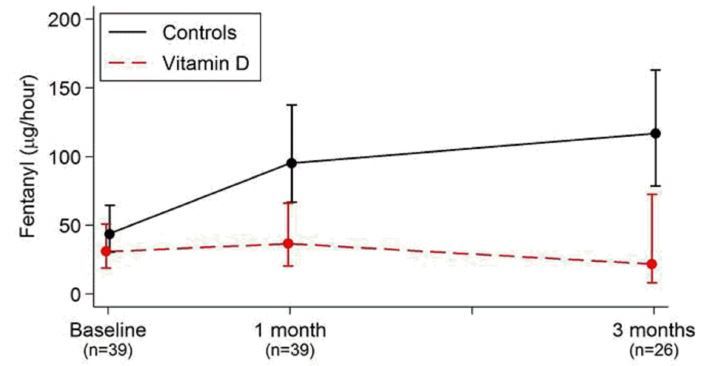 Decreased use of antibiotics 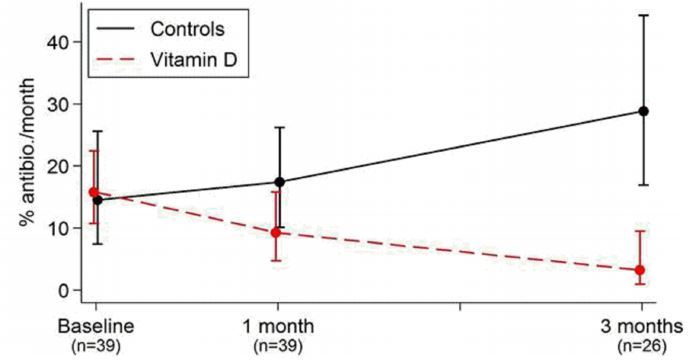 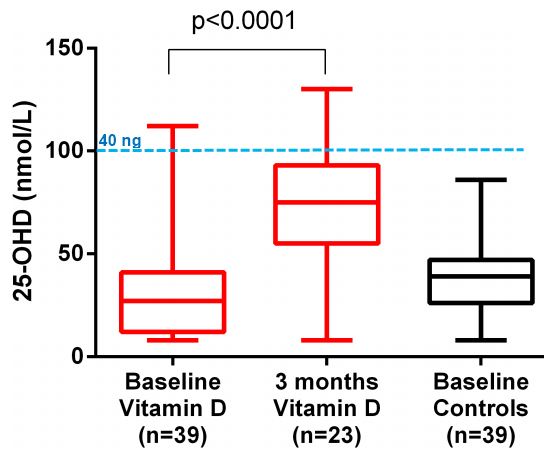 Methods
Thirty-nine palliative cancer patients with levels of 25-hydroxyvitamin D < 75 nmol/L were supplemented with vitamin D 4000 IE/day, and were compared to 39 untreated, matched “control”-patients from a previous study at the same ward. Opioid doses, antibiotic consumption and QoL-scores measured with the Edmonton Symptom Assessment Scale (ESAS) were monitored. The primary endpoint was the change from baseline after 1 and 3 months compared between the groups using linear regression with adjustment for a potential cofounding factor.

Conclusion
Vitamin D supplementation to palliative cancer patients is safe and improvement in pain management is noted as early as 1 month after treatment. Decreased infections are noted 3 months after vitamin D treatment. The results from this pilot-study have been used for the power-calculation of a future randomized, placebo-controlled, double-blind study called “Palliative-D” that will start in Nov 2017 and will include 254 palliative cancer patients.

Simple Summary
In this study, the effect of vitamin D supplementation on pain, infections, fatigue and quality of life in patients with advanced cancer with verified vitamin D deficiency was studied. To this end, a randomized controlled trial, ‘Palliative-D’, was conducted, comparing the effect of 4000 IU vitamin D3/day for 12 weeks to placebo in cancer patients admitted to palliative care. Pain was assessed as change in opioid dose and infections measured as days on antibiotics. Vitamin D-supplemented patients increased their opioid doses at a significantly slower rate than patients receiving placebo, i.e., 0.56 µg less fentanyl/h per week with vitamin D treatment. Vitamin D reduced self-assessed fatigue but did not affect antibiotic use or self-assessed Quality of life. The treatment was safe and well-tolerated. In conclusion, correction of vitamin D deficiency may have positive effects on pain and fatigue in palliative cancer patients.

Abstract
The aim of the ‘Palliative-D’ study was to test the hypothesis that correction of vitamin D deficiency reduces opioid use in cancer patients admitted to palliative care. A multicenter randomized, placebo-controlled, double-blind trial in three home-based palliative care facilities in Sweden was performed. Patients with advanced cancer and 25-hydroxyvitamin D < 50 nmol/L were randomized to vitamin D3 4000 IU/day or placebo for 12 weeks. The primary endpoint was the difference of long-acting opioid use (fentanyl ug/h) between the groups during 12 weeks, based on four time points. Secondary outcomes included changes in antibiotic use, fatigue and Quality of Life (QoL). A total of 244 patients were randomized, and 150 patients completed the 12 weeks. The major reason for drop-out was death due to cancer. The vitamin D-group had a significantly smaller increase of opioid doses compared to the placebo-group; beta coefficient −0.56 (p = 0.03), i.e., 0.56 µg less fentanyl/h per week with vitamin D treatment. Vitamin D-reduced fatigue assessed with ESAS was −1.1 points after 12 weeks (p < 0.01). Antibiotic use or QoL did not differ significantly between the groups. The treatment was safe and well-tolerated.

In conclusion, correction of vitamin D deficiency may have positive effects on opioid use and fatigue in palliative cancer patients, but only in those with a survival time more than 12 weeks

Palliative cancer benefit of 4,000 IU of Vitamin D – less opioids, infection, and CRP – Aug 2017         Printer Friendly Follow this page for updates
This page is in the following categories (# of items in each category)
Cancer - after diagnosis 91 Intervention 753