More than enough evidence on the Yellow Card system to declare the COVID-19 vaccines unsafe for use in humans. - June 9, 2021

The CDC Vaccine Adverse Event Reporting System
CDC appears to record only 1/6 the vaccine adverse events as similar systems in Europe
It apparantly takes about 30 minutes to enter a report in the CDC system
This letter highlights the many COVID-19 vaccine adverse events in the UK as of late May 2021
VAERS: 5,165 Deaths Reported Following COVID Vaccines as of May 26, 2021

Vaccination publications in VitaminDWiki 94 as of Oct 2021, which include:

&nbspDownload the PDF from VitaminDWiki
Subset Table 1. Bleeding, Clotting and Ischaemic Adverse Drug Reactions (up to 26th May 2021 - Week 18) 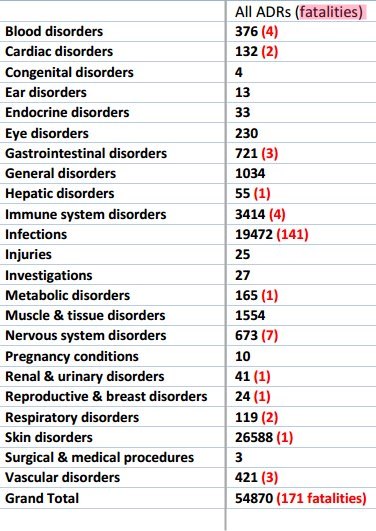 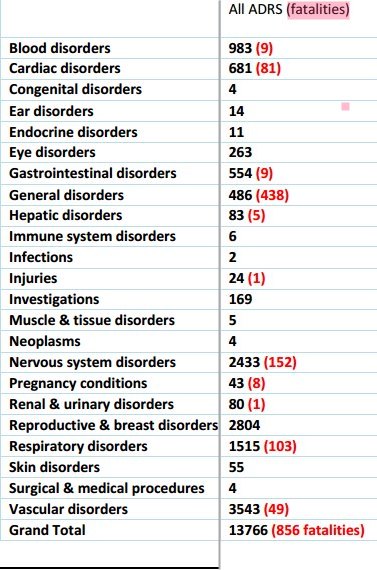 As the Director of the Evidence-based Medicine Consultancy Ltd and EbMC Squared CiC, I am writing to share with you this urgent preliminary report on the Yellow Card data up to 26th May 2021. Please note that EbMC Squared CiC is a Community Interest Company that conducts research mandated by the public and funded by public donations. We have no conflicts of interest and do not engage in industry-funded work.
The MHRA describes the purpose of its Yellow Card system as providing “an early warning that the safety of a medicine or a medical device may require further investigation. It is important for people to report problems experienced with medicines or medical devices as these are used to identify issues which might not have been previously known about.” Furthermore, the MHRA recognises that the conditions under which medicines are studied in clinical trials do not reflect how the medicines will be used in hospitals or clinical practice once they are rolled out. This means that some adverse drug reactions “may not be seen until a very large number of people have received the medicine.”
The Covid-19 vaccines were rolled out in the UK on the 8th of December 2020. As of the 6th May 2021 nearly 39 million people have received their first dose of the Covid-19 vaccine, and 24 million both doses. Sufficient data have now accumulated to get a good overview of adverse drug reactions (ADRs). I would, therefore, like to draw your attention to the high number of covid-19 vaccine-attributed deaths and ADRs that have been reported via the Yellow Card system between the 4th January 2021 and the 26th May 2021. In total, 1,253 deaths and 888,196 ADRs (256,224 individual reports) were reported during this period.
To facilitate a better clinical understanding of the nature of the adverse events occurring, primarily to inform doctors at the frontline, we have searched the Yellow Card reports using pathology-specific key words to group the data according to the following five broad, clinically relevant categories:

After running each search, we entered the results into an Excel spreadsheet, excluding ADRs that were clearly irrelevant or appeared in duplicate. These spreadsheets will be used going forward to facilitate the weekly monitoring of Yellow Card data. We recognise that keywords may need expanding to capture category relevant ADRs that may have been missed in this preliminary ADR scope and analysis.

We used the following SEARCH TERMS to identify bleeding, clotting and ischaemic ADRs: bleed, haemo*, thrombo*, emboli*, coag*, death, ischaem*, infarct*, angina, stroke, cerebrovascular, CVA.
We included the term ‘death' in this search group, as this term accounted for many reported fatalities (438) without specific details. Given the large number of fatalities without a specific cause of death, we considered that ADRs reported in this way, in particular as ‘sudden death', would be most likely to occur from haemorrhagic, thrombo-embolic or ischaemic events. Given the seriousness of this ADR, we considered it justifiable to do this pending a Freedom of Information (FOI) request to clarify the cause of death in these 438 people.
Using these search terms, 13,766 bleeding, clotting and ischaemic ADRs were identified - 856 of which were fatal. Government reports have highlighted the occurrence of cerebral venous sinus thrombosis, apparently accounting for 24 fatalities and 226 ADRs up to the 26th May 2021. However, our analysis indicates that thromboembolic ADRs have been reported in almost every vein and artery, including large vessels like the aorta, and in every organ including other parts of the brain, lungs, heart, spleen, kidneys, ovaries and liver, with life-threatening and life-changing consequences. The most common Yellow Card categories affected by these sorts of ADRs were the nervous system (152 fatalities, mainly from brain bleeds and clots), respiratory (with 103 fatalities, mainly from pulmonary thromboembolism) and cardiac categories (81 fatalities).

We used the following SEARCH TERMS to identify pain ADRs: pain, -algia.
Pain ADRs accounted for at least 157,579 ADRs (18%) in total. A large number of these were arthralgias (joint pains - 24,902 ADRs) and myalgias (muscle pains - 31,168 ADRs), including fibromyalgia (270 ADRs), a long-term condition that causes pain all over the body. Among Congenital Disorders (usually conditions present from birth) there were 11 reports of Paroxysmal Extreme Pain Disorder (PEPD), which is an extremely rare inherited disease caused by a genetic mutation leading to dysfunction of voltage-gated sodium channels. The head was the most common location for pain, but abdominal pain, eye pain, chest pain, pain in extremities, and anywhere else that pain can be imagined was reported. Headaches were reported more than 90,000 times and were associated with death in four people (excluding deaths reported to be from other causes, that may also have involved headache).

In addition to examining ADRs in the NERVOUS SYSTEM DISORDERS (category), we used the following SEARCH TERMS to identify neurological ADRS specifically involving paralysis, neurological degeneration, and convulsive ADRs as follows: (paralysis), palsy, paresis, neuropathy, incontinence, Guillain-Barre, Miller Fisher, multiple sclerosis; (neurodegeneration) encephalopathy, dementia, ataxia, spinal muscular atrophy, delirium, Parkinson; (seizure), convuls, seizure, fit, -lepsy
Twenty-one percent (185,474) of ADRs were categorized as Nervous System Disorders in the Yellow Card system. A wide variety of neurological ADRs were noted, including 1,992 ADRs involving seizures and 2,357 ADRs involving some form of paralysis, including Bell's palsy (626 ADRs). Other ADRs involving encephalopathy (18), dementia (33), ataxia (34), spinal muscular atrophy (1), Parkinson's (18) and delirium (504) may reflect post-vaccination neurodegenerative pathology.
The majority of fatalities associated with Nervous System ADRs occurred as a result of central nervous system haemorrhages - 127 fatalities out of the 186 fatalities reported as Nervous System fatalities. These 127 have been counted in group A (Bleeding, clotting and Ischaemic ADRs).
More information is needed to determine the extent of the morbidity associated with this alarmingly large category of ADRs. Access to the full Yellow Card database and consultation with clinical specialists, along with follow up of these reports, is urgently needed.

Given that vaccinated pregnant women comprise a small proportion of the vaccinated population in the UK up to 26th May 2021, there appear to be a high number of Pregnancy ADRs (307 ADRs), including one maternal death, 12 stillbirths (reported as 6 stillbirths and 6 foetal deaths, but only 3 listed as fatal⑺)，one newborn death following preterm birth, and 150 spontaneous abortions. We have submitted a FOI request as to the cause of the maternal death and will look into pregnancy and congenital ADRs in more detail in our next report.

Limitations of this rapid report

This report is not comprehensive, and analysis of Yellow Card data is ongoing. The process of defining the search terms was iterative and we trust that it provides a basis for discussion among clinicians and scientists. We have not compared the frequencies of ADRs between different vaccines; however, our impression is that ADRs were not limited to any particular vaccine brand (AstraZenenca, Pfizer and Moderna) or type (mRNA and DNA) currently used in the UK. UK ADR data mirror data reported on the World Health Organization's pharmacovigilance database
(www.Vigiaccess.org). On the latter, most reported ADRs to date (941,774 ADRs and 5,474 deaths) have occurred among individuals in the 18 to 44 years and 45 to 64 years of age categories (38% and 35%, respectively); the vast majority (72%) of reported ADRs have occurred among women. Unfortunately, we have been unable to examine the UK Yellow Card data according to age and gender due to lack of data availability.
We are aware of the limitations of pharmacovigilance data and understand that information on reported Adverse Drug Reactions should not be interpreted as meaning that the medicine in question generally causes the observed effect or is unsafe to use. We are sharing this preliminary report due to the urgent need to communicate information that should lead to cessation of the vaccination roll out while a full investigation is conducted. According to the recent paper by Seneff and Nigh ⑴，potential acute and long-term pathologies include:

The nature and variety of ADRs reported to the Yellow Card System are consistent with the potential pathologies described in this paper and supported by other recent scientific papers on vaccine-induced harms, which are mediated through the vaccine spike protein product (2,3). It is now apparent that these products in the blood stream are toxic to humans. An immediate halt to the vaccination programme is required whilst a full and independent safety analysis is undertaken to investigate the full extent of the harms, which the UK Yellow Card data suggest include thromboembolism, multisystem inflammatory disease, immune suppression, autoimmunity and anaphylaxis, as well as Antibody Dependent Enhancement (ADE).
Due to the need for expedience, we have not detailed all ADRs in this preliminary report. The existing Yellow Card data covering just under a five-month period indicate that the extent of morbidity and mortality associated with the COVID-19 vaccines is unprecedented.
Age and gender specific data, as well as the time from vaccination, are required to further our analysis of these data and we have sent Freedom of Information Requests (FOIRs) to the MHRA in this regard.
In addition, urgent independent expert evaluation and discussion is required to assess whether the novel vaccines may be causing gene mutations among recipients, as suggested by the occurrence of usually extremely rare genetic disorders, such as Paroxysmal Extreme Pain Disorder (PEPD). In addition to the 11 cases of PEPD on the Yellow Card system, there are currently 12 reports of this extremely rare condition on the WHO's Vigiaccess.org database and 10 on the European Medicines Agency's (EUDRA) pharmacovigilance database. Are these ADRs occurring in babies of vaccinated pregnant women, or spuriously among vaccinated adults? This question needs urgent attention.
As pharmacovigilance data are known to be substantially under-reported, we recommend that the MHRA urgently publicises these ADR data and assists people with their ADR reporting, to facilitate full elucidation and clarification of the extent of the problem.
The MHRA now has more than enough evidence on the Yellow Card system to declare the COVID-19 vaccines unsafe for use in humans. Preparation should be made to scale up humanitarian efforts to assist those harmed by the COVID-19 vaccines and to anticipate and ameliorate medium to longer term effects. As the mechanism for harms from the vaccines appears to be similar to COVID-19 itself, this includes engaging with numerous international doctors and scientists with expertise in successfully treating COVID-19.
There are at least 3 urgent questions that need to be answered by the MHRA:

EbMC Squared CiC remains at your service to assist with further analysis. We kindly request full access to the Yellow Card database with immediate effect to enable a comprehensive, independent and accurate evaluation of the Yellow Card data, which will be undertaken in collaboration with clinical experts.

"A yellow card is used to warn a player to behave after an aggressive or a non-deliberate violent act, and there is no immediate punishment."
https://yellowcard.mhra.gov.uk/ 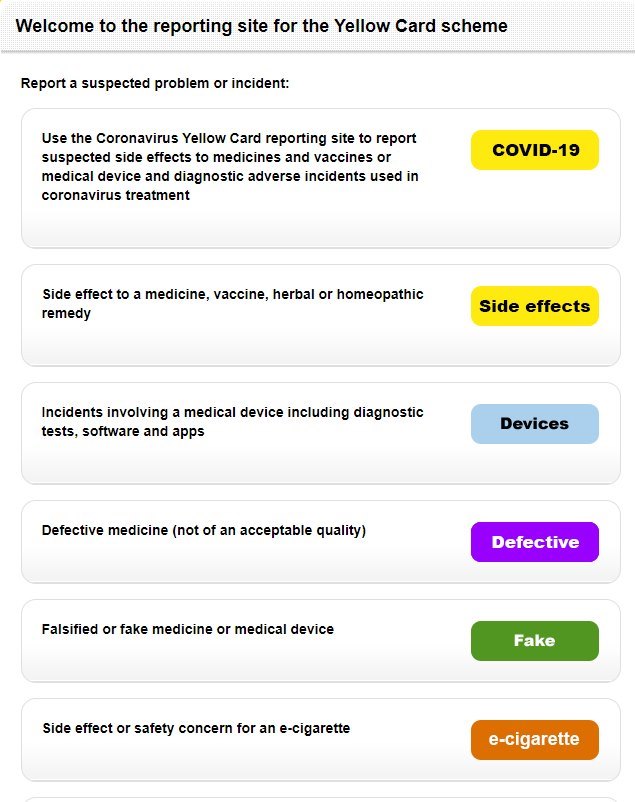 More than enough evidence on the Yellow Card system to declare the COVID-19 vaccines unsafe for use in humans. - June 9, 2021         Printer Friendly PDF this page! Follow this page for updates
This page is in the following categories (# of items in each category)
Top news 884 Virus 1044