Review of Dietary Recommendations for Twin Pregnancy: Does Nutrition Science Keep Up with the Growing Incidence of Multiple Gestations?

Recommendations for nutrition and the use of dietary supplements for pregnant women are updated on regular basis but it remains to be seen to what extent they may be applicable in twin pregnancies. The aim of this narrative review is to present the current state of knowledge about the energy and nutrient demand in twin pregnancy. There is general consensus in literature that the energy demand is higher than in a singleton pregnancy, but there is a lack of position statements from scientific societies on specific energy intake that is required. In turn, recommended maternal weight gain, which favors the normal weight of the neonate, has been determined. There is even a larger knowledge gap when it comes to vitamins and minerals, the body stores of which are theoretically used up faster. The greatest number of studies so far focused on vitamin D, and most of them concluded that its concentration in maternal blood is lower in twin as compared to singleton pregnancy. Few randomized studies focus on iron supplementation and there are no other studies that would assess dietary interventions. In light of a growing incidence of multiple pregnancies, more studies are necessary to establish the nutritional demands of the mother and the course of action for adequate supplementation.
&nbspDownload the PDF from VitaminDWiki

Over the past 30 years, there has been a considerable increase in the number of multiple pregnancies worldwide, which mainly applies to dizygotic pregnancies. In the USA, in 2009 compared to the 1980s, the number of twin pregnancies increased by 76%; the situation was similar in Australia (66%) [1,2]. Currently, it is estimated that in the United States, twin births account for 3.0-3.5% of all births (one twin birth out of approx. 30 births), much like in France and Australia—more than 3%. A lower proportion is observed in Central Africa (1.8%) and Great Britain (1.5%), while in East Asia and Oceania, the incidence of twin pregnancies has been stable over the years and amounts to <1% of all births [2-9]. This upward trend has also been observed in Poland. According to the Yearbook of Statistics Poland, in 1990, twin pregnancies accounted for 1% of all births, while in 2018,1.3%, which corresponds to 4925 births [10,11].
Among the reasons for the increased number of multiple pregnancies, several factors are taken into consideration. The main one is the use of

As an example, in 2002 in the USA, the number of twin pregnancies in women aged > 40 was 11 times higher compared to 1980 [17]. In Poland, in 1990, twin pregnancies after the age of 35 constituted 11.5% of all twin pregnancies, while in 2018, it was 23.3% [10,11]. The mother's pre-pregnancy obesity can also be of considerable importance. It is estimated that with a body mass index (BMI) of >30, the risk of a twin pregnancy grows by 40%, which, in times of globally increasing obesity, can be an important factor conducive tomultiple pregnancies [9,14-16]. Literature also investigates pre-pregnancy folic acid use and mandatory folic acid food fortification introduced in many countries [2,18-20].
A multiple pregnancy is associated with an increased risk of its abnormal course.
This mostly applies to 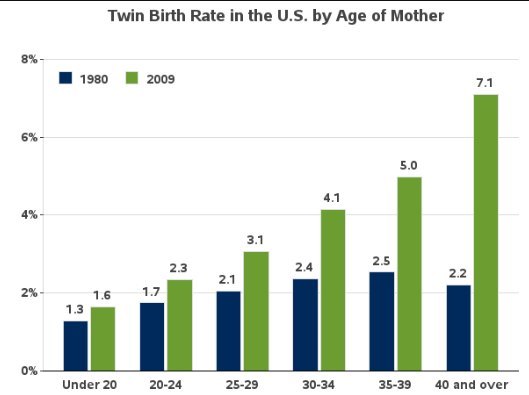 Not by just start taking Vitamin D daily before conception for a month or two.
Need to have a loading dose to restore vitamin d levels quickly

It appears that over 1 million Vitamin D loading doses have been taken
Doses ranged from 100,000 to 600,000 IU over a period of a day to a month
No reports of serious adverse reactions
Many studies report on the benefits resulting from loading doses