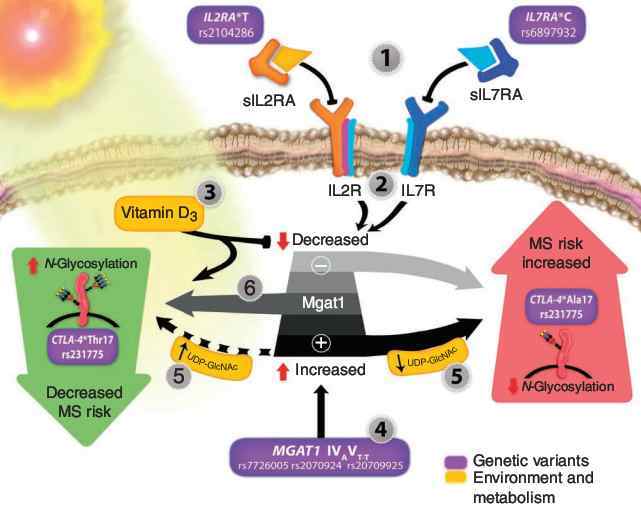 “Looking at human cells, they find that a deficiency of Vitamin D3 (found in milk), variations in gene networks and individual cell tendencies to produce sugars related to glucosamine, combine to affect the type of immune cells produced by the body. Immune cells attack the nerves in multiple sclerosis and it appears that a combination of all these factors disrupts these cellular sugars, producing the wrong kind of immune cells, which may lead to the disease.

The study serves as a model for other complicated diseases, the study authors suggest. The production of cell sugars, or glycobiology, takes place independently of factors determined by genes, they note, which is why genome-wide studies of multiple sclerosis may not have picked up on this facet of the disease.”

Clipped from The Epoch Times

“The new findings show both vitamin D3 and GlcNAc can reverse the effects of the four genes, leading to normal addition of sugars to proteins.

"This suggests that oral vitamin D3 and GlcNAc may serve as the first therapy for MS that directly targets an underlying defect promoting disease," Demetriou said.”

The articles in both MS and Genetics are:

The articles in both MS and Vitamin D Receptor are:

The articles in both MS and Vitamin D Binding Protein:

Vitamin D targets 4 MS genes – May 2011         Printer Friendly PDF this page! Follow this page for updates
This page is in the following categories (# of items in each category)

Increased risk of multiple sclerosis risk in African Americans due to genes –...