The association between neonatal vitamin D status and risk of schizophrenia 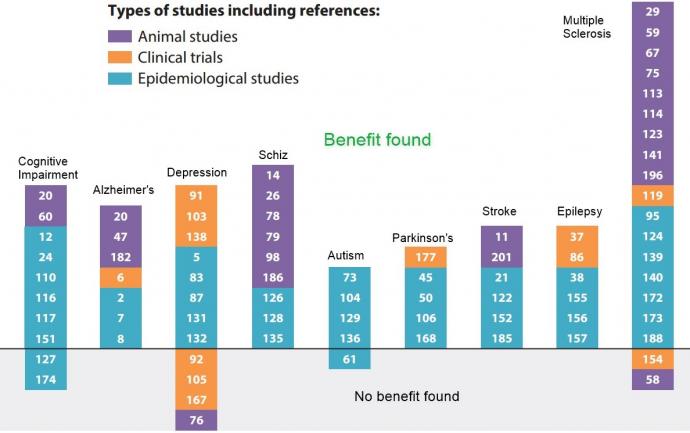 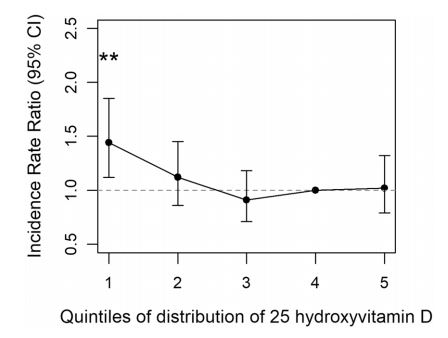 Clues from the epidemiology of schizophrenia, such as the increased risk in those born in winter/spring, have led to the hypothesis that prenatal vitamin D deficiency may increase the risk of later schizophrenia. We wish to explore this hypothesis in a large Danish case-control study (n = 2602). The concentration of 25 hydroxyvitamin D (25OHD) was assessed from neonatal dried blood samples. Incidence rate ratios (IRR) were calculated when examined for quintiles of 25OHD concentration. In addition, we examined statistical models that combined 25OHD concentration and the schizophrenia polygenic risk score (PRS) in a sample that combined the new sample with a previous study (total n = 3464; samples assayed and genotyped between 2008-2013).
Compared to the reference (fourth) quintile, those in the lowest quintile (<20.4 nmol/L) had a significantly increased risk of schizophrenia (IRR = 1.44, 95%CI: 1.12–1.85). None of the other quintile comparisons were significantly different. There was no significant interaction between 25OHD and the PRS.

Neonatal vitamin D deficiency was associated with an increased risk for schizophrenia in later life.
These findings could have important public health implications related to the primary prevention of schizophrenia.

Schizophrenia 44 percent more likely if low vitamin D at birth (8 ng) – Dec 2018         Printer Friendly PDF this page! Follow this page for updates
This page is in the following categories (# of items in each category)
Cognitive 309