Danish study of childhood diseases vs vitamin D fortification – May 2013

The influence of early exposure to vitamin D for development of diseases later in life.

Vitamin D deficiency is common among otherwise healthy pregnant women and may have consequences for them as well as the early development and long-term health of their children. However, the importance of maternal vitamin D status on offspring health later in life has not been widely studied. The present study includes an in-depth examination of the influence of exposure to vitamin D early in life for development of fractures of the wrist, arm and clavicle; obesity, and type 1 diabetes (T1D) during child- and adulthood.
METHODS/DESIGN:

The study is based on the fact that in 1961 fortifying margarine with vitamin D became mandatory in Denmark and in 1972 low fat milk fortification was allowed. Apart from determining the influences of exposure prior to conception and during prenatal life, we will examine the importance of vitamin D exposure during specific seasons and trimesters, by comparing disease incidence among individuals born before and after fortification. The Danish National databases assure that there are a sufficient number of individuals to verify any vitamin D effects during different gestation phases. Additionally, a validated method will be used to determine neonatal vitamin D status using stored dried blood spots (DBS) from individuals who developed the aforementioned disease entities as adults and their time and gender-matched controls.
DISCUSSION:

The results of the study will contribute to our current understanding of the significance of supplementation with vitamin D. More specifically, they will enable new research in related fields, including interventional research designed to assess supplementation needs for different subgroups of pregnant women. Also, other health outcomes can subsequently be studied to generate multiple health research opportunities involving vitamin D. Finally, the results of the study will justify the debate of Danish health authorities whether to resume vitamin D supplementation policies. 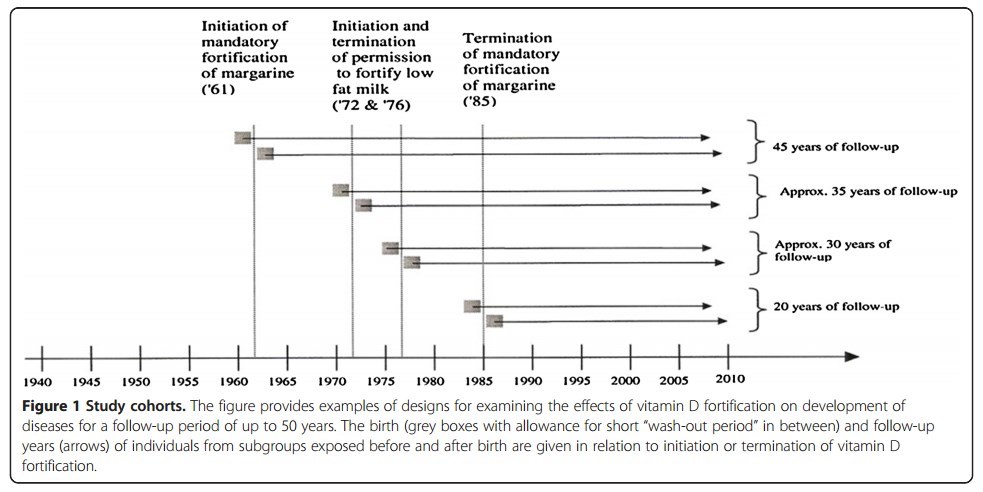 Danish study of childhood diseases vs vitamin D fortification – May 2013         Printer Friendly PDF this page! Follow this page for updates
This page is in the following categories (# of items in each category)
Vitamin D in Europe 217 Infant-Child 735 Fortification with Vitamin D 124