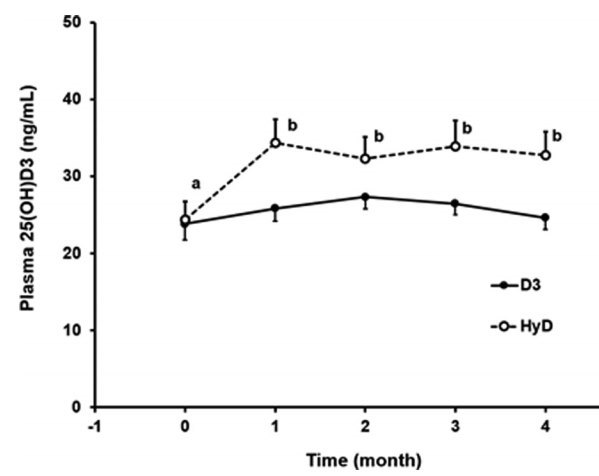 Notes:
1) Dogs were getting Calcitriol 3 times a day (not just once a day like humans)
2) Response might have been faster than a month – levels were only measured monthly
3) Humans also appear to have a fast response to Calcitriol than Vitamin D
4) HyD has been produced by DSM for animals for many decades
5) DSM is starting to produce HyD for humans in 2021
6) HyD = Calcifediol = Calcitriol = semi-activated vitamin D = (25(OH)D) = blood level measurement of Vitmin D

The 20 most recently changed items in Calcidiol Category

Calcidiol increased blood levels of Vitamin D in one month (dogs) – Feb 2021         Printer Friendly PDF this page! Follow this page for updates
This page is in the following categories (# of items in each category)
Veterinary and Vitamin D 138 Calcidiol 38

Calcidiol may be 5X more effective than Vitamin D3 – June 2012Fast-acting vitamin D to be produced for humans (not just animals) – Jan 2021Is HyD (25(OH)D) a better form of vitamin D for some animals and maybe humans...Response to weekly Calcifediol in 4 months - RCT Aug 2022Weekly response to semi-activated vitamin D slightly better than standard – R...