Trends in Laboratory Test Volumes for Medicare Part B Reimbursements, 2000-2010. 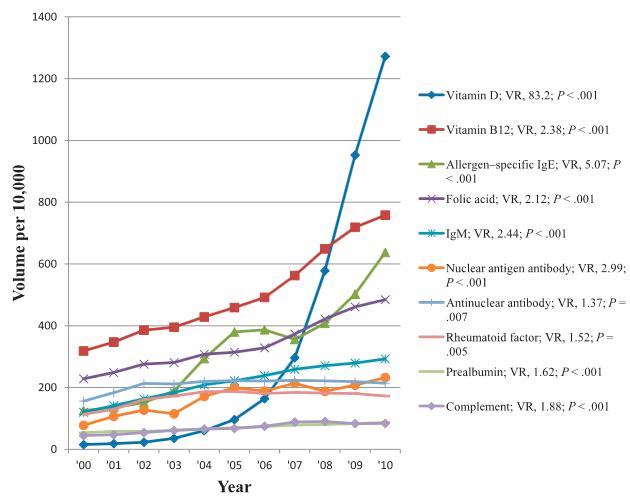 [Extrapolation of this curve is at the bottom of this page]

Context.-Changes in reimbursements for clinical laboratory testing may help us assess the effect of various variables, such as testing recommendations, market forces, changes in testing technology, and changes in clinical or laboratory practices, and provide information that can influence health care and public health policy decisions. To date, however, there has been no report, to our knowledge, of longitudinal trends in national laboratory test use.

Design.-Laboratory test reimbursement volumes per 10 000 enrollees in Medicare Part B were obtained from the Centers for Medicare & Medicaid Services (Baltimore, Maryland). The ratio of the most recent (2010) reimbursed test volume per 10 000 Medicare enrollees, divided by the oldest data (usually 2000) during this decade, called the volume ratio, was used to measure trends in test reimbursement. Laboratory tests with a reimbursement claim frequency of at least 10 per 10 000 Medicare enrollees in 2010 were selected, provided there was more than a 50% change in test reimbursement volume during the 2000-2010 decade. We combined the reimbursed test volumes for the few tests that were listed under more than one code in the Current Procedural Terminology (American Medical Association, Chicago, Illinois). A 2-sided Poisson regression, adjusted for potential overdispersion, was used to determine P values for the trend; trends were considered significant at P < .05.

Conclusions.-Although reimbursement volumes increased for most of the selected tests, other tests exhibited statistically significant downward trends in annual reimbursement volumes. The observed changes in reimbursement volumes may be explained by disease prevalence and severity, patterns of drug use, clinical or laboratory practices, and testing recommendations and guidelines, among others. These data may be useful to policy makers, health systems researchers, laboratory directors, and industry scientists to understand, address, and anticipate trends in laboratory testing in the Medicare population.

Evidence of overtesting for vitamin D in Australia: an analysis of 4.5  years of Medicare Benefits Schedule (MBS) data

Objective To comprehensively examine pathology test utilisation of 25-hydroxyvitamin D (25(OH)D) testing in each state of Australia to determine the cost impact and value and to add evidence to enable the development of vitamin D testing guidelines.

Design Longitudinal analysis of all 25(OH)D pathology tests in Australia.

Results 4.5 million tests were performed between 1 April 2006 and 30 October 2010. 42.9% of individuals had more than one test with some individuals having up to 79 tests in that period. Of these tests, 80% were ordered by general practitioners and 20% by specialists.
The rate of 25(OH)D testing increased 94-fold from 2000 to 2010. Rate varied by state whereby the most southern state represented the highest increase and northern state the lowest increase. In contrast, the rate of a universal pathology test such as FBC remained relatively stable increasing 2.5-fold. Of concern, a 0.5-fold (50%) increase in bone densitometry was seen.

Conclusions The marked variation in the frequency of testing for vitamin D deficiency indicates that large sums of potentially unnecessary funds are being expended. The rate of 25(OH)D testing increased exponentially at an unsustainable rate. Consequences of such findings are widespread in terms of cost and effectiveness. Further research is required to determine the drivers and cost benefit of such expenditure. Our data indicate that adoption of specific guidelines may improve efficiency and effectiveness of 25(OH)D testing. 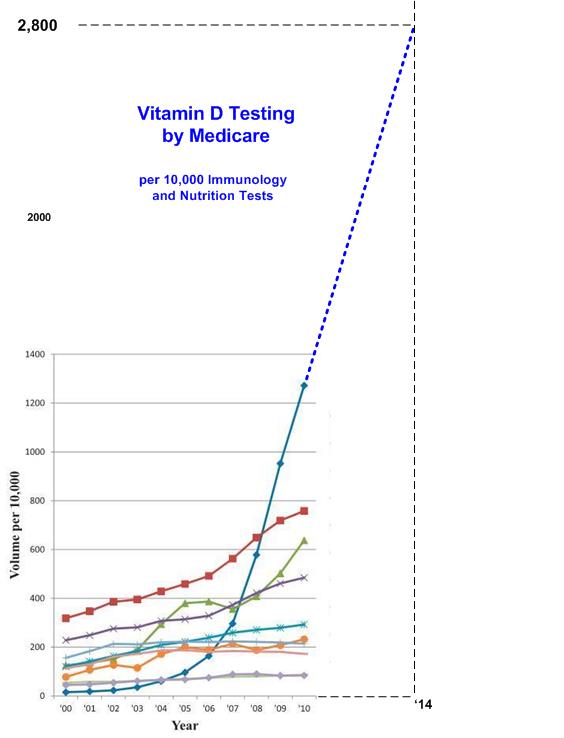 80 X increase in Vitamin D testing in Australia in a decade - June 2013         Printer Friendly PDF this page! Follow this page for updates
This page is in the following categories (# of items in each category)
Tests for Vitamin D 150