Background: Testing for 25-hydroxyvitamin D [25(OH)D] has increased dramatically in recent years. The present report compares overall utilization and results for 25(OH)D orders at two academic medical centers - one in New York and one in Iowa - in order to characterize the vitamin D status of our inpatient and outpatient populations. Results are also compared to those from a national reference laboratory to determine whether patterns at these two institutions reflect those observed nationally.

Results:The majority of tests were ordered on females and outpatients. Average serum 25(OH)D levels were higher in female versus male patients across most ages in the WCMC, UIHC, and ARUP datasets. As expected, average serum 25(OH)D levels were higher in outpatients than inpatients. Serum 25(OH)D levels showed seasonal periodicity, with average levels higher in summer than winter and correlating to regional UV index. Area plots demonstrated a peak of increased 25(OH)D insufficiency / deficiency in adolescent females, although overall worse 25(OH)D status was found in male versus female patients in the WCMC, UIHC, and ARUP datasets. Surprisingly, improved 25(OH)D status was observed in patients starting near age 50. Finally, chart review of WCMC and UIHC datasets revealed over-supplementation (especially of > 50,000 IU weekly doses) in the rare cases of very high 25(OH)D levels. General nutritional deficiency and/or severe illness was found in most cases of severe 25(OH)D deficiency.

Conclusions: 25(OH)D status of patients seen by healthcare providers varies according to age, gender, season, and patient location. Improved 25(OH)D status was observed later in life, a finding that may reflect the previously described increased use of vitamin D-containing supplements in such populations. Severe vitamin D deficiency is much more common than vitamin D toxicity.

The total number of monthly 25(OH)D orders increased dramatically over the interval of time studied at both WCMC (Figure 1A) and UIHC (Figure 1B). This increase was most prominent between 2008 and 2010 at both institutions (ex. 2008 to 2009 annual growth rates were 115% at WCMC and 52% at UIHC).

Figure 2 25(OH)D immunoassay - average concentration by age and sex - results for all ages. 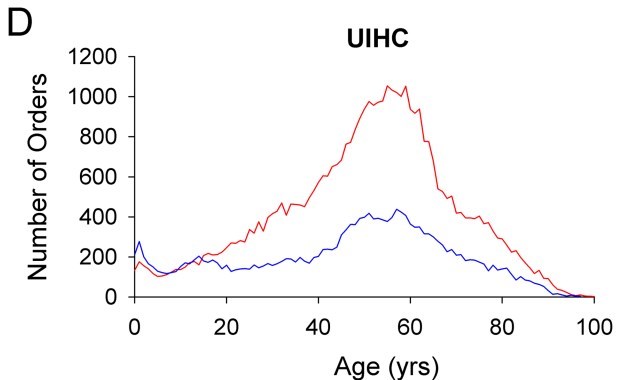 Average 25(OH)D results at WCMC (A), UIHC (B), and ARUP (C) by age and sex (female = red lines; male = blue lines). Variability at young and old ages (particularly A and B ) may be due to comparatively small n-values (see Figure 1C,D)._
Average 25(OH)D results by decade of life (with SD) is presented in Figure 3. While the SD of results within age groups (by gender) is large with overlapping error bars, statistically significant differences were found between female and male patients at most ages. At WCMC
(Figure 3A), UIHC (Figure 3B), and ARUP (Figure 3C), average 25(OH)D results were
significantly higher in females than males at most ages (notable exception ARUP 0-9 yr olds, Figure 3 C), although this trend was more pronounced at WCMC and ARUP versus UIHC. 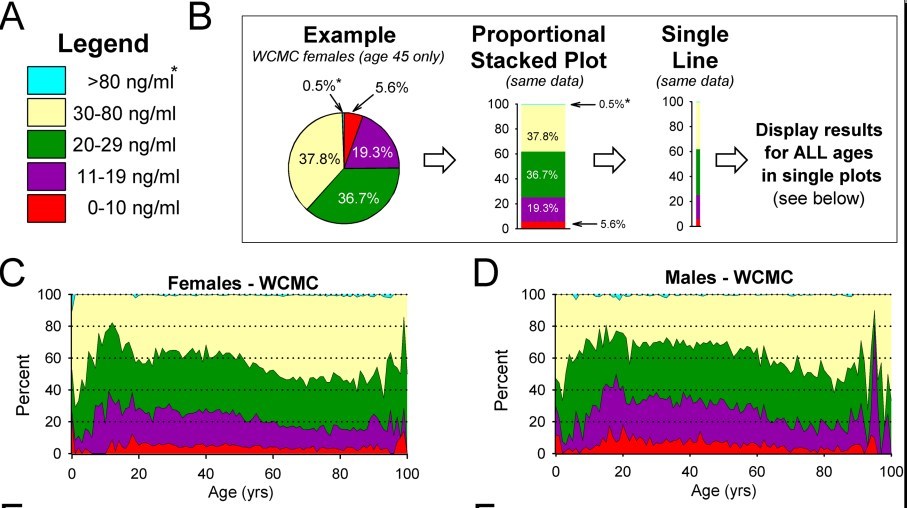 Figure legend showing the colors representing reference intervals used in B through H. An asterisk (*) is indicated next to the >80 ng/mL intervals (blue) in A and B, as this interval often contains too few specimens to be easily visible at this magnification (also evident in C through H). B. Presentation of population data as area plots. For any given group (for example, WCMC female patients age 45 shown here) the percent of patients that fall into specific reference intervals can be represented as a pie chart (B, left example). To the right of the pie chart is a "proportional stacked plot" (B, middle) that shows the same data, but now stacked by color-coded reference intervals (low to high) such that the sum of all areas equals 100%. These data can also be presented as a narrower stacked color-coded "single line" (B, right). Graphing "single line" area plots for all ages (aligned by increasing age) produce the area plots shown below. C-H. Area plots show the reference interval distributions for all ages (0-100 yrs; 1 yr bins) in females (C, E, G) and males (D, F, H) at WCMC (C,D), UIHC (E,F) and ARUP (G,H). The UIHC dataset does not include any males greater than 97 years old (F). Overlying reference lines (dotted) have been added at 20% intervals to all area plots (C-H) to facilitate comparison across graphs.
A peak of sub-optimal 25(OH)D status is again evident in female adolescents (see Figure 5G ARUP data), although in general 25(OH)D status is lower in male patients in the WCMC, UIHC, and ARUP datasets (as defined by upper border of magenta interval, Figure 5C-H). A relative stability of 25(OH)D status is again evident between the ages of approximately 2050 years old in WCMC (Figure 5C,D), UIHC (Figure 5E,F), and ARUP (Figure 5G,H) datasets. An increase in optimal 25(OH)D levels (yellow shading) was observed after approximately age 50 in the WCMC, UIHC, and ARUP datasets.

The WCMC inpatient and outpatient electronic health systems permitted clinicians to electronically order 25(OH)D by immunoassay and/or 25(OH)D by LC-MS/MS, as described in the Methods section. Given the availability of both assays, in our dataset review we identified 443 cases in which both immunoassay and LC-MS/MS were ordered by clinicians on the same specimen. Analysis of these paired results (Figure 6A), revealed a correlation coefficient (R) of 0.85 and an overall bias (LC-MS/MS to immunoassay) of 3.5 ng/ml (11.5%). As the LC-MS/MS assays were reported with three components - total 25(OH)D and fractionated 25(OH)D2 and 25(OH)D3 - it was possible to plot 25(OH)D2 versus 25(OH)D3 for specimens in which LC-MS/MS was ordered (n = 8,439). This analysis (Figure 6B) revealed that in the majority of specimens (76.4%; n = 6,445; overlapping red dots), 25(OH)D2 was not quantifiable while 25(OH)D3 was quantifiable. In a small minority of specimens (0.89%; n = 75; green dots), 25(OH)D2 was quantifiable while 25(OH)D3 was not quantifiable. In a smaller minority of specimens (0.20%; n =17; overlapping black dot), neither were quantifiable. In the remaining specimens (22.5%; n = 1,902; blue dots), both 25(OH)D2 and 25(OH)D3 were quantifiable.

Chart review was performed on all UIHC and WCMC patients who had 25(OH)D levels of 100 ng/mL or greater (see Table 3).
At UIHC, over the nearly 13 years of results reviewed,

Interestingly, only 3 patients out of the 109 total who had 25(OH)D of 100 ng/mL or greater had hypercalcemia (defined as above upper limit of age-specific reference range for total and/or ionized calcium). Only one of these patients was hospitalized for management of hypercalcemia - a 70 year old female with dementia and acute renal failure in addition to hypercalcemia with a 25(OH)D level of 194 ng/mL.
There were no cases of vitamin D-based rodenticide poisoning in the UIHC dataset.

It is tempting to speculate that differences in 25(OH)D levels between females and males could also be due to differences in circulating vitamin D binding protein (DBP; also known as Gc globulin). For example, some previous studies have found higher circulating DBP levels in women versus men [37,38], including higher levels in pregnant women [9,38]. Interestingly, two prior studies have not shown a correlation between DBP levels and age, although their population sizes [n = 100 participants, men >45 years old and women >55 year old, ref [[37]; n = 228 participants, age ranges 18-69, ref [[38]] may theoretically preclude the ability to see any subtle trends if present. Furthermore, one of these studies actually demonstrated lower 25(OH)D levels in women versus men [37]. Until clinically-approved

Vitamin D test statistics: recent increase, esp. middle age, most under 30ng – Nov 2013         Printer Friendly PDF this page! Follow this page for updates
This page is in the following categories (# of items in each category)
Deficiency of Vitamin D 410 Tests for Vitamin D 150