The effect of vitamin D supplement on the score and quality of sleep in 20-50 year-old people with sleep disorders compared with control group.

Description of the study at Examine.com

includes the following data (made into a table by VitaminDWiki)

&nbspDownload the PDF from SciHub via VitaminDWiki 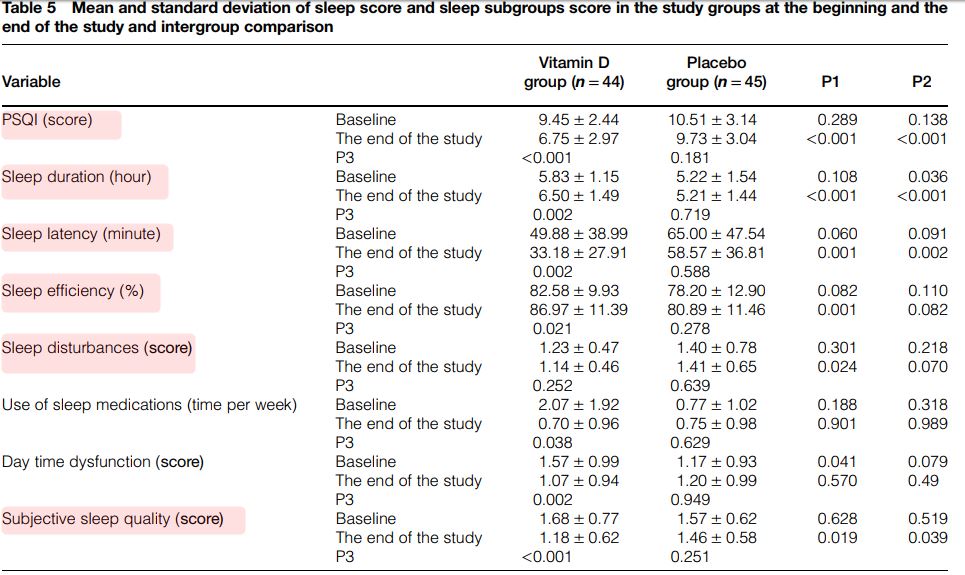 METHODS:
This double blind, clinical trial was performed in November 2015-February 2016 on 89 people with sleep disorders based on Petersburg's Sleep Index. Patient samples were divided randomly into two groups: intervention and placebo. At the end of the study, the data on 89 subjects (44 in intervention group and 45 people in placebo group) were examined. Intervention group received a 50 000-unit vitamin D supplement, one in a fortnight for 8 weeks. Meanwhile, placebo group received placebo. Before and after intervention, Petersburg's Sleep Quality Questionnaire, International Physical Activity Questionnaire, general information questionnaire, sun exposure, vitamin D serum level and 3-day food record questionnaire were assessed and recorded for all participants. To analyze data, t-test, chi square, ANCOVA, U-Mann-Whitney and Wilcoxon statistical tests were used.

FINDINGS:
Based on the results of the present study, at the end of the study sleep score (PSQI) reduced significantly in vitamin recipients as compared with placebo recipients (P < 0.05). This difference was significant even after modifying confounding variables (P < 0.05).

Sleeps disorders nicely treated by Vitamin D (50,000 IU bi-weekly) – RCT May 2017         Printer Friendly PDF this page! Follow this page for updates
This page is in the following categories (# of items in each category)
Intervention 680 Sleep 82 Intervention - non daily 213