Vitamin D paradox – Blacks need Vit D for health, but not as much D for strong bones – May 2018 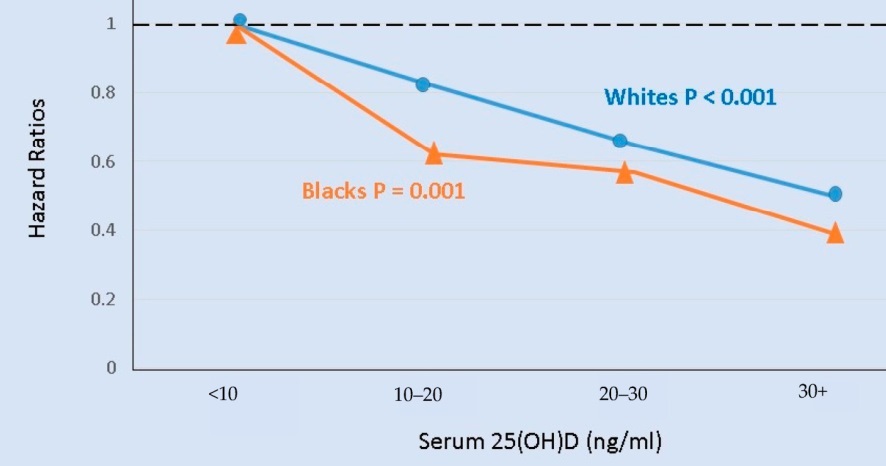 Items in both categories Bone and Skin-dark are listed here:

A central theme throughout the discussions was that there may be many factors that impact Vitamin D levels in Black Americans and understanding these factors may be key to understanding mechanisms for improving bone health in all populations. Data presented showed that although adiposity, skin pigmentation, vitamin D binding protein polymorphisms, and genetics all contributed to differences in 25(OH)D levels in Black vs. White Americans, no one factor alone could fully explain the vitamin D paradox in Black Americans. However, the panelists did agree that the paradox is significant and warrants further investigation.
There was consensus that Black Americans gained no skeletal benefits from high doses of vitamin D supplementation, and that high levels of the biomarker of vitamin D status, serum 25-hydroxyvitamin D or 25(OH)D, in this population are almost certain to result in adverse effects. Some panelists proposed that additional studies are needed so that the Institute of Medicine (IOM) can better define the safe upper limits of vitamin D intake in this and other subpopulations. Others suggested a need for better, more generalizable biomarkers of bone health to advance the science.

Vitamin D paradox – Blacks need Vit D for health, but not as much D for strong bones – May 2018         Printer Friendly PDF this page! Follow this page for updates
This page is in the following categories (# of items in each category)
Skin - Dark 441 Bone - Health 284

Blacks may not need as much Vitamin D (for their bones)Race changes the risk of various health problems, but many questions remain –...