Items in both categories Obesity and Skin-Dark are listed here: 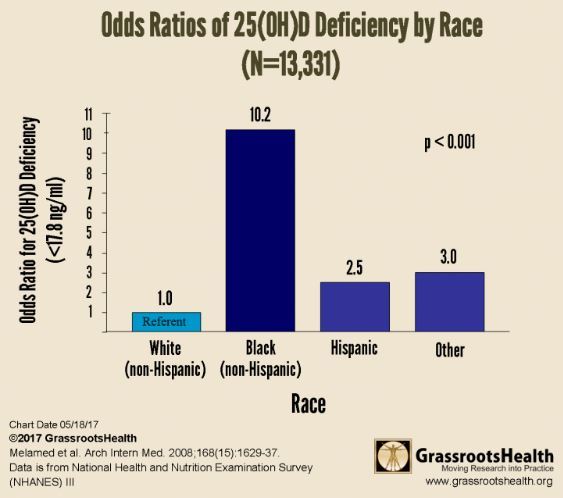 To the Editor:
The recent paper by Nassour and colleagues reported race/ ethnicity disparities in ampullary cancer survival. Median survival times were

Some factors related to survival such as socioeconomic status and treatment utilization were mentioned but thought not to explain all of the disparities.
One factor overlooked is the race/ethnicity prevalence of obesity. Obesity is an important risk factor for adverse effects on the gastrointestinal tract2 and cancer in general.3 In the period 2011-2014,
obesity rates in the US were

Another overlooked factor is vitamin D status. There is mounting evidence that vitamin D reduces incidence and mortality rates for many types of cancer, and the mechanisms whereby vitamin D reduces risk of cancer and increases survival are well known.5-8 Vitamin D status has been suggested to explain the portion of reduced survival for blacks compared to whites for many types of cancer.9
Older black Americans have mean 25-hydroxyvitamin D concentrations of about

Blacks are more obese, have lower Vitamin D, and have more Cancer etc. than whites – Feb 2018         Printer Friendly PDF this page! Follow this page for updates
This page is in the following categories (# of items in each category)
Skin - Dark 434 Obesity 367 Cancer - Other 55

Blacks may not need as much Vitamin D (for their bones)Cancer patients need more vitamin D, even those who are supplementing – obser...Hypothesis: Blacks get more cancer than whites due to lower levels of vitamin...Increased health problems in blacks is similar to that of low vitamin D white...Race changes the risk of various health problems, but many questions remain –...Stroke outcome 6.9 X worse if black and overweight (all three related via low...Vitamin D Council vs FDA concerning vitamin D deficiency in blacks and others...Vitamin D paradox – Blacks need Vit D for health, but not as much D for stron...