A 56-year-old black female patient with significant coronary heart disease (CHD) after several percutaneous intervention procedures for acute coronary syndromes was seen in the office for routine follow-up. She is 5 ft 5 in tall and weighs 265 pounds. She had recently gained 25 pounds after losing nearly 100 pounds following bariatric surgery. Her blood pressure, which was previously controlled with her therapy for hypertension, which included a β-blocker, an angiotensin-converting enzyme inhibitor, a calcium blocker, and a diuretic, was 160/90 mm Hg. Her fasting glucose was 168 mg/dL, with a hemoglobin A1C of 8.4% on therapy for type 2 diabetes mellitus. She was experiencing severe myalgias, which made it difficult for her to exercise, so she discontinued her atorvastatin. Her fasting lipid profile was as follows: total cholesterol, 264 mg/dL; high-density lipoprotein, 42 mg/dL; triglycerides, 220 mg/dL; and low-density lipoprotein, 178 mg/dL. Her 25-hydroxyvitamin D [25(OH)D] level was severely low at 8 ng/mL.

__There have been several nutrient fads over recent decades, including beta carotene, selenium, folic acid, and vitamins E and C, all of which failed to show benefit in multiple large, randomized, controlled trials and thus did not stand the test of time, at least in terms of major cardiovascular event reduction.1,2 Without question, vitamin D increases absorption of calcium, magnesium, and phosphorus and mobilizes calcium and phosphorus from bone. It is also clear that vitamin D deficiency adversely affects the musculoskeletal system, predisposing to rickets in children and osteomalacia and osteoporosis in adults. The potential role of vitamin D in the pathogenesis of statin-induced myopathy and myalgias is debatable, although currently it appears reasonable to use vitamin D supplementation in patients with such symptoms, especially if they also have deficient or even mildly reduced vitamin D levels.3 Indeed, musculoskeletal pain is generally the first and most common subjective complaint in individuals who are vitamin D deficient.4

The potential roles of vitamin D deficiency on risk of cancer development, especially colorectal cancer, risk of numerous cardiovascular diseases, and all-cause mortality rates are being studied.2 Clearly, vitamin D deficiency is now recognized to be highly prevalent in the United States and worldwide, affecting up to 50% of the general population, although the exact cutoff values used to define vitamin D deficiency and its severity are not firmly established (Table 1). Regardless, an extremely low level of <10 ng/mL, as in the case outlined above, represents a vitamin D deficiency that is likely to have pathological implications for both the musculoskeletal and cardiovascular systems. The major risk factors for developing vitamin D deficiency are listed in Table 2. In our patient, darkly pigmented skin, obesity, indoor lifestyle, and physical inactivity all likely played a role in her severely reduced vitamin D level.


There is increasing evidence that vitamin D plays a substantial role in determining the risk of various cardiometabolic conditions, particularly metabolic syndrome/type 2 diabetes mellitus and systemic hypertension, and epidemiological studies suggest that CHD risk may also be increased. Vitamin D may increase risk for atherosclerosis, CHD, and other cardiovascular diseases through several potential mechanisms (Figure).2 Chronic vitamin D deficiency increases the levels of parathyroid hormone and can cause secondary hyperparathyroidism, which may mediate many adverse cardiovascular effects, especially for those individuals with concomitant renal disease. Vitamin D also plays a role in regulating the renin-angiotensin-aldosterone system, and vitamin D deficiency upregulates the renin-angiotensin-aldosterone system and predisposes to hypertension, as well as hypertrophy of smooth muscle cells in the vascular tree and the left ventricle. Vitamin D also affects mechanisms related to metabolic syndrome/type 2 diabetes mellitus. A recent randomized, placebo-controlled trial showed that supplementing obese adolescents who had vitamin D deficiency with 4000 IU/d of vitamin D3 improved insulin sensitivity and the leptin/adiponectin ratio.5 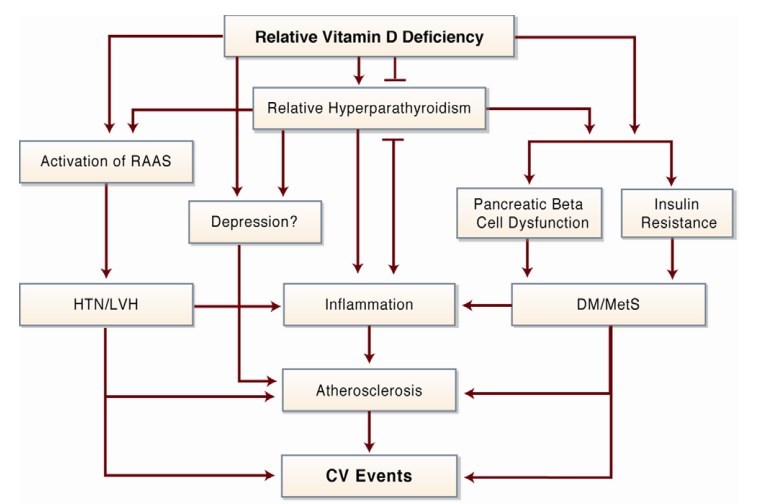 Low levels of vitamin D also may increase inflammation, both directly and via increases in parathyroid hormone. Additionally, there is evidence that vitamin D deficiency may predispose to depression,6 a known cardiovascular risk factor,7,8 and abnormalities in cognitive function. Although a causal link between vitamin D and major cardiovascular diseases and mortality has not yet been established, numerous major epidemiological studies, which we recently reviewed,2 have found highly significant correlations between low levels of vitamin D and cardiovascular disease, CHD, and mortality.

The Whitehall study10 performed a 13-year follow-up of 5409 mostly older men (mean age, 77 years), showing that higher concentrations of 25(OH)D were inversely and linearly correlated with both vascular and nonvascular mortality. After statistical adjustment, doubling of 25(OH)D concentrations was associated with 20% and 23% reductions in vascular and nonvascular mortality, respectively. They also performed a meta-analysis of 12 prospective studies with 4632 vascular deaths and 18 prospective studies with 11 734 deaths from all causes, demonstrating that those in the top quartile of 25(OH)D compared with the bottom quartile had 21% and 28% lower vascular and total mortality, respectively. Although the Copenhagen City Heart Study,9 the Whitehall study,10 and accompanying meta-analyses from both studies support the importance of 25(OH)D in cardiovascular diseases and vascular and nonvascular mortality,2,9,10 a large-scale, randomized, controlled trial is underway.11

At present, vitamin D supplementation appears to be indicated for a sizable proportion of the general population. Although the Institute of Medicine suggests that North Americans need on average 600 IU of vitamin D daily and those >70 years of age may require as much as 800 IU/d,12 considering that the average US adult consumes only 230 IU daily, has minimal sun exposure, and uses sunscreens heavily when in the sun to prevent skin damage and skin cancers,13 many experts have suggested that higher doses (in the range of 800–2000 IU daily) may be needed. These higher doses are difficult to obtain without routine supplementation, especially in areas with extreme winter climates and in higher altitudes.2

Case Resolution
After receiving 50 000 IU oral vitamin D2 twice weekly for 10 weeks, followed by 50 000 IU twice monthly, our patient had resolution of her myalgias, which allowed her to resume a more physically active lifestyle. She was also able to restart her atorvastatin (40 mg/d initially and then 80 mg/d), which she tolerated. She subsequently noted marked improvements in her CHD risk factor profile.
Disclosures
Dr DiNicolantonio is employed by a company that sells Vitamin D products, but he does not share in any profits from these sales.
Dr O’Keefe has a major ownership interest in CardioTabs, a nutraceutical company that sells nutritional supplements, including some that contain vitamin D.

Vitamin D is not a cardiovascular fad like Vitamins C, E, Folic Acid, selenium, beta-caroteen, etc. – Circulation Nov 2013         Printer Friendly PDF this page! Follow this page for updates
This page is in the following categories (# of items in each category)
Cardiovascular 460 Top news 885

92 percent had low vitamin D before heart surgery– Oct 2014Best of VitaminDWikiCardiovascular death: 9 percent due to hypertension or air pollution, 7 perce...Lower risk of Heart Disease associated with higher levels of vitamin D – June...Overview Cardiovascular and vitamin DVitamin D for the Prevention of Cardiovascular Disease: Are we ready for that...VitaminDWiki old Newsletters