Hypothesis: Drug addiction in humans can be prevented and treated by vitamin D -May 2014 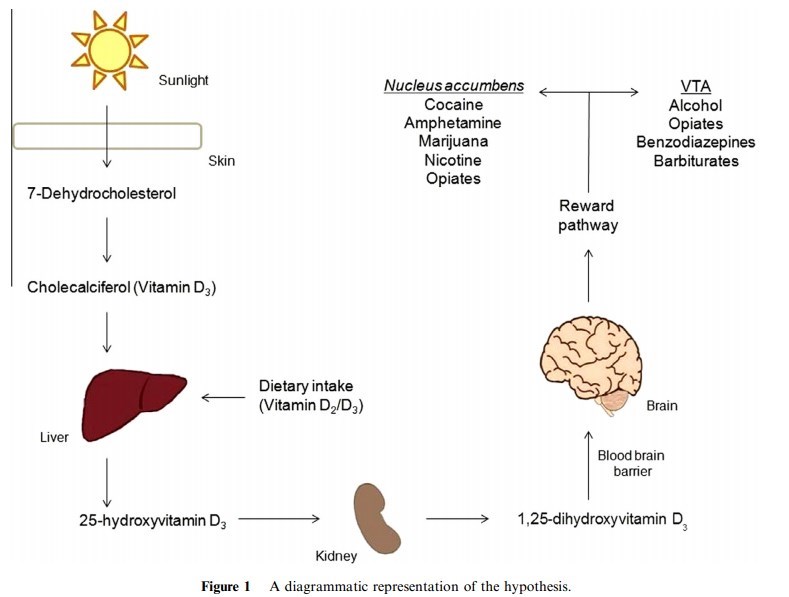 Effective pharmacological treatments for drug abuse and addiction have not yet been identified. Evidences show that vitamin D may be involved in neurodevelopment and may have a neuroprotective effect on dopaminergic pathways in the adult brain. The fact that vitamin D increases the levels of tyrosine hydroxylase expression implies that vitamin D could modulate dopa-minergic processes. Drugs of abuse act through different mechanisms of action and on different locations in the brain reward system; however, all of them share a final action in which they increase dopamine levels in the reward pathway. Vitamin D-treated animals showed significant attenuated methamphetamine-induced reductions in dopamine and metabolites when compared to control, indicating that vitamin D provides protection for the dopaminergic system against the depleting effects of methamphetamine. In this article, it is speculated that vitamin D would be an effective treatment approach for drug abuse and addiction, if we consider that vitamin D would provide protection for the dopaminergic system against dopamine-depleting effects of drugs, as it did for methamphetamine. This hypothesis can provide a new direction towards a new treatment approach for drug abuse and addiction, as we have no pharmacological treatments at our disposal at the present moment, although several issues need further investigation.

For some but not all drug users, the recreational use of drugs turns into addiction, but the reason is still unknown. It is estimated that 230 million people have used illicit drugs at least once during the year 2010 and about 27 million people have had problems due to drug abuse in the same period. Drug abuse is a serious public health problem, leading to increased rates of drug-related deaths and human immunodeficiency virus (HIV), hepatitis C and hepatitis B infection [1]. Effective pharmacological treatments for drug abuse and addiction have not yet been identified [2].
Many studies over the last decade have shown evidences that vitamin D plays an important role in brain development and function. Although vitamin D has been studied for over 50 years, the link between vitamin D and neuropsychiatric disorders has been proposed for only two decades [3].

Vitamin D is classified as a neurosteroid because of its action in the brain and like other neurosteroids vitamin D crosses the blood-brain barrier [4,5]. The vitamin D receptor (VDR) and the enzymes required for the synthesis of 1,25-dihydroxyvitamin D3 (1,25(OH)2D3), the active form of vitamin D, are present in the brain of several species [4], especially in the developing rat and mouse brain, indicating that vitamin D may be involved in neurodevelopment [5]. VDR was found in the 'nucleus accumbens', thalamus, temporal, orbital and cingulate cortices, amygdala, pyramidal neurons of the hippocampus and the olfactory system of neonatal and adult rats [3]. The sites of expression of the VDR change during development, leading to the hypothesis that vitamin D may play a role in brain development [6].

Vitamin D and the dopaminergic system

Evidences show that vitamin D may have a neuroprotective effect on dopaminergic pathways in the adult brain. When 6-hydroxydopamine (6-OHDA), which is a selective dopami-nergic toxin, is administered in animals pretreated with 1,25(OH)2D3 for 1 week, the dopaminergic function stays preserved [3]. Rats postnatally treated with a single dose of vitamin D showed increased dopamine (DA) in the brainstem and alterations in the caudate putamen and hypothalamus [7]. In vitro, 1,25(OH)2D3 increases the expression of tyrosine hydroxylase in adrenal medullary cells [4]. The evidence that vitamin D increases the levels of tyrosine hydroxylase expression implies that vitamin D could modulate dopaminergic processes [8-10].

Vitamin D administration provides protection against the DA- and serotonin-depleting effects of methamphetamine in the brain of animals when neurotoxic doses of the drug are repeatedly administered [14]. One study investigating DVD deficiency in adult rats showed that female DVD-deficient rats travelled significantly further than control rats in a locomotion test after an acute dose of amphetamine [11].
A single-point binding study made by the same group showed that DVD-deficient female rats had increased dopamine transporter (DAT) binding in the caudate putamen and nucleus accumbens compared to controls, indicating that the increased amphetamine-induced locomotion in female DVD-deficient rats is caused by the increased striatal DAT density and/or nucleus accumbens affinity [11]. The study demonstrates that DA release after amphetamine treatment could be facilitated by increased DAT density or affinity, which would lead to the enhanced locomotor response observed [11]. However, it is unknown if DA release is increased in the brains of these animals in response to amphetamine [11].

The determinant of vitamin D status is the serum concentration of 25-hydroxyvitamin D (25(OH)D). Investigators agree that optimal serum 25(OH)D should be approximately 50nmoll-1. Many studies point to a toxicity threshold for vitamin D of 10,000-40,000 IU day-1 and serum 25(OH)D levels of 500-600 nmol l-1 [15].
Adverse effects observed in vitamin D administration include weakness, anorexia, polyuria, heart arrhythmia, metal taste in the mouth, diarrhoea and excessively high levels of calcium in the blood, which might lead to damage to the heart, blood vessels and kidneys, due to vascular and tissue calcification [15].
Symptoms of toxicity are unlikely at doses below 10,000 IU day-1, although some studies suggest that lower doses might have adverse health effects over time, recommending that 25(OH)D serum levels above 125-150 nmol l-1 should be avoided [15].

It could be speculated that vitamin D would be an effective treatment approach for drug abuse and addiction, if we accept that vitamin D would provide protection for the dopaminergic system against DA-depleting effects of drugs (Fig. 1), as it was shown for methamphetamine [14].

Evaluation of the hypothesis

First, studies using animals should be designed to evaluate this hypothesis. A possible way to confirm this hypothesis is to evaluate the effect of vitamin D on the acquisition of drug-conditioned place preference (CPP) in mice or rats. Conditioned stimuli induce uncontrollable craving for the drug, leading to relapse in abstinent patients [16]. The CPP model is based on this mechanism and has been widely used in the investigation of new pharmacological treatments for drug dependence [17].The CPP apparatus provides two compartments with the same dimensions that differ with regard to the wall pattern and the texture of the floor. Therefore, there are visual and tactile differences between them. The administration of the drug must be randomly paired with any one compartment (unbiased method) [18].
The conditioning regime should be 8 days long, and vitamin D should be given immediately at the end of each conditioning session. The duration of the vitamin D treatment was based on studies in which 8 days of vitamin D administration (1.0 lg/kg/ day) has been shown to up-regulate GDNF expression and protein levels in the brain [9,19,20]. The test for CPP should be carried out 24 h after the last session, during which animals have free access to both compartments and the time they spend in each compartment is measured.
To confirm this hypothesis, the results must show that animals treated with vitamin D spend significantly less time in the drug-paired compartment than the ones treated with placebo. Therefore, this finding would represent a reduction in the consolidation of drug-induced CPP. Another possible way is to evaluate the effect of vitamin D on a drug self-administration study in which animals are treated with vitamin D after acquisition of drug self-administration. To confirm this hypothesis, vitamin D treatment must decrease maintenance levels of drug self-administration. If studies using animals show encouraging results, appropriate clinical trials should be designed in order to evaluate this hypothesis. A possible way to evaluate the effect of vitamin D in drug abuse and addiction in humans is to conduct a placebo-controlled, double blind, randomised study where drug-dependent patients are placed in two groups: 'Vitamin D' and 'Placebo'. The doses chosen for the study must be below the toxicity threshold for vitamin D. Patients in the vitamin D group should demonstrate reduction in drug use when compared to controls, providing support for the utility of vitamin D in the treatment of drug abuse and addiction.

Figure 1 A diagrammatic representation of the hypothesis.
Vitamin D-treated animals showed significant attenuated methamphetamine-induced reductions in DA and metabolites when compared to controls, indicating that vitamin D provides protection for the dopaminergic system against the depleting effects of methamphetamine [14].
Drugs of abuse increase DA action by increasing DA release, inhibiting DA re-uptake or increasing post-synaptic sensitivity to DA. These drugs act through different mechanisms and on different locations in the brain reward system. It has been shown that cocaine, amphetamine, marijuana, nicotine and opiates stimulate neurons in 'nucleus accumbens', while alcohol, opiates, benzodiazepines and barbiturates stimulate neurons in the VTA; nevertheless, all of them share a final action in which they increase DA levels in the reward pathway [21].
The protective effects of vitamin D might be due to a mechanism of up-regulation of GDNF [14], as it was shown that when GDNF is administered directly into the striatum before methamphetamine treatment, complete protection against the dopaminergic toxicity of methamphetamine, such as reductions in striatal DA release and content, could be observed [22]. Vitamin D also increases glutathione levels and inhibits inducible nitric oxide synthase (iNOS) production, which could reduce methamphetamine toxicity to the DA system by reducing methamphetamine free radicals' production [14].

The evidences from literature concerning vitamin D and the central nervous system support the plausibility of this hypothesis, which can provide a new direction towards an effective treatment approach for drug abuse and addiction. If vitamin D treatment proves effective, many patients would benefit from it, as vitamin D is an accessible, safe and inexpensive treatment. In conclusion, advances in drug-abuse research may contribute towards new choices in drug-abuse treatment, as we have no pharmacological treatments at our disposal at the present moment, although several issues need further investigation.

Hypothesis: Drug addiction in humans can be prevented and treated by vitamin D -May 2014         Printer Friendly PDF this page! Follow this page for updates