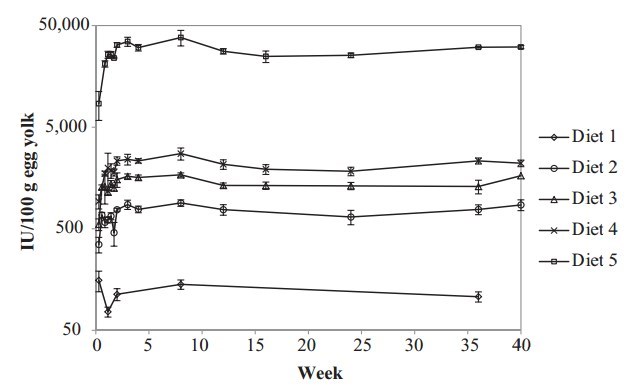 Egg production and hen mortality were monitored daily. Feed intake was determined weekly. Eggs were collected at predetermined points throughout the 40-wk period (19 to 58 wk of bird age) for assessment of

There were no consistent differences among the dietary treatments over the experimental period. Hens supplemented with up to 102,200 IU of D3/kg of diet resulted in no significant reductions in egg production, feed intake, feed efficiency, egg component weights, yolk color, Haugh units, and specific gravity in comparison with the control-fed hens (P > 0.05). These data suggest the addition of cholecalciferol to the diet of the laying hen at concentrations up to 102,200 IU of D3/kg of diet had no consistent negative effects on laying hen performance or egg quality. 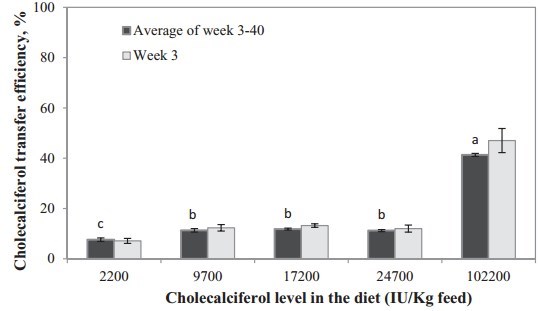 Note: This is the best demonstration of adding feed to chickens to increase the vitamin D in eggs that we have seen so far.
Unfortunately virtually all governments have, so far, been against commerical fortification of food at any worthwile amounts.
They have even been opposed to shining UV lights on the chickens so as to increase the vitamin D content in eggs somewhat back to what it had been before chickens were moved indoors

Feed chicken lots of vitamin D, get 6000 IU per egg with no change in production – Nov 2013         Printer Friendly PDF this page! Follow this page for updates
This page is in the following categories (# of items in each category)
Veterinary and Vitamin D 134 Fortification with Vitamin D 111

2 Australian eggs might provide all of your daily Vitamin D needs – May 2019200 IU per 100 gram of egg yoke when add vitamin D to poultry feed in Europe ...3 proven ways to increase Vitamin D in eggs – Aug 2020Chicken meat with lots of Omega-3 – available, US patent applied for – Aug 2019Egg vitamin D levels are not permitted to be restored to levels before chicke...Free-range chicken eggs have at least 3X more vitamin D – Oct 2013Hens with Vitamin D were better in at least 5 ways – RCT Aug 2018Omega-3 from biofortified eggs is practical (and great for health) – Nov 2015Vitamin D content of pork increased 3X with about 10 hours of noonday sun – N...Vitamin D fortification of cattle would provide you only 80 IU – Aug 2018Vitamin D fortification of food - review Dec 2011Vitamin D produced in pig skin by 296 nmeter UV-LEDs – May 2016