There is a high prevalence of vitamin D insufficiency and deficiency worldwide likely because of both limited sun-exposure and inadequate dietary intake. Meat, including pork, is not typically considered a dietary source of vitamin D, possibly because of management practices that raise pigs in confinement. This experiment determined the vitamin D content of loin and subcutaneous adipose tissue in sun-exposed finisher pigs. Two separate groups of pigs were used. The first group (28 white Landrace-Duroc) was assigned at random to either sunlight exposure (SUN) in spring and summer or confinement per standard practice (Control). The second (24 Yorkshire-Duroc-Landrace) underwent the same exposure protocol but was exposed in summer and fall or assigned to control (Control). A subsample of five SUN and four Control pigs, matched for weight and body condition score, was selected for slaughter from each group. Pigs (n = 10 SUN, n = 8 Control) had blood drawn for analysis of 25(OH)D3 concentration before/after sun exposure or control, and tissue samples were taken at slaughter for analysis of tissue vitamin D3 and 25(OH)D3 concentration. Three random samples from a single loin chop and surrounding adipose were collected and analyzed. Serum concentrations of 25(OH)D3 did not differ (P≥0.376) between treatments prior to sun exposure in either group, but was increased (time*treatment interaction, P<0.001) with SUN exposure. Total vitamin D content (D3 plus 25(OH)D3) of loin tissue was increased (P < 0.001) with sun exposure and averaged 0.997±0.094 μg/100g and 0.348±0.027 μg/100g for sun and control pigs, respectively. While exposure to sunlight increased (P = 0.003) tissue content of 25(OH) D in subcutaneous adipose tissue, vitamin D3 content was similar between treatments (P = 0.56). Sunlight exposure in pigs increased the vitamin D content of loin, and may provide an additional source of dietary vitamin D. 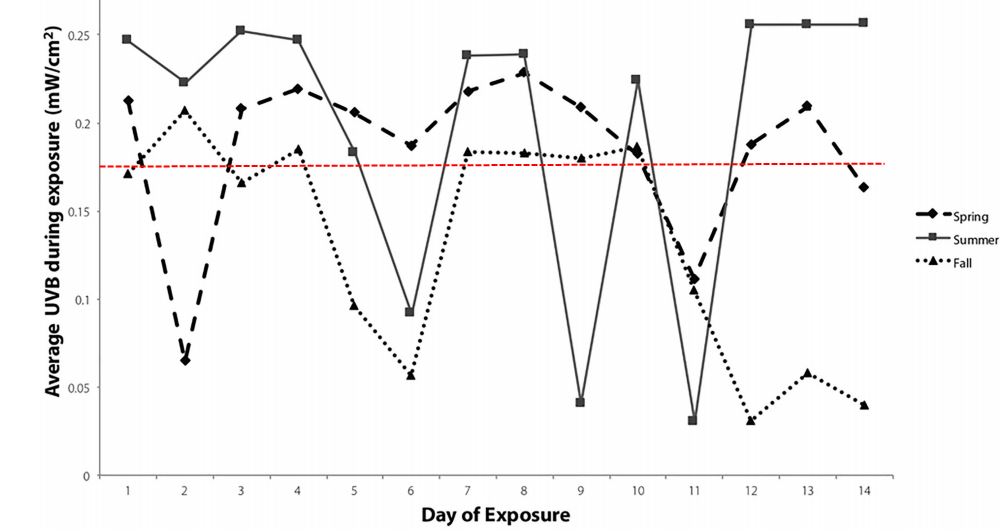 These pigs were raised in Wyoming ( latitude: 40 degrees)
Can expect far more vitamin D if the same experiment were to be made in Florida ( latitude: 25 degrees)
Note: A few years ago you could buy pasture-raised lard from Florida pigs

Vitamin D content of pork increased 3X with about 10 hours of noonday sun – Nov 2017         Printer Friendly PDF this page! Follow this page for updates
This page is in the following categories (# of items in each category)
Food sources for Vitamin D 109