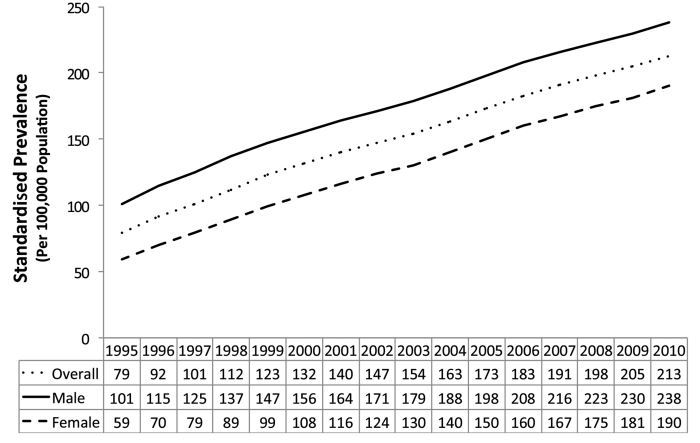 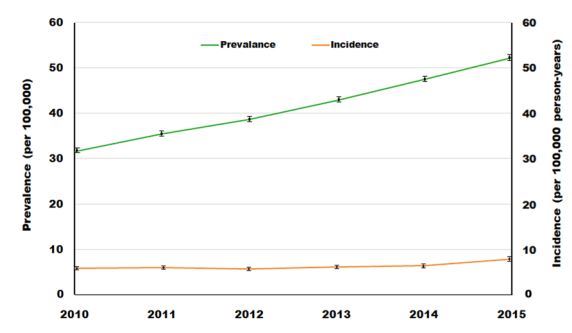 AS prevalence study in Ontario, Canada - 2014

Objective With the introduction of MRI in diagnosis and tumour necrosis factor inhibitors for treatment, the field of ankylosing spondylitis (AS) has undergone significant changes. We carried out a population-based study of the trends in incidence and prevalence of AS over the past 15 years.

Methods This is a retrospective analysis of provincial health administrative databases. Residents of Ontario, Canada aged 15 years or older diagnosed with AS between 1995 and 2010 were included in the study. Crude as well as age-standardised and sex-standardised incidence and prevalence of AS between 1995 and 2010 were calculated. Trends in prevalence and incidence of male and female patients with AS were separately analysed.

Conclusions The prevalence of AS in Ontario has nearly tripled over the past two decades. The proportion of women with new diagnosis of AS is increasing, a trend that began around the year 2003. A higher proportion of male compared with female patients with AS are diagnosed at an earlier age.
&nbspDownload the PDF from VitaminDWiki

The aim of this study is to determine the prevalence and incidence of ankylosing spondylitis (AS) in South Korea, 2010–2015. This study was conducted using the Health Insurance Review Agency (HIRA) database, which includes information on every patient diagnosed with AS. The incidence and prevalence of AS were evaluated by age, sex, and income status. The prevalence increased linearly by 7.7% annually, i.e., 31.62 in 2010 to 52.30 in 2015 (per 100,000 persons). During the study period, the incidence was 6.34 per 100,000 person-years. The prevalence peaked for both men and women in the age range 30–39 years. Incidence peaked for men in the age range 20–29 years, but peaked for women between ages 70 and 89. AS was 3.6 times more prevalent in men than in women, and the incidence in men was 2.1 times greater than in women. With respect to income status, the prevalence and incidence of AS were 3 times greater and 5 times greater, respectively, in medical aid recipients compared to individuals with other income levels. The trend of increasing AS prevalence and the observation that 14.3% of all patients newly diagnosed with AS are medical aid recipients have significant implications for healthcare planning.

Ankylosing spondylitis prevalence increased 1.5 X in a decade (probably Vitamin D) 2017         Printer Friendly PDF this page! Follow this page for updates
This page is in the following categories (# of items in each category)
Bone - Health 272