A surf of the web indicates that:

Measurements: DSI, WC, height, and weight were measured at outset and at the conclusion of each interval: baseline, FU1, FU2, and FU3.

Conclusion: In a striking dose-response relationship, increasing DSI was associated with escalating abdominal obesity, a potential pathway for cardiometabolic risk in this aging population. 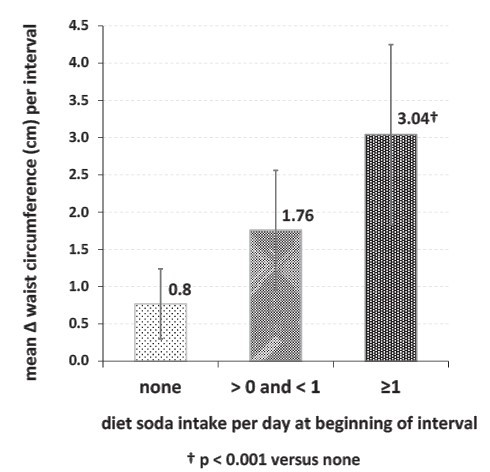 &nbspDownload the PDF from VitaminDWiki
Described in Diet Soda Adds Inches to the Waist of Seniors, Researchers Say Mercola April 2015

Pop-cola acids and tooth erosion: an in vitro, in vivo, electron-microscopic, and clinical report. - 2010

Introduction. Manufactured Colas are consumed universally as soft drinks. Evidence about the acid contents of Cola-beverages and its effects on teeth is rare. Aim. To assess (i) cola acidity and buffering capacity in vitro, (ii) tooth erosion after swishing with colas in vivo (iii) scanning electron microscopic effects on teeth of colas, and tooth-brush abrasion, and (iv) report a clinical case of erosion from cola consumption.

Materials and Methods. (i) We measured six commercially available pop "Cola beverages", pH, and buffering capacities using a pH-Mettler Automatic Titrator, with weak solution of Sodium Hydroxide (ii) two cohorts, one with teeth, the second without teeth rinsed with aliquots of Cola for 60 seconds. Swished cola samples tested for calcium and phosphorus contents using standardized chemical analytical methods (iii) enamel, dentine, and the enamel-cemental junction from unerupted extracted wisdom teeth were examined with a scanning electron microscope after exposure to colas, and tested for tooth-brush abrasion; (iv) a clinical case of pop cola erosion presentation, are all described.

Soft drinks cause soft bones, but is it also time to slay the sacred cow?- 2006

http://www.drbriffa.com/2006/10/09/soft-drinks-cause-soft-bones-and-is-it-time-to-slay-the-sacred-cow/
October 2006
Clipped – – – This month’s edition of the American Journal of Clinical Nutrition has published a study which found that women drinking four or more cola drinks a week were at increased risk of reduced bone density (1). And this is not the first evidence that has linked the drinking of fizzy drinks to weaker bones. A number of explanations are generally put forward to attempt to explain this phenomenon. A constituent of cola is phosphoric acid, which is believed to impart a degree of acidity within the body that increases the risk that calcium is leeched from the bone. Caffeine, another common component in cola drinks, is also believed to stimulate calcium loss.

WebMD: Soda and Osteoporosis: Is There a Connection? – Feb 2007

http://www.webmd.com/osteoporosis/features/soda-osteoporosis
Clip – – – –
“New research indicates that there may be more to the soda and osteoporosis connection than simply replacing the good stuff with the useless stuff.
Researchers at Tufts University, studying several thousand men and women, found that women who regularly drank cola-based sodas — three or more a day — had almost 4% lower bone mineral density in the hip, even though researchers controlled for calcium and vitamin D intake. But women who drank non-cola soft drinks, like Sprite or Mountain Dew, didn't appear to have lower bone density.”

Clip from Wikipedia entry on Osteoporosis

Soft drinks—some studies indicate that soft drinks (many of which contain phosphoric acid) may increase risk of osteoporosis; 21 Others suggest soft drinks may displace calcium-containing drinks from the diet rather than directly causing osteoporosis. 22

Cola at Advancing your health March 2012

63% of Americans Actively Avoid Soda Mercola
41% in 2002; Long article about insulin, etc. Nothing about Calcium and Vitamin D

GreenMedInfo July 2016
1. Soda can cause a decline in kidney function.
2. Soda increases diabetes risk.
8. Caffeine in soda blocks the absorption of magnesium.
9. Soda increases obesity risk in children.
10. Soda increases heart disease in men
14. Soda depletes your mineral levels.
22. Soda is linked to Asthma.
VitaminDWiki suspects that decreased Vitamin D is the connection for many of the above

Carmel coloring can cause Cancer

Cola Soft Drinks reduce Calcium and vitamin D         (Cached) Printer Friendly PDF this page! Follow this page for updates
This page is in the following categories (# of items in each category)