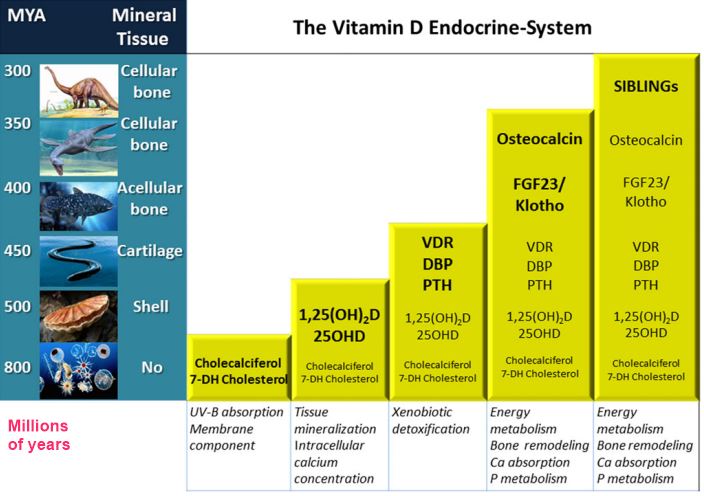 Vitamin D should be regarded as a very conserved molecule that probably started as a component of the plasma membrane of simple organisms, with protective or defensive roles. Its function has changed to become a necessary regulatory element of the metabolic and energetic requirements of life on Earth. The dynamism of the molecule and its receptor certainly represents an element of the plasticity that allowed the acquisition of such highly specialized properties within the musculoskeletal system. It is impressive that during evolution the appearance of cellular bone increases the complexity of the system, with the production of bone proteins that counter-regulate the effects of vitamin D on bone and muscles. Significantly, the VDR, possibly because of its ancestral biological roles, is present in numerous tissues not necessarily involved with the musculoskeletal system. Among the claimed pleiotropic properties, the systemic but generic anti-inflammatory effects could be related to the RAS-inhibitory properties. Given this complex biology, it seems rather simplistic to try to deduce its function through the assay of one or two blood circulating metabolites. A dynamic view of the interaction with its receptor is certainly helpful to try to understand why we cannot exactly predict the biological effects of the natural compounds. In fact, the recommended doses of this ‘vitamin’ either for healthy people or for patients are still a matter of debate. A dynamic view also helps to understand why synthetic analogues can have very specific biologic effects and can be considered for very different clinical purposes (from cancer to infection) through activation of the same receptor. Vitamin D and its receptor should be regarded as a rather sophisticated molecular machine that we are still discovering. Much more remains to be discovered, but a general overview that takes into account the evolutionary aspects of this system seems useful to try to understand the multifaceted biology of this ‘vital amine’.

Companion animals (dog, cats) need vitamin D too – March 2016History of Vitamin D from 500 million years ago to orthopaedic practice today...Off topic: Earthing to improve health (bare skin grounded to the earth)Paleopathology – Vitamin D and bones, teeth during the past 2,000 years – mee...Sunshine is a cure for “weak and soft muscles” – 425 BCThe Healing Sun –1999 book highlights at VitaminDWikiVitamin D history back to Egyptians and fortification - Aug 2011Vitamin D is the most popular supplement, and was in the first commercial sup...Vitamin D receptor is essential for both normal and cancerous cells in the la...Vitamin D: part I - from plankton and calcified skeletons (500 million years ...