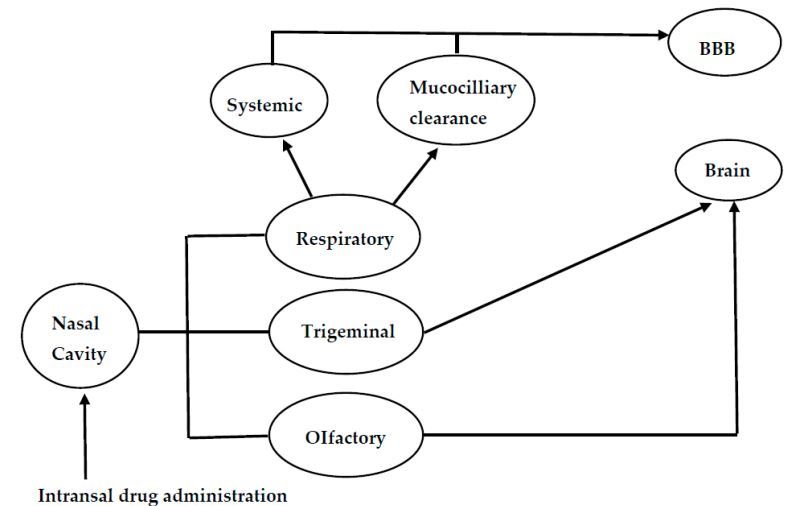 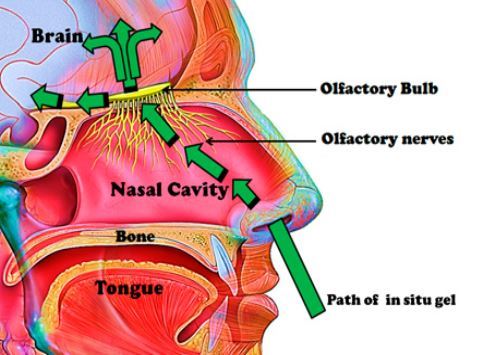 In situ-based gel drug delivery systems that can bypass the blood-brain barrier, deliver the therapeutics to the desired site, reduce peripheral toxicity and control drug release kinetics have been developed. Some of the therapeutics used to treat neurological diseases suffer from poor bioavailability. Preclinical reports from several researchers have proven that the delivery of drugs to the brain via the nose-to-brain route using in situ gels holds great promise. However, safety issues on the toxicity of the nasal mucosa, transportation of the drugs to specific brain regions and determination of the required dose are factors that must be considered when designing these gels. This review will be focused on in situ-based gels that are used for the delivery of therapeutics via the nose-to-brain route, preclinical reports and challenges.
&nbspDownload the PDF from VitaminDWiki

Design and Efficacy of Nanogels Formulations for Intranasal Administration - May 2018 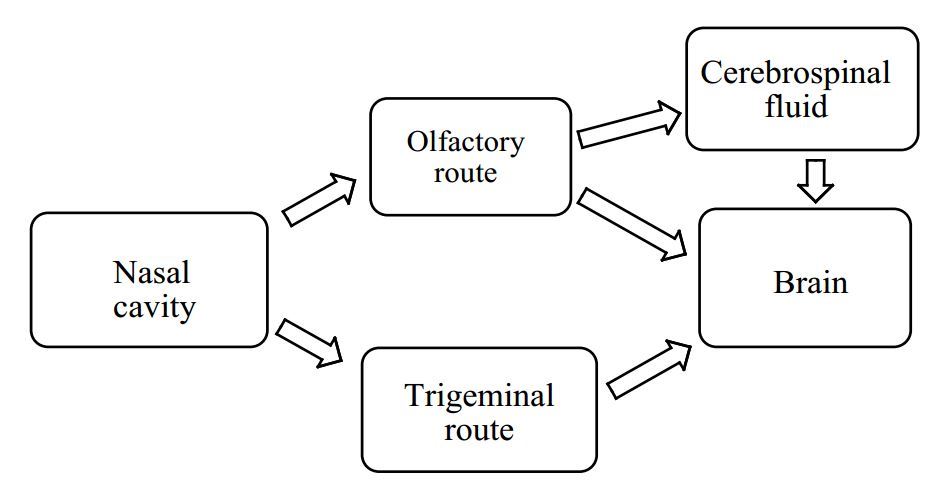 Portion of table of possible drugs 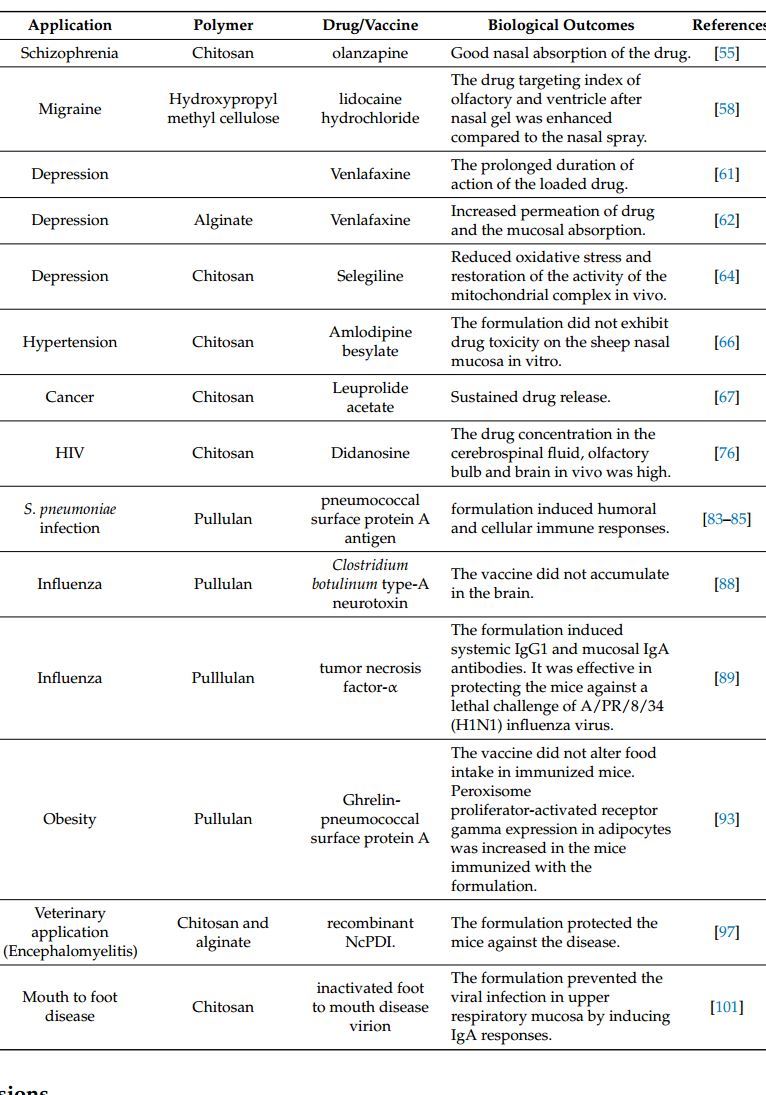 Conclusions
Intranasal administration of therapeutics using nanogels can bypass BBB resulting in good drug uptake in the brain with excellent neuroprotective effect. Nanogels have been reported to be useful in the enhanced delivery of insulin to the brain resulting in a significant amount of the insulin in the anterior and cerebellar regions of the mouse brain. The result revealed that nanogel is a potential carrier for the treatment of mild to moderate Alzheimer disease resulting in improved cognitive performances and brain function. Nanogels are also useful for administration of antipsychotic drugs with poor bioavailability via intranasal route for the treatment of schizophrenia. The nature of the polymer used to prepare the gel influenced the drug dissolution rate in release medium, its ability to adhere to mucosal tissues and its capacity to transiently open the tight junctions influenced the drug absorption of the drug from the nanoparticles on administration of the formulation intranasally. Nanogels are also potential carrier for the delivery of therapeutics with rapid nasal mucociliary clearance. Incorporation of anti-migraine drug, lidocaine hydrochloride that is characterized by rapid nasal mucociliary clearance resulted in an improved bioavailability of drug in vivo.
Nanogels have also been employed for the delivery of anti-depression drug resulting in a high brain/blood ratio of the drug after administration of the formulation intranasally. The olfactory and trigeminal nerve systems are involved in the nose to brain transportation of drugs to the olfactory bulb or trigeminal region in which the drug enter into other brain regions by diffusion thereby bypassing systematic circulation. Nanogels are effective as targeted carriers that protect vaccine antigens from degradation in vivo and also act as a vaccine delivery. The advantages of nanogels as vaccine delivery systems are their good loading capacity, stability and non-toxicity. The vaccine formulations of nanogels induced antibody responses which are useful for protection against viral, bacterial and lifestyle diseases. The formulation induced humoral and cellular immune response. The formulations were not transported to the brain revealing the safety of nanogels. Despite the great potentials of nanogels in drug delivery and in vaccine formulations, most of the reports are preclinical studies indicating that there is a need for these formulations to reach clinical studies. Major advances in the development of nanogel-based vaccines and drug delivery systems can be expected in the near future. However, a detailed evaluation of the current vaccines and a good understanding of disease pathology and biomaterials will provide targeted and effective delivery systems for preventive and therapeutic applications.
&nbspDownload the PDF from VitaminDWiki

From nose to brain: understanding transport capacity and transport rate of drugs – Sept 2008

The unique relationship between nasal cavity and cranial cavity tissues in anatomy and physiology makes intranasal delivery to the brain feasible. An intranasal delivery provides some drugs with short channels to bypass the blood–brain barrier (BBB), especially for those with fairly low brain concentrations after a routine delivery, thus greatly enhancing the therapeutic effect on brain diseases. In the past two decades, a good number of encouraging outcomes have been reported in the treatment of diseases of the brain or central nervous system (CNS) through nasal administration.
In spite of the significant merit of bypassing the BBB, direct nose-to-brain delivery still bears the problems of low efficiency and volume for capacity due to the limited volume of the nasal cavity, the small area ratio of olfactory mucosa to nasal mucosa and the limitations of low dose and short retention time of drug absorption. It is crucial that selective distribution and retention time of drugs or preparations on olfactory mucosa should be enhanced so as to increase the direct delivery efficiency.
In this article, we first briefly review the nose-to-brain transport pathways, before detailing the impacts on them, followed by a comprehensive summary of effective methods, including formulation modification, agglutinant-mediated transport and a brain-homing, peptide-mediated delivery based on phage display screening technique, with a view to providing a theoretic reference for elevating the therapeutic effects on brain diseases.

Image of Olfactory Bulb from the web

Perhaps drugs such as inhaled vitamin D can get directly to the brain – March 2018         Printer Friendly PDF this page! Follow this page for updates
This page is in the following categories (# of items in each category)
Forms of Vitamin D 98