10 Pharmaceutical companies combined made more than the other 490 companies
$35.9 billion vs $35.7 billion
Apparently first mentioned in the book The 100 year Lie

Doctors are still given extremly little nutrition& supplement instruction
60% of med schools suveyed said in 2006 that they teach less than 25 hours of Nutrition and Life-Style
Note: in 1985 25 hours was the recommended minimum - 60% not even achieving the minimum!
Ref: Adams, Kelly et al. 2006. Status of nutrition education in medical schools. American Society for Clinical Nutrition.

"Extremely Big Pharma" was not found by Google Search - this appears to be the first use of the phrase.

The goal of the Big Pharma is to indefinitely "manage" disease
curing a disease would destroy the market (Talk about a perverse incentive structure).

The prime directive of any individual or institution is self-preservation

Big Pharma has made it illegal to claim that a supplement can treat a disease FDA Website
". . a product sold as a dietary supplement and promoted on its label or in labeling* as a treatment, prevention or cure for a specific disease or condition would be considered an unapproved- - and thus illegal - drug" 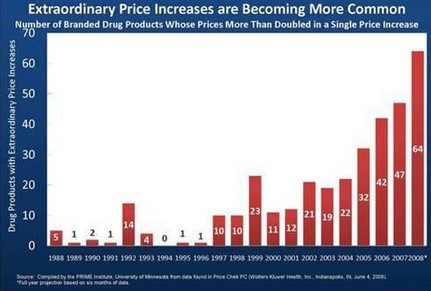 Deaths due to Big Pharma exceed that from illegal drugs


Observation by VitaminDWiki
US laws changed recently - Each drug company no longer has any competition and no longer has to justify their prices.
The US law states, for example, that Medicare is not allowed to look for a lower price for a drug inside nor outside of the US.
Doubt that the international price of durgs went up by even 20% during that same time period.

Automotive, McDonalds, Banks got far bigger return on lobbying investment than did BigPharma

Extremely Big Pharma         Printer Friendly PDF this page! Follow this page for updates
This page is in the following categories (# of items in each category)
Off Topic 135 Top news 889