Vitamin D Deficiency is Associated with Increased Use of Antimicrobials among Preschool Girls in Ethiopia. 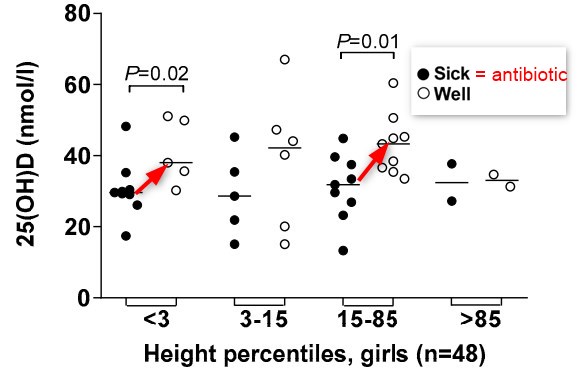 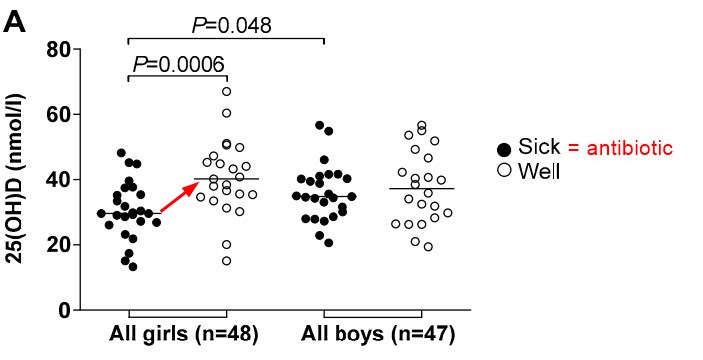 Preschool children in Addis Ababa, Ethiopia, are highly exposed to influenza viruses. Factors related to infections, nutrition, and environmental conditions that might explain the burden of influenza among these children were investigated. Ninety-five preschool children, 48 girls and 47 boys, were followed clinically for 12 months. Illness and immune responses to influenza; three other respiratory viruses; five airway pathogenic bacteria; and levels of vitamins D, A, and B12 were assessed. Most of the children had antibodies to numerous respiratory viral and bacterial agents at study start, and many were infected during follow-up. Twenty-five girls and 25 boys fell ill during the study, and were treated with one or more courses of systemic antimicrobials. Ninety percent of both girls and boys had 25-hydroxyvitamin D [25(OH)D] levels below the recommended levels. While there was no overall difference in the levels of vitamins D, A, and B12 between girls and boys, treated girls had significantly lower 25(OH)D levels than non-treated girls and treated boys. There was a considerable number of short for age children, but only the short treated girls had significantly lower 25(OH)D levels than the non-treated children. Preschool girls with low 25(OH)D levels were more vulnerable to pathogenic microbes than boys.

Antibiotics in children associated with low Vitamin D and short height (Ethiopia) – March 2019         Printer Friendly PDF this page! Follow this page for updates
This page is in the following categories (# of items in each category)
Antibiotics, probiotics 92