Vitamin D Deficiency at Birth Among Military Dependants in Hawai'i

Vitamin D has long been known to be essential in bone mineralization as well as calcium and phosphate regulation. An increasing body ofliterature suggests that Vitamin D is also key in many other areas to include immune function, brain development, prevention of autoimmune disease, and prevention of certain types of cancers. Studies also suggest that, with decreased sun exposure due to concern for skin cancer risk, much of the world's population is becoming increasingly deficient in vitamin D. Our hypothesis was that vitamin D deficiency exists, and can be detected, even in sunny climates such as the state ofHawaii. To test this hypothesis, eighty-six cord blood samples were collected in the process of routine clinical testing. These samples were tested for 25-hydroxy vitamin D via liquid chromatography mass spectroscopy. Percent deficiency (<20ng/mL) and insufficiency (20-31.9ng/mL) were determined by statistical analysis. Forty-six percent (n=37) of cord blood samples tested were deficient in vitamin D; 47 percent (n=38) of samples had insufficient 25-OH vitamin D. Only 7 percent (n=6) of samples showed vitamin D concentrations at the recommended levels. 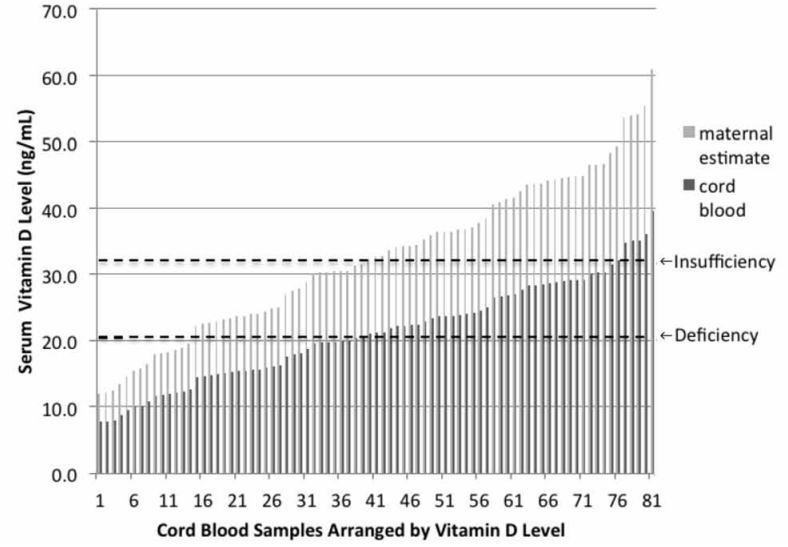 Vitamin D is a fat soluble molecule which has been shown to play a key role in several physiologic processes both in animal models and in clinical research. Over the last three to four decades, the medical community has increasingly stressed the importance of avoiding ultraviolet B (UVB) radiation due to concerns for metastatic melanoma and other skin cancers. Recent studies and reviews continue to report the risks of sun exposure especially for pediatric and adolescent populations.1 Alternately, sun exposure (and subsequent increases in Vitamin D) is increasingly tied to health benefits beyond the long known utility in prevention of rickets. In one study, those who had skin cancers presumably related to extensive sun exposure had significantly lower risks of cervical, esophageal, gastric, and rectal cancer than the general population.2 Evidence also indicates that, in addition to modulation of risks of above cancers, multiple sclerosis, insulin dependent diabetes mellitus, autism and schizophrenia are increased in populations with lower sun exposure (and lower Vitamin D levels), particularly during late prenatal and perinatal periods leading some researchers to hypothesize that hypovitaminosis D induces risk-modifying imprinting early in life.3 Respiratory syncytial virus (RSV) infection, a major source of hospitalization and mortality in infants, occurs more frequently in patients with deficient 25-OH vitamin D cord blood levels at birth. Lower respiratory tract infection with RSV was 6 times more likely in infants with cord blood levels <20ng/mL.4 Language delay has been noted to be more prevalent in children born to mothers with 25-OH vitamin D levels <18.5ng/mL compared to those >28ng/mL.5 The American Academy of Pediatrics (AAP) in 2008 increased the recommended intake of Vitamin D based on the occurrence of vitamin D deficient rickets at levels <20ng/mL. Intake at the new recommendation of 400IU consistently achieves levels >20ng/mL in children.6 Other, non-osseous, health implications such as those listed above still seem to be relevant at levels between 20 and 32 ng/mL (50 and 80nmol/L).7 An Endocrine Society guideline discusses deficiency and insufficiency ranges similar to those listed above in order to optimize potential extraosseous benefits.8 Conversely, while the Institute of Medicine does recommend 400IU to maintain levels >20ng/mL to support optimal bone health, it does not endorse the idea of an "insufficiency" range as the evidence to support higher levels of vitamin D is limited.9

The purpose of our study was to determine the incidence of vitamin D deficiency and insufficiency as defined above at birth among dependents of military personnel stationed in Hawai'i. The team hypothesized that, given emphasis on minimizing direct sun exposure in the medical community and society at large, hypovitaminosis D would be prevalent even in a climate where significant sun exposure would be expected.

The study protocol was approved by the Human Use Committee at Tripler Army Medical Center. Investigators adhered to the policies for protection of human subjects as prescribed in 45 Code of Federal Regulation 46. Cord blood samples are routinely collected for screening of infants at risk for hemolytic disease of the newborn. Samples were refrigerated at 4 degrees Celsius for 2 days to 4 weeks in Ethylenediaminetetraacetic acid (EDTA) sample tubes until sufficient numbers had been collected for this study. Aliquots from 86 of these samples (collected in February and March 2012) were placed on blotter cards and sent to an outside laboratory for liquid chromatography mass spectroscopy analysis of 25-OH vitamin D2 and 25-OH vitamin D3 levels (ZRT Laboratory, Beaverton, OR).

As part of our methods validation, we tested 10 cord blood samples within 48 hours of original collection. Aliquots of these same samples were stored in centrifuge tubes for 3 weeks at 4 degrees Celsius. At the end of three weeks they were manually homogenized (shaken) and they were again tested using the sample cards described above. The mean drop in 25-OH vitamin D over the 3 weeks was 10 percent (median 7.4 percent).

As fetal levels of 25-OH vitamin D have previously been measured to be 65-85 percent of maternal levels10, cord blood levels were divided by a factor of 0.65 for a conservative estimate of the incidence of maternal deficiency in this population. As discussed above, deficiency was defined as a level <20ng/mL (50nmol/L) and insufficiency as a level 20-32ng/mL (50-80nmol/L).

Five of the 86 cord blood samples were excluded for processing reasons (4 with clots on card, one with an otherwise unusual appearance to blood spot) resulting in a total of 81 samples available for analysis.None of the 81 samples had any significant amount of 25-OH vitamin D2. The median 25-OH vitamin D3 level was 21.1 with a mean of 21.2 (SD 7.5) and a range of 7.7-39.6. Blood levels indicating deficiency of vitamin D were detected in 46 percent (n=37) of samples. Insufficiency was found in 47 percent (n=38) with only 7 percent (n=6) indicating sufficiency. Estimates of maternal deficiency and insufficiency were 17 percent (n=14) and 31 percent (n=25) respectively (See Figure 1).

The American Academy of Pediatrics has recommended providing supplemental vitamin D to exclusively breastfed infants for decades. In 2008, the recommended amount was increased from 200IU to 400IU with an emphasis to start within the first few days of life,5 yet in a recent survey of pediatricians in Seattle, Washington less than half of pediatricians recommended supplemental vitamin D for all exclusively breastfed infants in their practices.11 Military physicians had a higher compliance with the guidelines (89% of pediatricians, 63% of family practitioners) with 65 percent of those who were non-compliant citing a belief that there was adequate sun exposure in their geographic area so that supplementation was not indicated.12 Similar barriers to supplementation exist in Hawai'i. At a recent symposium on metabolic bone disease in Hawai'i, many pediatricians in attendance admitted that they did not routinely recommend vitamin D supplementation because of the likely high amount of sun exposure among their patients.

A majority of neonates cared for in civilian neonatal intensive care units (NICU) in Hawai'i do not receive supplementation of vitamin D beyond that found in the breast milk fortifiers and in premature infant formula. The result of this practice is that few, if any, infants in the NICU receive the recommended daily 400IU of vitamin D. Our results indicate that such practices likely prolong the duration of vitamin D deficiency in these high risk infants, potentially putting them at increased risk for language delay and other morbidities discussed above.

The primary limitation of our study was the unanticipated decline in vitamin D level over time. Prior studies have shown stability of vitamin D under various conditions including storage in serum only at -25°C for up to 40 years,13 in whole blood for 3 days at room temperature, or for 10 years at -20°C,14 however, storage in whole blood for more than 3 days at 4°C has not previously been validated. Given our findings of a decline in vitamin D levels over time, storage in serum only may be preferable. Acknowledging this limitation, one could postulate up to a 10 percent underestimation of 25-OH vitamin D levels in our study, which would suggest that the true levels of deficiency and insufficiency may be somewhat lower than those reported in this study.

It is of note that February has been previously described as the peak incidence of vitamin D deficiency in cord blood.4 As this is the time frame when most of our samples were collected, it is possible that our results represent a peak incidence of vitamin D deficiency in our population. While there is potentially less seasonal variability of sun exposure and vitamin D levels in Hawai'i due to low latitude and more temperate climate, because of winter clouds and rain, it is possible that significant variability persists. In addition, as the military is a transitory population and vitamin D has a long half life in vivo due to storage in adipose tissue, it is possible that some of the seasonal effect from other geographic locations carried over into Hawaii. A future study could include this demographic data to assist in estimating the incidence of vitamin D deficiency in the non-migratory population.

Our study results are consistent with prior studies that demonstrate that deficiency can occur even in sun-rich environments at low latitudes. Dror, et al, reviewed several studies demonstrating 40-96 percent vitamin D deficiency in cord blood samples in latitudes ranging from 40 degrees south to 40 degrees north.9 Prior studies specific to Hawaii (21° N) include a study in adults with sun exposure >15 hours per week which demonstrated that nearly 10 percent of individuals were in deficient range (<20ng/mL) with an additional 40 percent in the insufficient range (20-30mg/mL).15 While the exact reason for the deficiency despite adequate sun exposure is unclear, it has been established that skin type and increased skin melanin after sun exposure affect the synthesis of previtamin D3 and serum levels of vitamin D3.16

The lack of vitamin D2 in our population is interesting. Historically, vitamin D2 (a fungal derivative also known as ergocalciferol) had been the predominant nutritional supplement. Vitamin D2 is also present in raw mushrooms. With some studies17 showing increased efficacy and potency of vitamin D3 (an animal derivative also known as cholecalciferol), supplementation has shifted to preferential use of vitamin D3 in products such as prenatal vitamins. Vitamin D3 is also the form generated when human skin is exposed to ultraviolet radiation. Our results indicate that our population does not have significant exposure to dietary vitamin D2.

Disclaimer The views expressed in this manuscript are those of the authors and do not reflect the official policy or position of the Department of the Army, Department of Defense, or the US Government.