Items in both categories Obesity and Omega-3 are listed here: 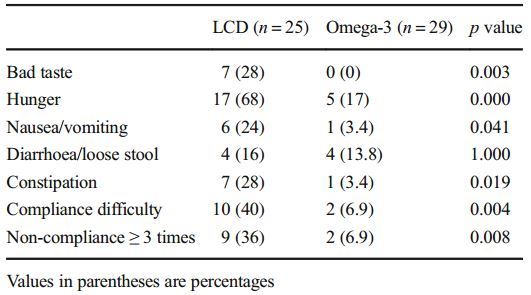 Purpose
Weight loss before bariatric surgery with a low-calorie diet (LCD) has several advantages, including reduction of liver volume and an improved access to the lesser sac. Disadvantages include performing surgery in a state of undernutrition, side effects, costs and patient compliance. Omega-3 fatty acids may serve as an alternative to reduce liver steatosis.

Materials and Methods
A randomised controlled open-label trial was done to compare the effects of a LCD with Modifast (800 kcal/day) during 2 weeks with 2 g of omega-3 fatty acids a day and a normal diet (2000 kcal/day) during 4 weeks. Total liver volume (TLV) and volume of the left liver lobe (LLL), visceral fat area (VFA) and muscle area (SMA) at the L3–L4 level were measured with MRI before and after preoperative treatment.

Conclusion
Both the LCD and omega-3 diet reduced LLL, TLV and VFA. The LCD outperformed the omega-3 diet in LLL and TLV reduction, but induced significant loss of SMA and had worse compliance due to more side effects. Omega-3 fatty acids may provide a safe and more patient-friendly alternative for a LCD and further research is indicated.

4 weeks of Omega-3 better than 2 week 800 calorie diet before Bariatric Surgery – RCT March 2019         Printer Friendly PDF this page! Follow this page for updates
This page is in the following categories (# of items in each category)
Obesity 395 Vitamin D and Omega-3 371