Vitamin D Intake and Season Modify the Effects of the GC and CYP2R1 Genes on 25-Hydroxyvitamin D Concentrations1,2,3

Vitamin D deficiency defined by the blood concentration of 25-hydroxyvitamin D [25(OH)D]} has been associated with many adverse health outcomes. Genetic and nongenetic factors account for variation in 25(OH)D, but the role of interactions between these factors is unknown.

To assess this, we examined 1204 women of European descent from the Carotenoids in Age-Related Eye Disease Study, an ancillary study of the Women’s Health Initiative Observational Study. Twenty-nine single nucleotide polymorphisms (SNPs) in 4 genes, GC, CYP2R1, DHCR7, and CYP24A1, from recent meta-analyses of 25(OH)D genome-wide association studies were genotyped.

Associations between these SNPs and 25(OH)D were tested using generalized linear regression under an additive genetic model adjusted for age, blood draw month, and ancestry.
Results were stratified by season of blood draw and, separately, vitamin D intake for the 6 SNPs showing a significant association with 25(OH)D at the P < 0.01 level.

This effect modification, if confirmed, has important implications for the design of genetic studies for all health outcomes and for public health recommendations and clinical practice guidelines regarding the achievement of adequate vitamin D status. 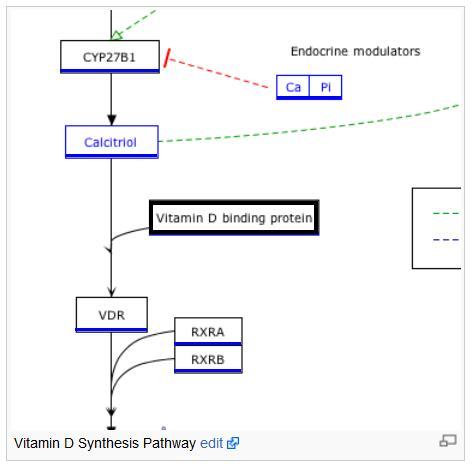 GC and CYP2R1 genes associated with higher summer vitamin D levels – Jan 2013         Printer Friendly PDF this page! Follow this page for updates
This page is in the following categories (# of items in each category)