The Scientific Advisory Committee on Nutrition consultation on its draft Vitamin D and Health report is open for scientific comment.

A cynical person might suggest that this report is politically biased

Attached is a presentation that I have written about this ( &nbspPDF on VitaminDWiki
- and here is a link to a YouTube video of a talk about it
- https://www.youtube.com/watch?v=4j6MurzRj08

Email reply by Dr. Cedric Garland (who has researched vitamin D for 30 years)

This is a step ahead for the UK, of course. Congratulations to you and others in the UK who worked for this.

But 10 micrograms/d (400 IU/d) is a pitifully small dosage, considering the high latitudes of the UK. It is also too low concerning the cloud cover that covers much of the UK population in winter.. For example Edinburgh is at 56 degrees N. Analysis from satellite sources indicate extensive cloud cover in winter in the UK. And, sadly, the UK probably still burns some coal containing sulfur, adding particulate air pollution to the atmosphere that tend to absorb and backscatter solar ultraviolet B.

Yet another reason is the high rates of multiple sclerosis in the UK. Vitamin D deficiency plays a central role in this disease.
The incidence rates are 10-12 per 100,000 in Scotland the prevalence is 200-209 per 100,000 population (Lothian and Border areas, Rothwell & Charloton, 1998). The authors of the Scottish study asserted that its incidence rate of MS is the highest ever reported in the world. For a rough comparison, the prevalence in California-born residents of Los Angeles was 40 per 100,000 in an earlier survey (Detels et al., 1978). There are many other studies in support of this association.

Vitamin D deficiency also has a strong association with incidence of type 1 diabetes. The UK (Oxford) is in the top 10% of areas that have type 1 diabetes registries (Mohr et al., 2008). Use of vitamin D would reduce incidence of this serious disease in the UK should also be considered. This is another reason to recommend 1200 IU/d (30 micrograms/d) rather than 400 IU/day.

I could list many more non skeletal diseases that the proposed 10 microgram/d dose is too small to influence. The UK is sadly missing a chance to achieve these benefits of vitamin D3 by recommending a dose that is too small. The recommended dose of 400 IU/d (10 micrograms/d) would raise serum 25(OH)D by only about 2.8 ng/ml (7 nmol/L).This would do virtually nothing to reduce incidence of cancer, multiple sclerosis, type 1 diabetes and several other important non-skeletal diseases due mainly to the vitamin D deficiency that is rampant in the UK. 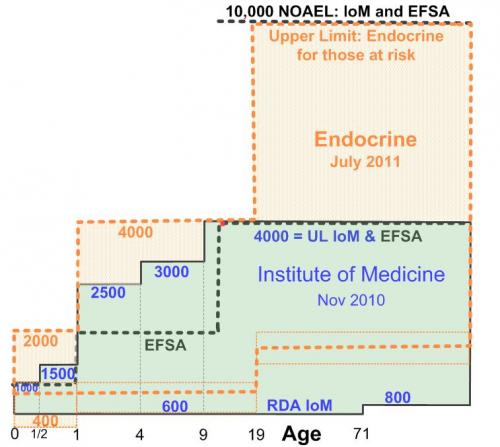 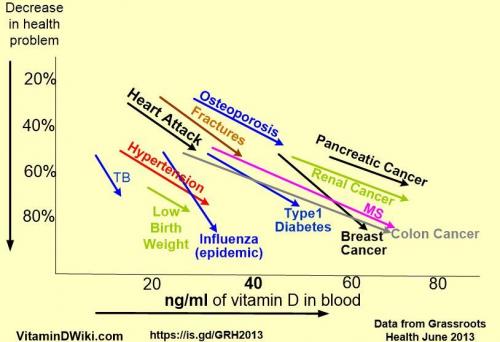 UK proposes that 10 ng level and 400 IU is enough Vitamin D for everybody (no and no)- July 2015         Printer Friendly PDF this page! Follow this page for updates
This page is in the following categories (# of items in each category)
Vitamin D in Europe 216