Germans, like many other Europeans, are vitamin D insufficient - only 12 percent have more than 30 ng - 2015 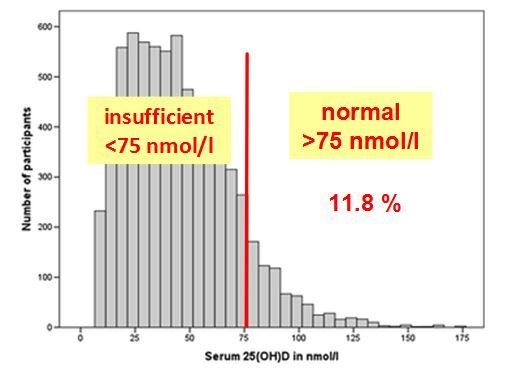 52% of adults have a deficient status (<30 <nmol/l) in wintertime,
30% more adults were deficient than 10 years earlier

&nbspDownload a 2016 PDF from VitaminDWiki

Note: Germany, like many other countries in 2016, considers 20 nanogram level of vitamin D to be adequate

Vitamin D levels around the world (2014)

click on chart for details and other regions of the world

Germans, like many other Europeans, are vitamin D insufficient - only 12 percent have more than 30 ng - 2015

(Cached) Printer Friendly PDF this page! Follow this page for updates
This page is in the following categories (# of items in each category)
Vitamin D in Europe 203
Edit Files 3