Rheumatoid arthritis and many other diseases associated with low Boron – 2012 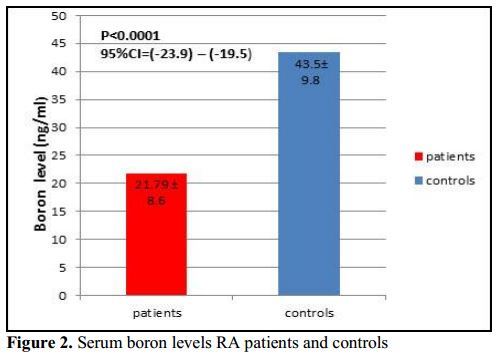 Objectives: Rheumatoid arthritis (RA) is a common chronic inflammatory arthropathy of unknown etiology. Trace elements have a great role in a number of biological processes. The aim of this study was to assess the serum element boron in a sample of Iraqi patients with RA and to evaluate its relationship if present with disease activity, functional class of the disease, and rheumatoid factor (RF).

The importance of trace elements in chronic inflammatory diseases is related to their cofactor role in immune system functions and in different metabolic processes in articular tissues [17].
A variety of trace elements are found in bones including iron (Fe), copper (Cu), zinc (Zn), manganese (Mn), fluoride (F), strontium (Sr), and boron (B) [18]. Although they are present in only minute amounts, trace elements influence normal metabolic processes through interaction with -or incorporation into- proteins, particularly enzymes [19].
Growing evidence from a variety of experimental models shows that boron is a bioactive and beneficial element for humans.
Reported beneficial actions of boron include

Formation of boroesters with the ribose moiety of compounds involved in numerous reactions, such as S-adenosylmethionine and oxidized nicotinamide adenine dinucleotide (NAD+) might be the reason for boron bioactivity [20].
The role of boron is particularly important because it controls the inflammatory process in arthritic conditions by down-regulating specific enzymatic activities typically elevated during inflammation at the inflammatory site [21], inhibiting the inflammatory stress [22], and affecting the production of inflammatory cytokines by cartilage cells and cells involved in the inflammatory response [23].
This study showed that serum boron level was significantly lower in RA patients (21.79 ± 8.6) compared to controls (43.5 ± 9.8). Havercroft and Ward [24] reported that boron concentrations in bone and synovial fluid were lower in RA patients than in healthy controls.
Newnham [25] reported that the occurrence of arthritis is negatively correlated with the amount of boron in the soil and in the food and water supply. In areas where daily boron intakes were typically 1 mg, the estimated incidence of arthritis ranged from 20% to 70%. In areas where daily boron intakes ranged from 3 to >10 mg, the estimated incidence of arthritis ranged from 0% to 10%.

A recent study of 20 patients with mild, moderate, or severe osteoarthritis also found that boron supplementation alleviated subjective measures of arthritis [26]. Patients with mild to moderate arthritis supplemented daily with 6 mg of boron as calcium fructoborate (a naturally occurring boron complex commonly found in fruits and vegetables) reported markedly reduced pain. By week 8, 80% of the test participants reduced or eliminated their use of painkillers. In addition, joint rigidity essentially disappeared, and mobility was markedly increased at 8 weeks. Patients with severe arthritis, who were supplemented daily with 12 mg of boron as calcium fructoborate, exhibited a more subdued improvement in mobility and rigidity but still reported a significant reduction in the use of painkillers. These findings, however, are weakened by the non-blinding to treatment and lack of placebo controls.
Additionally, another study in juvenile idiopathic arthritis (JIA) reported that boron supplementation at 3-9 mg per day may be beneficial [27]. A finding of note in this study was that serum boron level was not significantly correlated with disease activity, functional class, and ESR of RA patients; this may be explained by medications used in RA that control disease activity and subsequently improves activity and functional class.
Interestingly, the current study showed significant negative correlation between serum boron level and RF, a predictive of more aggressive and erosive articular disease and poorer long-term function in RA patients [28]; this may suggest that boron deficiency can be associated with the severity of RA disease.
The small size of the studied sample and short period of the study were the main limitations of the present study and these can be increased in larger scales, multicenter prospective studies, with longer period of follow up to support the reported data. Yet, in spite of that, this study has points of strength like strict inclusion and exclusion criteria, and defined data measurement and collection.
In conclusion, serum boron level was significantly lower in RA patients compared to controls and significantly negatively correlated with RF in RA patients. This may indicate that B element may play a role in pathophysiology of RA and its severity which is clinically relevant and suggest the importance of boron element supplementation to RA patients and even more important to individuals who are at high risk of developing RA.

Rheumatoid arthritis and many other diseases associated with low Boron – 2012

(Cached) Printer Friendly PDF this page! Follow this page for updates
This page is in the following categories (# of items in each category)
Rheumatoid Arthritis 98 Top news 809 Vitamin D and Boron 28
Edit Comments Files 2