BACKGROUND: Low levels of plasma 25-hydroxyvitaminD (25(OH)D) are associated with a higher incidence of multiple sclerosis (MS) due to the immune suppressive properties of vitamin D.The aim of this study was to determine the correlation between plasma 25(OH)D concentrations and clinical and immunological variables in a cohort of multiple sclerosis patients.

CONCLUSIONS: 25(OH)D is an immunomodulatory molecule that might have a regulatory role in T-cell proliferation to myelin peptides in RRMS patients. 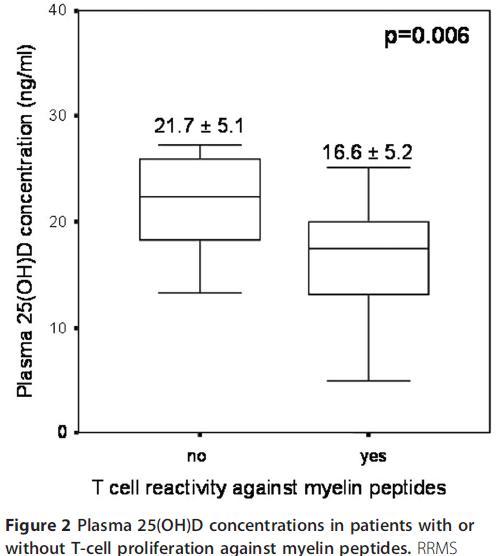 Vitamin D associated with reduced T-cell attacks in Multiple Sclerosis – Sept 2012         Printer Friendly PDF this page! Follow this page for updates
This page is in the following categories (# of items in each category)
Multiple Sclerosis 382