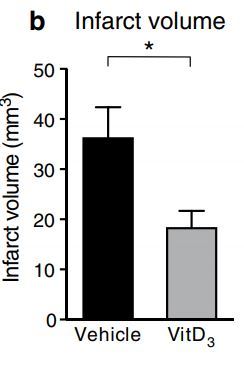 Acute inflammation can exacerbate brain injury after ischemic stroke. Beyond its well-characterized role in calcium metabolism, it is becoming increasingly appreciated that the active form of vitamin D, 1,25-dihydroxyvitamin D3 (1,25-VitD3), has potent immunomodulatory properties. Here, we aimed to determine whether 1,25-VitD3 supplementation could reduce subsequent brain injury and associated inflammation after ischemic stroke. Male C57Bl6 mice were randomly assigned to be administered either 1,25-VitD3 (100 ng/kg/day) or vehicle i.p. for 5 day prior to stroke. Stroke was induced via middle cerebral artery occlusion for 1 h followed by 23 h reperfusion. At 24 h post-stroke, we assessed infarct volume, functional deficit, expression of inflammatory mediators and numbers of infiltrating immune cells. Supplementation with 1,25-VitD3 reduced infarct volume by 50% compared to vehicle. Expression of pro-inflammatory mediators IL-6, IL-1β, IL-23a, TGF-β and NADPH oxidase-2 was reduced in brains of mice that received 1,25-VitD3 versus vehicle. Brain expression of the T regulatory cell marker, Foxp3, was higher in mice supplemented with 1,25-VitD3 versus vehicle, while expression of the transcription factor, ROR-γ, was decreased, suggestive of a reduced Th17/γδ T cell response. Immunohistochemistry indicated that similar numbers of neutrophils and T cells were present in the ischemic hemispheres of 1,25-VitD3- and vehicle-supplemented mice. At this early time point, there were also no differences in the impairment of motor function.
These data indicate that prior administration of exogenous vitamin D, even to vitamin D-replete mice, can attenuate infarct development and exert acute anti-inflammatory actions in the ischemic and reperfused brain.

Stroke volume half as large if had good level of vitamin D (mice) – Feb 2018         Printer Friendly PDF this page! Follow this page for updates
This page is in the following categories (# of items in each category)
Stroke 106