Note: study appeared to have 4 different dosing: 50,000 IU D weekly, 6,000 IU daily with D2 and D3
They did not separate out the results (probably did not reach statistical significance if looked at separately)
Vitamin D levels achieve was 32 ng - thus about half did not have enough to make a diffeence


Objective: The effects of vitamin D on the central and peripheral nervous system continue to be investigated today. In the present study, we aimed to evaluate pain and electrophysiologic response in patients with carpal tunnel syndrome (CTS) who have undergone replacement therapy due to vitamin D deficiency.

Methods: Fifty female patients diagnosed with mild and moderate CTS and accompanied by vitamin D deficiency were included in this study. Nerve conduction study (NCS) was performed before and after vitamin D replacement, and the patient's pain was evaluated with Visual Analogue Scale (VAS).

Results: When NCS were compared before and after treatment, there was a statistically significant improvement in the median distal sensory onset latency (DSOL) and sensory conduction velocity (CV) and motor distal latencies (DML) values (p=0.001; p<0.001; p=0.001, respectively). At the same time, there was a decrease in the VAS values in patients (p<0.001). When the two groups were compared there was an improvement in DSOL and sensory CV in both groups, but in DML only in moderate CTS group.

Conclusion: In this study, it was shown that mild and moderate CTS patients had an improvement in pain and electrophysiological parameters after vitamin D replacement. Replacing vitamin D in early stages of CTS may be beneficial.

SEOUL, Aug. 30 (Korea Bizwire) — A lack of vitamin D could increase the risk of carpal tunnel syndrome, which causes muscle weakness and numbness in the hands, a local study has revealed.

The results showed that women with low levels of vitamin D were about 2.3 times more likely to develop carpal tunnel syndrome than normal groups.

In addition, the lower the vitamin level, the earlier in age the disease was reported.

In particular, the effects of deficiency were even greater in groups under the age of 50, and the risk of developing carpal tunnel syndrome was found to be about five times higher.

“A lack of vitamin D can cause upward adjustment of the receptor to compensate for the deficiency, which causes the proliferation of intravenous wall cells and connective tissue,” the team explained.

“That’s why the tunnel eventually becomes cramped and affects the incidence of carpal tunnel syndrome,” the team added.

After checking vitamin levels prior to surgery, the team corrected the deficiency by treating patients who were deficient for six months.

As a result, the recovered group showed better results in the DASH test which evaluates postoperative results of carpal tunnel syndrome.

“Vitamin D is good for keeping your nerves healthy as well as your bones and muscles, so if it’s hard to supply enough food and sunlight, it’s better to take nutritional supplements,” said Prof. Gong Hyun-sik, a professor at SNU Bundang Hospital who led the research team.

In order to evaluate the effect of vitamin D3 we have evaluated around 50 patients in whom vitamin D deficiency was found & were suffering from CTS. They were all given deep intramuscular 6 lakhs unit of vitamin D. Out of this 12 patients had a substantial relief to full relief in whom surgery was deffered. The idea of writing this paper was a further study is warranted to prove its larger role in many compressive neuropathies & metabolic neuropathies if it can lead to clinical improvement in patients can save some of them from surgery

Cliped from PDF
CTS may be classified into three stages:


During 1st author’s yearly regular health check-up a deficiency of vitamin D was diagnosed. His level was 7 (normal reference range 30 to 100). So 1st author took an injection of 6 lakh unit of vitamin D3 (cholecalciferol) deep intramuscular. To author’s surprise the tingling & numbness disappeared suddenly. Till now 1.5 year has been passed & he is still asymptomatic.

Rest is in the PDF

Measurements were made at the time of Carpal Tunnel Surgery

&nbspDownload the PDF from Sci-Hub.tw via VitaminDWiki

BACKGROUND:
Carpal tunnel syndrome (CTS) and vitamin D deficiency are two discrete common clinical pictures that can cause chronic pain. In this study, we aimed to evaluate the association of 25 (OH) D deficiency with electrophysiological findings and severity of pain in patients with mild CTS.
METHOD:
The consecutive patients admitted to our laboratory with the symptoms of CTS between May 2016 and August 2016 were enrolled in this study. According to their electrophysiological examination results, only the patients with normal conduction results and ones with mild grade CTS were included. Demographic data, the results of the electrophysiological studies, vitamin D levels (our laboratory normal is > 20 ng / mL), duration of pain and pain intensity due to CTS which was assessed with visual analog scale were collected.
RESULTS:
Totally, 76 patients (36 patients with mild CTS and 40 without CTS) were included. In the mild CTS patients, vitamin D levels were significantly lower than those electrophysiologically normal patients (p = 0.003). The relationship between gender, duration of pain and vitamin D levels were evaluated in the normal and mild CTS group. There was no significant relationship between the pain and vitamin D levels in the normal group, while vitamin D level was significantly lower in the mild CTS group (p = 0.730 and p = 0.002; respectively).
DISCUSSION:
Vitamin D deficiency increases the pain intensity in patients with CTS. Treatment of vitamin D deficiency in these patients may play a role in pain relief. Further studies involving analyses of post-Vitamin D replacement therapy are warranted to confirm the association between vitamin D deficiency and pain due to CTS. 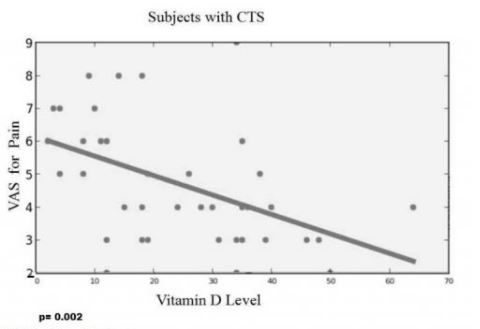 Review of this study by Vitamin D Council May 2016

Could Vitamin D be Linked to Carpal Tunnel Syndrome? MedPageToday

The aim of this study was to evaluate the relationship between 25-hydroxyvitamin D (25(OH)D) levels and carpal tunnel syndrome (CTS). 25(OH)D levels were checked in 108 consecutive patients with CTS symptoms and 52 healthy controls. All patients underwent nerve conduction studies and completed Boston Carpal Tunnel Questionnaire (BQ) symptom severity and functional status scales to quantify symptom severity, pain status and functional status. There were 57 patients with electrophysiological confirmed CTS (EP+ group) and 51 electrophysiological negative symptomatic patients (EP− group). 25(OH) D deficiency (25(OH)D < 20 ng/ml) was found in 96.1 % of EP− group, in 94.7 % of EP+ group and in 73.8 % of control group. 25(0H) D level was found significantly lower both in EP+ and EP− groups compared to control group (p = 0.006, p < 0.001, respectively). Although mean vitamin D level in EP− group was lower than EP+ group, statistically difference was not significant between EP+ and EP− groups (p = 0.182). BQ symptom severity and functional status scores and BQ pain sum score were not significantly different between EP+ and EP− groups. We found no correlation with 25(OH) D level for BQ symptom severity, functional status and pain sum scores. 25(OH) D deficiency is a common problem in patients with CTS symptoms. As evidenced by the present study, assessment of serum 25(OH)D is recommended in CTS patients even with electrophysiological negative results.
References are online, free

The Effect of Vitamin D Deficiency Correction on the Outcomes in Women After Carpal Tunnel Release
The Journal of Hand Surgery. https://doi.org/10.1016/j.jhsa.2019.03.008

Purpose
Studies suggest that vitamin D supplementation improves myelination and recovery after nerve injuries. The purpose of this study was to evaluate whether correction of vitamin D level leads to better surgical outcomes in women with both carpal tunnel syndrome (CTS) and vitamin D deficiency.

Results
At 6 months, 59 patients became vitamin D–nondeficient (≥ 20 ng/mL) and 25 were still vitamin D–deficient (< 20 ng/mL). Patients who became vitamin D–nondeficient had subtle but better DASH scores than patients who were still vitamin D–deficient or the control patients. Vitamin D levels at 6 months were found to have significant correlation with the DASH score at 6 months. Vitamin D levels at 6 months did not have significant correlation with motor conduction velocity or grip and pinch strengths.