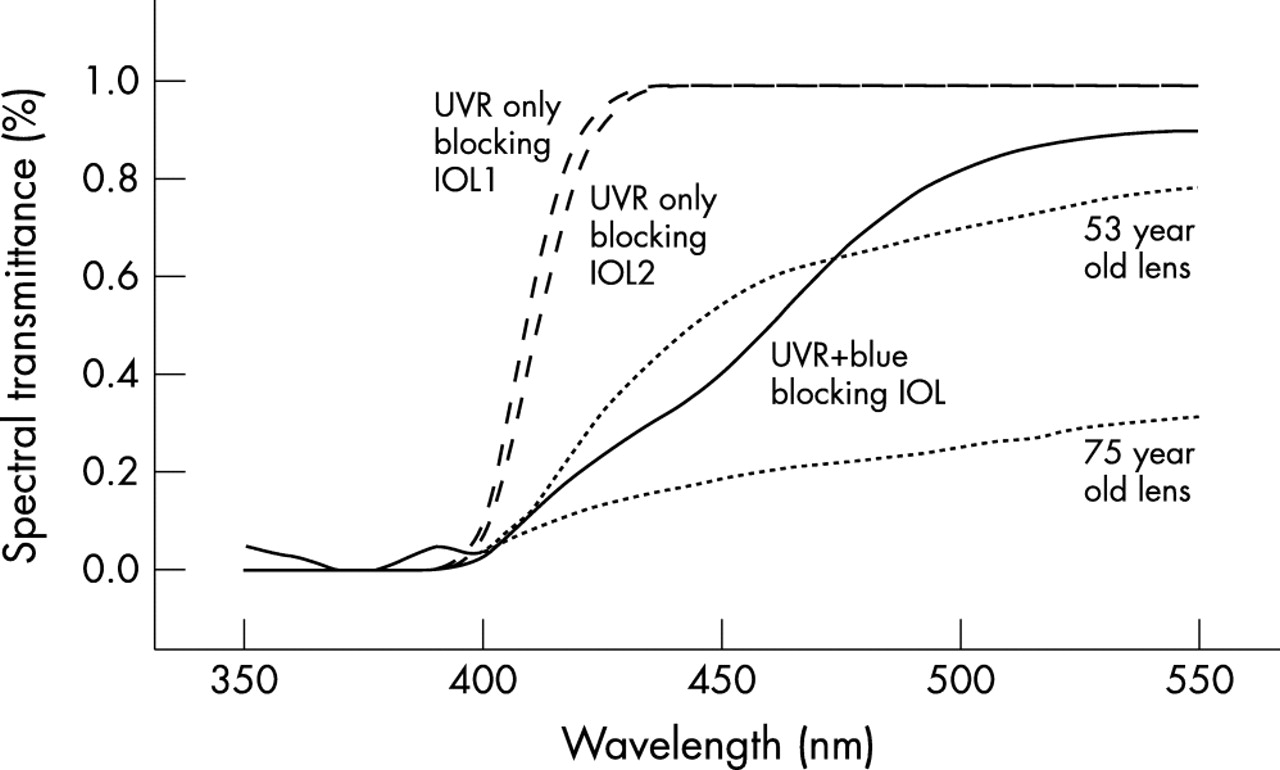 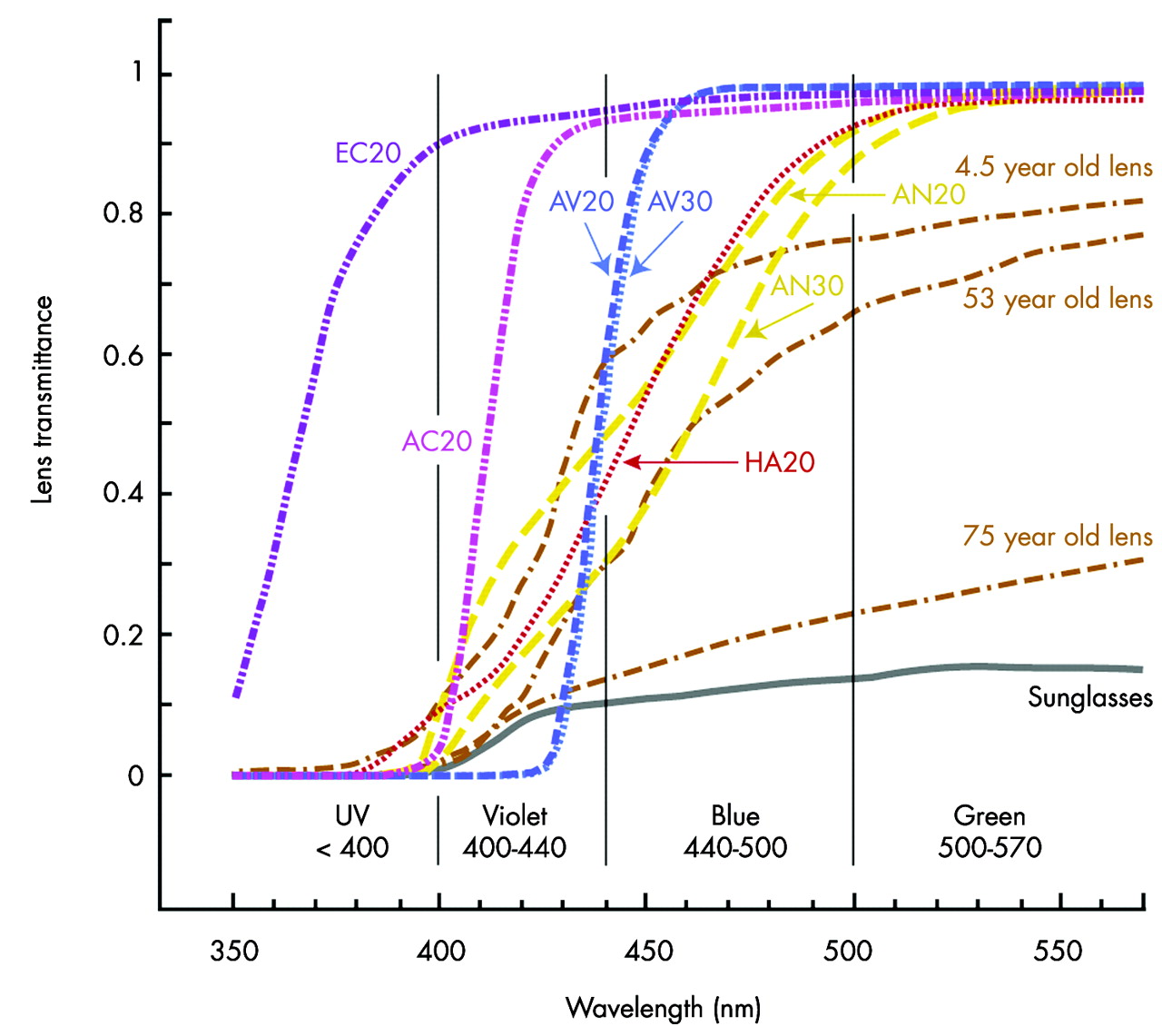 In addition, there had been discussion about IOLs which block blue light


Article on web which refers to the subsequent paper

Since intraocular lenses that filter blue light were introduced in the U.S. nearly 10 years ago, whether the benefits they provide for patients are outweighed by the disadvantages has remained a matter of debate.
It is generally accepted that excessive exposure to blue light, although how much is not certain, damages retinal pigment epithelial cells, a precursor to several ocular diseases, including age-related macular degeneration. Blue light has also been shown to stimulate the proliferation of choroidal melanoma cells in vitro. Proponents of blue light-filtering IOLs maintain they should be routinely used because they can protect the retina from these potential hazards as well as reduce glare sensitivity and cyanopsia and increase contrast sensitivity in ambient light conditions for post-cataract surgery patients.
Those who do not advocate routine use of blue light-filtering IOLs don’t necessarily doubt their benefits, but they question whether the benefits come at the expense of visual acuity, color vision, contrast sensitivity in scotopic light conditions, and perhaps interference with patients’ natural circadian rhythms.
For Bonnie Henderson, M.D., assistant clinical professor of ophthalmology, Harvard Medical School, Boston, Mass., following the opposing viewpoints was more than a theoretical exercise. Her monofocal IOL of choice is the AcrySof IQ IOL (Alcon, Fort Worth, Texas), a blue light-filtering lens designed to simulate the light transmission characteristics of the noncataractous human crystalline lens. “I wanted to take a comprehensive, objective look at all available literature on the issue,” she said. She independently initiated a review of all peer-reviewed published studies regarding the impact of blocking the transmission of blue light. The project was not suggested by any lens manufacturer and she did not receive any payment or funding from industry.
The results of Dr. Henderson’s literature review were published recently in Survey of Ophthalmology. 1“I was relieved to find that the vast majority of literature supports that these lenses are beneficial and do not appear to be harmful,” she said.
In the course of her review, Dr. Henderson found 56 reports, published from 1962 to 2009, on subjects related to blue light-filtering lenses, including sleep disturbance, visual outcomes, cataract surgery, lens transmittance, and sunlight exposure. Eleven reports specifically compared visual outcomes between blue light-filtering IOLs and non blue light-filtering IOLs. Of those 11 reports, 10 concluded that an IOL that filters blue light has no significant detrimental effect on various measures of visual performance, including visual acuity, contrast sensitivity, color perception, and photopic, mesopic, and scotopic sensitivities. Only one group of authors reported that the use of such IOLs may have detrimental effects on scotopic vision and circadian rhythms.
“While these opposing studies are certainly valid, I question whether the amount of contrast sensitivity degradation is clinically relevant,” Dr. Henderson said.“Maybe sensitivity is reduced in a laboratory setting, but none of the studies that evaluated patients’ real world vision with a blue-blocking IOL showed they had any difficulty with visual function or any trouble with activities of daily living because of the lens. In fact, they found the filtering of blue light actually improved contrast sensitivity and sensitivity to glare. The reported negative effects on circadian rhythms also appear to be mini mal and may not be clinically relevant.”
Dr. Henderson’s review was not intended to evaluate the relation ship between blue light and macular disease, “so the debate about whether or not filtering blue light in pseudophakic individuals pro tects from AMD continues,” she said. “Since this paper was written in early 2009, many new studies on this topic have been published. Based on the original literature review that was performed and with the additional new studies that have been published evaluating the performance of blue light-filtering lenses, I have continued to implant the AcrySof IQ IOL with the confi dence that it is a safe and effective choice for my patients.”

Blue-blocking IOLs: a complete review of the literature.

Intraocular lenses (IOLs) that block both ultraviolet and blue wavelength light (<500 nm) were introduced in the 1990s. Since then, the potential benefits and harm from blocking blue light has been debated. We report the results of a complete review of all peer-reviewed published studies regarding the impact of blocking the transmission of blue light. Fifty-six published reports on subjects related to blue-blocking lenses including sleep disturbance, visual outcomes, cataract surgery, lens transmittance, sunlight exposure, and macular disease were found in peer reviewed journals from 1962 to 2009. Eleven reports specifically compared visual outcomes between blue-blocking IOLs and nonblue-locking IOLs. Of these, 10 independent studies (10/11, 91%) concluded that there are no significant effects of blue-blocking IOLs on various meters of visual performance including visual acuity, contrast sensitivity, color perception, and photopic, mesopic, and scotopic sensitivities. Only one group of authors reported that the use of blue-blocking IOLs may have detrimental effects on scotopic vision and circadian rhythms. However, the actual clinical significance of these potential negative effects on scotopic vision and on sleep patterns is uncertain. The benefits of blocking the transmission of blue light to the macula and the relationship between progression of age-related macular degeneration remain unclear. However, the published studies clearly state that the use of blue-blocking IOLs is not detrimental in visual acuity, color perception, and contrast sensitivity. The reported potential negative effects on scotopic vision and sleep disturbance appear to be minimal and may not be clinically relevant. (Surv Ophthalmol 55:284--289, 2010. 2010 Elsevier Inc. All rights reserved.) PMID: 20499436

In fact, it is the most frequently performed surgery in the United States, with more than 3 million Americans undergoing cataract surgery each year. Nine out of 10 people who have cataract surgery regain very good vision, somewhere between 20/20 and 20/40.

Most cataract surgery intraocular lenses block UV         Printer Friendly PDF this page! Follow this page for updates
This page is in the following categories (# of items in each category)