Prisoners have very low vitamin D and get TB, influenza, and depression 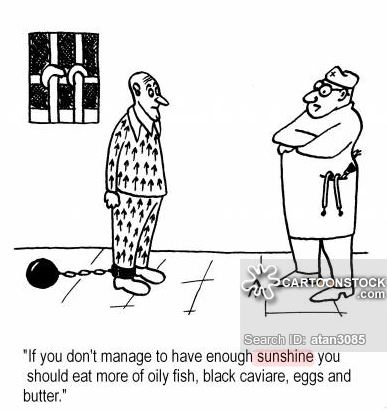 Objective
Adequate nutrition among inmates at correctional facilities may prevent a variety of diseases and conditions. Vitamin D is a nutrient of particular interest to incarcerated populations; however, research in this area is sparse. Therefore, we sought to assess vitamin D status among inmates in a prison in southern Arizona, a sun-replete region of the U.S.

Conclusions
This study demonstrates the presence of Vitamin D deficiency at the Fourth Avenue Jail in Maricopa County, AZ, particularly among inmates who have been housed at the facility for > 1 year. Because frank vitamin D deficiency is associated with a myriad of adverse health outcomes, consideration should be given to providing dietary or supplemental vitamin D to inmates at correctional facilities. 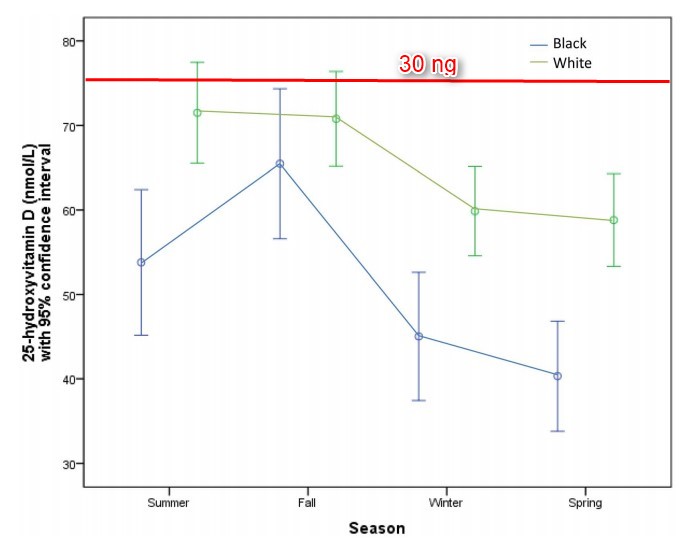 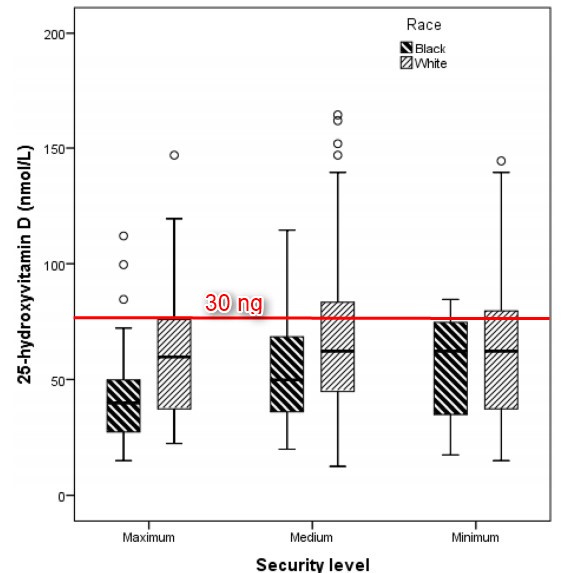 INTRODUCTION:
There is no comprehensive, systematic analysis of the vitamin D status of prisoners in the scientific literature.
OBJECTIVE:
To investigate the vitamin D status and its determinants in US prison inmates.
HYPOTHESIS:
Given the uniformity of dietary intake amongst inmates, vitamin D status will be determined by non-dietary factors such as skin pigmentation, security level-, and the duration of incarceration.
SUBJECTS AND METHODS:
A retrospective study of 526 inmates (males, n=502, age 48.6 ± 12.5 years; females, n=24, age 44.1 ± 12.2) in Massachusetts prisons. Vitamin D sufficiency, insufficiency, and deficiency were respectively defined as a 25(OH)D concentration 75 nmol/L; 50 to 75 nmol/L; and <50 nmol/L. The Massachusetts Department of Correction Statement of Nutritional Adequacy stated that each inmate received the recommended daily allowance of vitamin D daily. Security level of incarceration was designated as minimum, medium, and maximum. Racial groups were categorized as Black, white, Asian, and Others.
RESULTS:
Serum 25(OH)D levels peaked in summer and autumn, and decreased in winter and spring. Vitamin D deficiency occurred in 50.5% of blacks, 29.3% of whites, and 14.3% of Asian inmates (p=0.007). Black inmates had significantly lower serum 25(OH)D level than white inmates at the maximum security level (p=0.015), medium security level (p=0.001), but not at the minimum security level (p=0.40). After adjusting for covariates black inmates at a maximum security level had a four-fold higher risk for vitamin D deficiency than white inmates at the same security level (OR 3.9 95% CI 1.3-11.7.
CONCLUSIONS:
The vitamin D status of prison inmates is determined by skin pigmentation, seasons, and the security level of incarceration.

The story of the vitamin D–influenza link is actually telling the tale of the work done by Dr. John Cannell.
I have been in personal communication with Dr. Cannell over a number of years and have carefully followed his work and that of his non-profit Vitamin D Council.

When I first spoke with Dr. Cannell several years ago, he told me about his work as a psychiatrist at the Atascadero State Hospital in California.
Interested in vitamin D, and suspecting common vitamin D deficiency among his inmates, Dr. Cannell regularly tested inmates for vitamin D adequacy.
As he expected, he found they had abnormally low levels of vitamin D and, after explaining the benefits of this vitamin, he prescribed for the inmates 2000 IU vitamin D3 (cholecalciferol) a day.

In the late winter of 2005, a virulent strain of influenza hit the maximum-security psychiatric hospital, and although 10% of the 1200 patients ultimately developed the flu’s fever and debilitating muscle aches, there were, no cases of flu among Dr. Cannell’s inmates Dr. Cannell’s, who had been given daily vitamin D supplements. In a 2006 interview, Dr. Cannell said, “First, the ward below mine was quarantined, then the wards on my right, left, and across the hall.” And even though Cannell’s inmates had mingled with the others prior to quarantine, they still managed to avoid the flu.

How was it that his inmates were able to dodge the flu? A few months later, he came across a scientific report stating that vitamin D was found to increase the production of natural antimicrobial compounds in white blood cells. It was then that Dr. Cannell’s “Aha!” moment occurred. Could it have been the vitamin D he routinely gave his inmates that protected them from the flu? Encouraged by his colleagues, Dr. Cannell and seven other noted vitamin D scholars reviewed more than 100 articles that — in one way or another — linked vitamin D with enhanced immunity and fewer respiratory infections.

The research reports that pointed to a D–influenza link included findings like these:

These early research findings, along with his own experience with his inmates, led Dr. Cannell to boldly suggest that vitamin D deficiency could underlie a vulnerability to influenza infection. Since the first article on influenza and vitamin D was published in 2006, a new body of research has developed that strongly supports the hypothesis that low vitamin D levels increase vulnerability to flu and that high vitamin D levels offer a protective effect.

In 2007, Dr. Cannell and colleagues published a second paper on the vitamin D–influenza connection in the Virology Journal. Here they explored 9 key questions including, “Why is influenza both seasonal and ubiquitous, and what happens to the virus between epidemics?” “Why are influenza epidemics so explosive?” “Why do they end so abruptly?” and so forth. An important part of the answers to each of these questions pertains to the fascinating role vitamin D plays in the enhancement of innate immunity.

Study Reveals Rising Suicide Rate In Female Prisoners 02 Feb 2009
Suicide is 20 times more common in female prisoners than in the general female population, according to new research. The research, published in the February issue of the British Journal of Psychiatry, also shows that the suicide rate for female prisoners has steadily increased over the last 25 years. And younger prisoners are at greater risk of killing themselves than older inmates. Psychiatrists Dr Seena Fazel, from the University of Oxford, and Dr Ram Benning, from Derby City Hospital, studied suicides in female prisoners between 1978 and 2004. Eight-three suicides were recorded in total.

The suicide rate for all female prisoners compared with the general female population of similar ages (also known as the standardised mortality ratio or SMR) was 20.7. In other words, female prisoners of all ages were about 20 times more likely to kill themselves than other women. This trend has been steadily increasing over the last 25 years.

In 2005, Dr Fazel and colleagues examined the suicide rate in male prisoners, and found that suicide was five times more common in male prisoners than in the general population. This new study therefore points to a clear 'gender gap' in suicide for male and female prisoners.

Dr Fazel and Benning put forward a number of explanations for this gender gap. For example, women entering prison may already be at a higher risk of suicide because they have existing mental health problems, such as depression, a history of self-harm, or a drug or alcohol addiction. The prison environment may also affect women differently to men.

Writing in the February issue of the British Journal of Psychiatry, they said: "One possible explanation for higher SMR for suicide in female prisoners is that females entering prison may have higher prevalences of risk factors associated with suicide, such as depression, previous self-harm and history of physical and sexual abuse. Substance misuse is a risk factor for prison suicides, and a systematic review has shown that the relative excess misuse in prisoners compared with the general population is higher for female inmates. Another explanation is that prison may specifically increase the vulnerability of females to suicide."

The researchers say the reasons for the increasing suicide rate in female prisoners over the last 25 years are 'complex'. However, a likely explanation is that more women are now being convicted for drug-related offenses, meaning greater numbers of women are entering prison with drug problems.
The researchers say their latest findings support the need for national initiatives to help prevent suicide in prisoners.
"Suicides in female prisoners in England and Wales, 1978-2004"
Fazel S and Benning R (2009) British Journal of Psychiatry, 194: 183-184

Got to wondering about others (not just prisoners) who are kept away from the sun
Poor health due to lack of vitamin D: dementia, shorten life, etc. etc.
Senior homes, Assisted living
Submarines Vitamin D Supplementation in Underway Submariners
Long-haul truck drivers - 16 years reduced life expectancy
Shift workers (some)
Psychiatric hospitals - which is where Dr. Cannell first got interested in vitamin D

Vitamins against violence: aggressive Dutch inmates to get health kick 2015

". . .drop of 34 percent in incidents,"
"Aggression is a feature of prison life in many countries."

Prisoners have very low vitamin D and get TB, influenza, and depression         Printer Friendly PDF this page! Follow this page for updates
This page is in the following categories (# of items in each category)