Obese people are known to have lower serum 25OHD levels compared to non-obese people. It is not known whether it is due to storage of vitamin D in fat, inadequate input from sunlight, diet or other unknown factors. We examined the relationship at study baseline of serum 25OHD, PTH, 1,25(OH)2D with body composition measurements using Dual energy X-ray Absorptiometry. The results showed a significant inverse relation between total body fat mass and serum 25OHD (p < 0.0001) and serum 1,25(OH2)D (p = 034) and an independent positive correlation between serum PTH and total body fat mass (p < 0.0001). In a randomized controlled study of seven doses of vitamin D (400-4800IU/d) the increase in serum 25OHD levels was compared in women with a normal body mass index to obese women. The response to the low doses of vitamin D (400-800IU/d) was significantly less than that of the medium (1600-2400IU/d) and high doses groups (3200-4800IU) (p < 0.0001) in all BMI categories. The increase in serum 25OHD in the medium and high dose groups was not significantly different with increasing level of obesity. But thinner women with a normal BMI (< 25 kg/m2) showed a much higher response to vitamin D at any dose level compared to other BMI groups. There was no significant change in total body fat mass after treatment with vitamin D or calcitriol in our randomized trials. In summary, the response to vitamin D is dependent on body weight. Women with BMI <25 kg/m2 develop much higher levels of serum 25OHD after vitamin D supplementation compared to those with BMI of >25 kg/m2 .The differences in serum 25OHD levels between normal and obese women may be due to differences in volume dilution. After vitamin D supplementation, all obese women reach adequate levels of serum 25OHD but normal women (BMI < 25 kg/m2) reach much higher levels of 25OHD and in this group smaller doses of vitamin D used should be used. 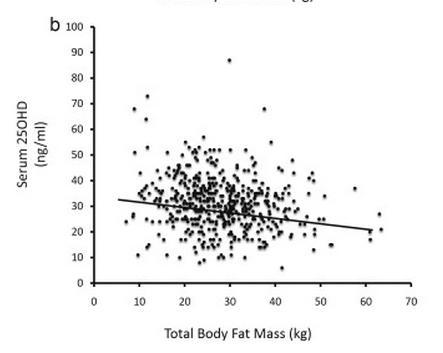 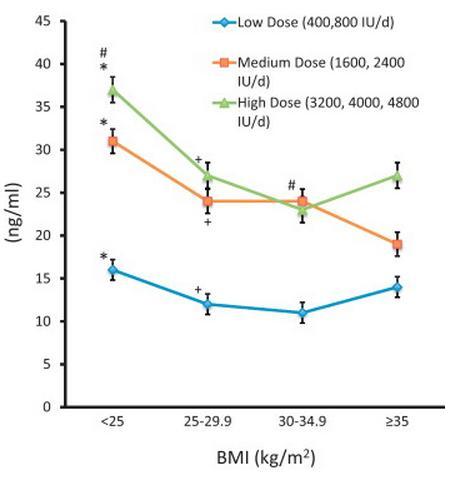 Obese need more Vitamin D: Volume dilution, IU per pound, or BMI – RCT Dec 2012         Printer Friendly PDF this page! Follow this page for updates
This page is in the following categories (# of items in each category)