Mortality varies with latitude in the UK – Feb 2011

Trends in mortality from 1965 to 2008 across the English north-south divide: comparative observational study

(To) Editor:
(Author) William B Grant
The paper by Hacking et al. [1] highlights the north-south divide in
population-wide all-cause mortality rates for England for the period 1965-
2008. The northern excess was around 14.9% for males and 12.7% for
females, with a monotonic increase since 2000. In the discussion, it was
stated that 14.0% of the northern excess for the period 2004-6 could be
attributed to smoke, while 3.5% could be attributed to alcohol
consumption. These two factors, then, explain 2.6% excess for males and
2.2% excess for females, leaving unexplained 12.3% for males and 10.5% for
females. It was noted that economic and income disparity between north and
south could explain a large portion of the unexplained differences.

Graph from the paper being referred to 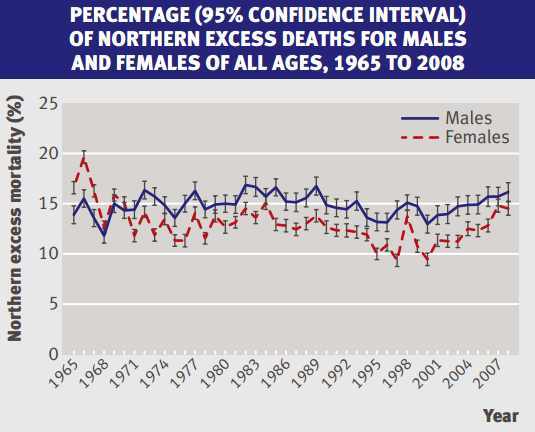 The difference in serum 25(OH)D levels between the northern and
southern portions of England can be estimated in a couple of ways. One is
to use data for postmenopausal women reported by Macdonald [4]. They
reported serum 25(OH)D levels in the UK at 57? N (Aberdeen, Scotland) and
51? N (Surrey, England). The northern region of England discussed is near
54.5? N. When adjusted for the smaller latitudinal difference, the
differences were estimated at 11.4 nmol/l in summer and 7.5 nmol/l in
winter.

An alternate calculation involves annual hours of sunlight using data
on sunshine duration from the Met Office [5]. In a simple estimate with
respect to latitude based on a color map of annual hours of sunshine
duration in the UK, in the northern part of England, the annual duration
is about 1320 hours, while in the southern part, it is near 1540 hours.
The ratio of the two is 1.17. This is similar to the estimate of 1.24 and
1.26 based on serum 25(OH)D levels [4]. Using this estimate yields
differences of 7.8 nmol/l in summer and 5.1 nmol/l in winter. The higher
numbers from Macdonald [4] are possibly a bit more accurate as the more
important value is solar UVB doses, and it falls more rapidly than
sunshine due to the longer path through the atmosphere [6].

Furthermore a substantial portion of the northern population lives in
old "cotton towns". These were built in damp cloudy areas away from the
sunnier coastal belt because of the ample supply of water and hydro-power.
Some other northern towns developed in places where there were coal and
iron deposits while the market towns of the south were built next to
relatively sunny, highly productive, lowland farms.

An oral vitamin D dosing study in the United States found that 1000
IU/d corresponded to about a 25 nmol/l increase in serum 25(OH)D level
[7]. However, there is considerable individual-to-individual variation
[8]. In ecological studies in the United States, use of summertime UVB
doses was found to be a good index of vitamin D production in relation to
cancer mortality rates [9]. Using the value of 11.4 nmol/l as the
difference appropriate for the older population with the highest mortality
rate, it corresponds to 454 IU/d of vitamin D3.

A meta-analysis of mortality rate reduction associated with vitamin D
supplementation found a 7% (+/-6%) reduction for a mean oral intake of 528
IU/d [10]. From the ratio of 454 to 528, it could be expected that there
would be a 6% excess mortality rate in the north due to lower serum
25(OH)D level. This represents 40% of the male excess and 47% of the
female excess.

One reason for the monotonic increase in mortality rate since 2000
could be the widespread publicity about the risks of skin cancer and
melanoma through UV irradiance. A recent study noted decreased serum
25(OH)D levels among those with fairer skin in the UK [11].

The health benefits of raising serum 25(OH)D levels at the national
level could have tremendous health and economic benefits. The benefits of
vitamin D extend to many types of cancer, cardiovascular disease,
diabetes, bacterial and viral infectious diseases, autoimmune diseases,
brain health, and pregnancy outcomes [12]. A series of five papers has
been published estimating the reductions in all-cause mortality rate
and/or economic burden associated with increasing serum 25(OH)D levels
from 60-70 nmol/l to about 105 nmol/l [13-17]. The findings were that the
all-cause mortality rate would be reduced by 15-20% and the direct
economic burden by about 10%.

It would take daily oral intake or production from UVB of 2000-4000
IU/d to achieve these increases [7,8]. The Institute of Medicine of the
National Academies recently accepted 4000 IU/d of vitamin D3 as having no
adverse effects while noting that no adverse effects had been reported for
less than 10,000 IU/d [18]. In the United States, it is possible to obtain
a year's supply of vitamin D3 for $10.00 [www.bio-tech-pharm.com,
Fayetteville, AR]. It is more expensive in the UK.

While the IOM report found health benefits of vitamin D only for
bones and recommended 600 IU/d for those under the age of 71 years and 800
IU/d for those 71 years or older, there were serious flaws in the study
design and conclusion noted in several letters and editorials [19-22].

Oliver Gillie has made a detailed study of the north/south effect on
UK health [23] which is more clearly evident when Scots mortality is
compared with English mortality. Mortality is greater in Scotland than in
England across all social classes and smoking, alcohol and poverty account
for less than a half of the difference between Scotland and England.
Gillie argues that vitamin D insufficiency may account for much of the
remaining difference and this is borne out by his study of the
Scottish/English distribution of diseases associated with vitamin D
deficiency. Gillie has argued for several years that the UK should revise
its policy on UVB irradiance and vitamin D [24,25] The analysis in this
commentary supports his concerns.

The UK Food Standards Agency (FSA) convened an international group of
scientific experts to review three Agency-funded projects commissioned to
provide evidence for the relative contributions of two sources, dietary
vitamin D intake and skin exposure to UVB rays from sunlight, to vitamin D
status [26]. Hopefully, such actions indicate an increased awareness of
the health benefits of vitamin D by the UK government.

13. Grant WB. In defense of the sun: An estimate of changes in mortality rates in the United States if mean serum 25-hydroxyvitamin D levels were raised to 45 ng/mL by solar ultraviolet-B irradiance. Dermato-Endocrinology, 2009;1:207-14. 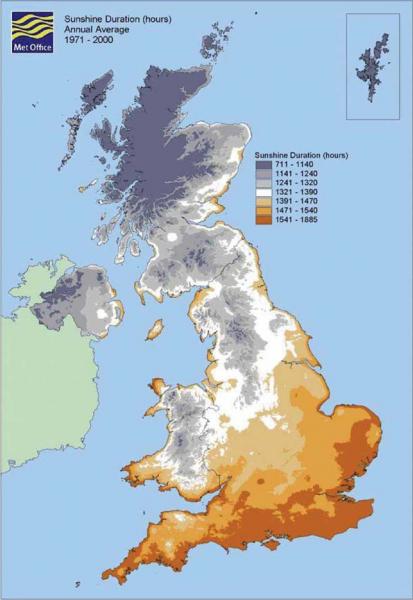 Mortality varies with latitude in the UK – Feb 2011         Printer Friendly PDF this page! Follow this page for updates
This page is in the following categories (# of items in each category)

Air conditioning has not totally canceled the latitude effective in the US ye...Increased incidence of 7 cancers if live far from equator (if not take vitami...Many diseases increase with latitude (low UV, Vitamin D)Vitamin D varies with latitude