Possible ways that vitamin D does its magic

Personally, I am rooting for DNA repair
- because it sounds so good, not because any better case has been made. Henry Lahore March 2012

Vitamin D and cancer: a review of molecular mechanisms. (Jan 2012)

The population-based association between low vitamin D status and increased cancer risk can be inconsistent, but it is now generally accepted. These relationships link low serum 25OHD (25-hydroxyvitamin D) levels to cancer, whereas cell-based studies show that the metabolite 1,25(OH)2D (1,25-dihydroxyvitamin D) is a biologically active metabolite that works through vitamin D receptor to regulate gene transcription.

In the present review we discuss the literature relevant to the molecular events that may account for the beneficial impact of vitamin D on cancer prevention or treatment.

These data show that although

These alternative mechanisms include

In addition, other cell targets, such as the

may be regulated by 1,25(OH)2D and contribute to vitamin D-mediated cancer prevention.

Cellular and molecular effects of vitamin D on carcinogenesis (Nov 2011)

Epidemiologic data suggest that the incidence and severity of many types of cancer inversely correlates with indices of vitamin D status. The vitamin D receptor (VDR) is highly expressed in epithelial cells at risk for carcinogenesis including those resident in skin, breast, prostate and colon, providing a direct molecular link by which vitamin D status impacts on carcinogenesis. Consistent with this concept, activation of VDR by its ligand 1,25-dihydroxyvitamin D (1,25D) triggers comprehensive genomic changes in epithelial cells that contribute to maintenance of the differentiated phenotype, resistance to cellular stresses and protection of the genome. Many epithelial cells also express the vitamin D metabolizing enzyme CYP27B1 which enables autocrine generation of 1,25D from the circulating vitamin D metabolite 25-hydroxyvitamin D (25D), critically linking overall vitamin D status with cellular anti-tumor actions. Furthermore, pre-clinical studies in animal models has demonstrated that dietary supplementation with vitamin D or chronic treatment with VDR agonists decreases tumor development in skin, colon, prostate and breast. Conversely, deletion of the VDR gene in mice alters the balance between proliferation and apoptosis, increases oxidative DNA damage, and enhances susceptibility to carcinogenesis in these tissues.

Because VDR expression is retained in many human tumors, vitamin D status may be an important modulator of cancer progression in persons living with cancer. Collectively, these observations have reinforced the need to further define the molecular actions of the VDR and the human requirement for vitamin D in relation to cancer development and progression.

The potential for vitamin D to reduce oxidative damage to DNA in a human has been suggested by clinical trial where vitamin D supplementation reduced 8-hydroxy-2'-deoxyguanosine, a marker of oxidative damage, in colorectal epithelial crypt cells.

The secondary function of Vitamin D in preventing DNA damage includes regulation of the poly-ADP-ribose polymerase activity in the DNA damage response pathway involved in the detection of DNA lesions.

It is also able to regulate the cell cycle to prevent the propagation of damaged DNA, and to regulate apoptosis to promote cell death. Vitamin D may contribute to prevention of human colorectal cancer, though there is little evidence to suggest that prevention of DNA damage mediates this effect, if real. Very limited human data mean that the intake of vitamin D required to minimise DNA damage remains uncertain. 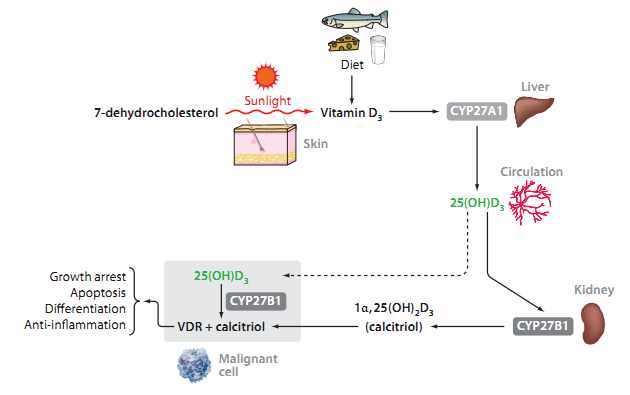 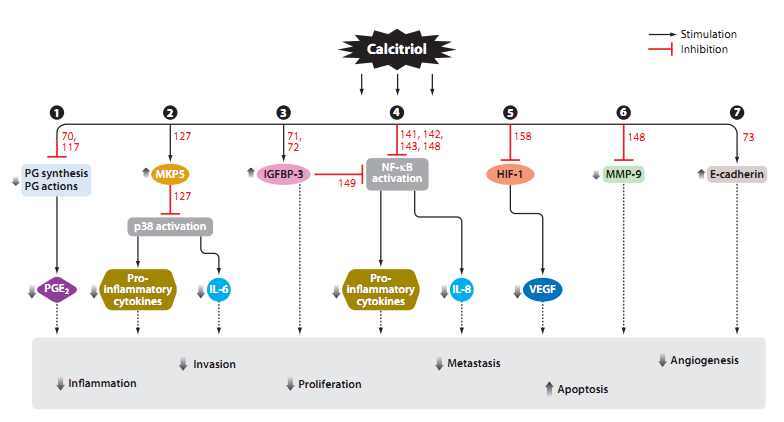 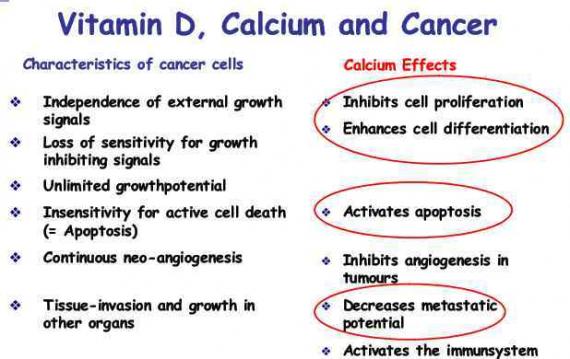 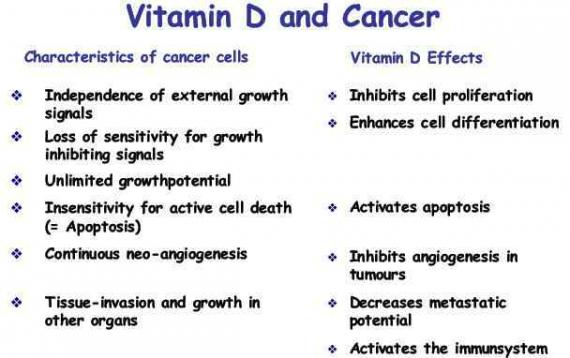 Possible ways that vitamin D does its magic         Printer Friendly PDF this page! Follow this page for updates
This page is in the following categories (# of items in each category)