Upon completion of this activity you will be able to:


The ASCP is accredited by the Accreditation Council for Continuing Medical Education to provide continuing medical education for physicians. The ASCP designates this journal-based CME activity for a maximum of 1 AMA PRA Category 1 Credit™ per article. Physicians should claim only the credit commensurate with the extent of their participation in the activity. This activity qualifies as an American Board of Pathology Maintenance of Certification Part II Self-Assessment Module.
The authors of this article and the planning committee members and staff have no relevant financial relationships with commercial interests to disclose.

Exam is located at www.ascp.org/ajcpcme.

The last decade has seen a substantial increase in clinical interest in vitamin D deficiency and of laboratory testing for vitamin D status.
Many clinical laboratories in the United States have seen requests for vitamin D testing increase 100% or more in the last 5 years.
The most common laboratory test to assess vitamin D nutritional status is total 25-hydroxyvitamin D serum concentrations.
Laboratory professionals are often confronted with challenges related to vitamin D testing, including controversy over optimal and target vitamin D concentrations, variable reference ranges across marketed assays and reference laboratories, lack of standardization of vitamin D assays, and misordering of 1,25-dihydroxyvitamin D testing.

This article presents a common clinical case scenario regarding vitamin D and an up-to-date discussion and review of the literature on vitamin D testing.

A 62-year-old woman was seen in an internal medicine clinic at an academic medical center. She is concerned about osteoporosis, especially because her older sister recently had a hip fracture at the age of 64 years. She is additionally concerned about vitamin D deficiency, having heard this topic discussed on a daytime television talk show. The patient had laboratory testing for vitamin D status 12 months earlier at a community hospital; the test was done by a commercial laboratory and showed a total 25-hydroxyvitamin D serum concentration determined by liquid chromatography/tandem mass spectrometry (LC/ MS/MS) of 26 ng/mL (65 nmol/L; >25 ng/mL 62 nmol/L defined as "optimal" in the reference range).

At the internal medicine clinic, the physician ordered laboratory tests using the hospital computer order system. To check vitamin D status, the physician selected a vitamin D panel that includes 25-hydroxyvitamin D and 1,25-dihydroxyvitamin D serum levels. The 25-hydroxyvitamin D serum concentration was determined at the medical center central clinical laboratory by enzyme immunoassay, and results were 29 ng/mL (72 nmol/L), which is in the "insufficiency" range according to the reference ranges on the package insert for the assay. The 1,25-dihydroxyvitamin serum concentration was determined by a reference laboratory by LC/MS/MS, and results were 55 pg/mL (143 pmol/L; reference range, 18-72 pg/mL 47187 pmol/L). The internal medicine physician is perplexed about the results of the laboratory testing and contacts the clinical chemistry director for consultation.

Vitamin D is an essential fat-soluble vitamin that affects nearly every organ system via interactions with the vitamin D receptor, a nuclear hormone receptor that acts as a transcriptional regulator of diverse physiologic processes.1 In the last 2 decades, there has been increasing interest in the biology of vitamin D and a growing recognition that vitamin D insufficiency is common throughout the world.2-4 One consequence of the growing clinical attention to vitamin D has been a substantial increase in laboratory testing for vitamin D. In the United States, many clinical laboratories have experienced increases in vitamin D testing of 100% or more in the last 5 years.5 This increase produces challenges for clinical laboratories, as will be discussed in this review.

Vitamin D was first recognized as a vitamin in the early 20th century as a factor in cod liver oil that prevented the development of rickets, a syndrome of bone weakening in children that can lead to fractures and permanent skeletal deformity.6 The "classic" actions of vitamin D are in the regulation of mineral metabolism, primarily by influencing renal reabsorption of calcium and phosphate and intestinal absorption of calcium.2 Vitamin D and parathyroid hormone (PTH) together serve as the most important physiologic regulators of calcium and phosphorus. Abnormal vitamin D serum or plasma concentrations trigger compensatory changes in PTH levels.7 For example, prolonged vitamin D deficiency can lead to a sustained increase in PTH secretion, a condition known as secondary hyperparathyroidism.

A number of factors contribute to vitamin D deficiency. The first is decreased endogenous production.11 UV-B rays in sunlight convert 7-dehydrocholesterol in the skin to previtamin D3, which then rapidly converts to vitamin D3. This process requires a UV-B index of greater than 3. In practical terms, optimal endogenous vitamin D3 production in response to sunlight in the northern latitudes requires sunlight exposure in the warmer months and during peak sunlight hours (approximately 10:00 am to 3:00 pm). In the Northern Hemisphere above 35° latitude (roughly that of Atlanta, GA, in the United States), essentially no vitamin D3 is produced endogenously from November to March, even with direct sunlight exposure. Consequently, for many people in the United States during the winter months, the only substantial source of vitamin D is from the diet. Even in climates in lower latitudes that have abundant sunlight, people who reside predominantly indoors during peak daylight hours produce very little vitamin D endogenously. Sunscreen use also dramatically decreases vitamin D production.11 Sunscreens with a sun protection factor of 15 or higher block 99% or more of vitamin D production. The ability to produce vitamin D also decreases as part of the aging process, mainly related to decreased availability of 7-dehydrocholesterol. Skin damage (eg, burns) can also reduce vitamin D production, depending on the extent of injury.12

To enhance vitamin D intake on a population-wide basis, dairy products (eg, milk, butter) may be supplemented with vitamin D2 or D3.13 Nearly all of the milk sold in the United States is voluntarily fortified with 100 IU vitamin D2 or D3 per cup. With the decreasing intake of milk by children, the list of foods supplemented with vitamin D has expanded to include orange juice, cereals, and some other foods. Canada and the United States mandate fortification of infant formula with vitamin D. It is important to keep in mind that dietary intake of vitamin D is often much less than could be achieved with 30 minutes of direct sunlight.11,15 For example, sunlight equivalent to 1 minimal erythemal dose (just enough to achieve redness of skin in 24 hours) in the summertime can result in 20,000 IU of vitamin D3 production. In contrast, 3.5 ounces of fresh wild salmon contains 600 to 1,000 IU of vitamin D3, while most fortified beverages and foods (eg, milk, orange juice) contain only 100 IU per serving. Breast milk also contains low concentrations of vitamin D, especially in lactating women who themselves are vitamin D-insufficient.2

The third main factor that can contribute to vitamin D deficiency is malabsorption.2 Conditions that can reduce vitamin D absorption include use of bile acid sequestrants (eg, cholestyramine, colesevelam), cystic fibrosis, celiac disease, Whipple disease, Crohn disease, and gastric bypass surgery. Patients with these conditions are also at risk for deficiency in other fat-soluble vitamins (A, E, and K). In patients with these conditions, increased vitamin D supplementation may be indicated. Alternatively, use of tanning beds at subtanning intensities can be highly effective in increasing vitamin D production in the skin.2

Last, a number of other factors can lead to vitamin D deficiency. A group of drugs (eg, carbamazepine, phenobarbital, phenytoin, rifampin, and St John's wort) increase liver expression of cytochrome P-450 enzymes that accelerate clearance of the active forms of vitamin D.16 Vitamin D supplementation is advised in patients receiving extended therapy with such medications, as may occur in conditions such as epilepsy and tuberculosis. Severe liver deficiency impairs 25-hydroxylation of vitamin D2 and D3. Not surprisingly, liver transplant recipients have a high prevalence of severe vitamin D deficiency.17 In nephrotic syndrome, vitamin D binding protein can be lost in the urine along with the bound vitamin D.2 There are also rare inborn errors of the vitamin D synthetic pathway or of the vitamin D binding protein that can cause vitamin D deficiency.18 In primary hyperparathyroidism, increased synthesis of 1,25-dihydroxyvitamin D leads to accelerated catabolism of 25-hydroxyvitamin D.19
Methods for Measuring 25-Hydroxyvitamin D

Other factors contributing to interassay variability include lack of standardization between methods, varying preanalytic purification schemes, the C-3 epimer issue, and interlaboratory differences in operating procedures.20 Standardization of 25-hydroxyvitamin D measurements has been aided by the development of standard reference material by the National Institute of Standards and Technology (United States)24 and ongoing efforts to standardize immunoassay and LC/MS/MS methods.20 One challenging issue is the discovery that certain patients, mainly infants (younger than 12 months), have high concentrations of a 25-hydroxyvitamin D3 isomer with epimeric variation at carbon-3 (C-3).25 The C-3 epimer can produce considerable problems with vitamin D measurements in infants, and currently only a limited number of reference laboratories have validated LC/MS/MS methods to deal with infant samples. Expert panels associated with the United Kingdom Food Standards Agency26 and the US National Health and Nutrition Examination Survey27 have recommended LC/MS/MS as the reference method for measuring 25-hydroxyvitamin D, with attention to be given to integrating the available standard reference materials and the ability to discriminate the C-3 epimer of 25-hydroxyvitamin D3. These national efforts will likely spur further improvements in 25-hydroxyvitamin D measurements.

An alternative approach to vitamin D reference ranges is to define clinical decision values for 25-hydroxyvitamin D serum and plasma concentrations such as the concentrations below which adverse health outcomes (especially osteoporotic-related bone fractures) increase significantly. This is the approach underlying the World Health Organization definition of vitamin D deficiency as a 25-hydroxyvitamin D serum or plasma concentration less than 20 ng/mL (50 nmol/L), which occurs in approximately 1 billion people worldwide.2 Some reference laboratories define optimal and deficient ranges for 25-hydroxyvitamin D concentrations, often with an insufficient or borderline deficient range in between. Some clinical decision values further delineate a "severe deficiency" range (often >10 ng/mL 10 nmol/L) that have a high risk of serious skeletal abnormalities and, thus, warrant immediate treatment (Table 1). 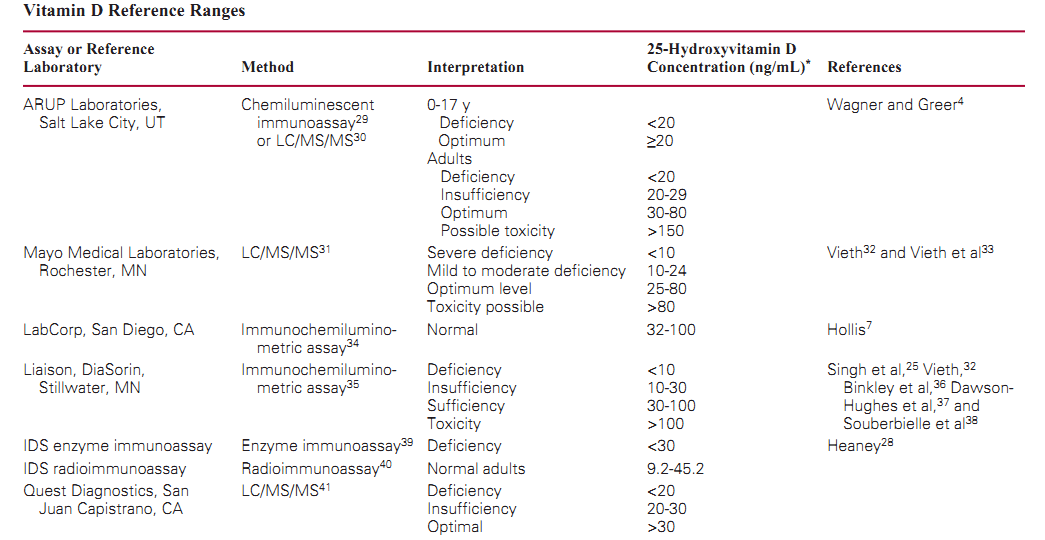 The growing clinical interest in vitamin D has led to dramatic increases in vitamin D testing. Consequently, laboratory professionals are confronted with the dual challenge of increasing testing volumes and helping clinicians navigate the complexities of vitamin D assays. iTable 2i summarizes some of the preanalytic, analytic, and postanalytic issues related to vitamin D testing. Clinical laboratory professionals can guide clinicians in appropriate indications for ordering 25-hydroxyvitamin D and also develop strategies to prevent inappropriate ordering of1,25-dihydroxyvitamin D. Education on 25-hydroxyvitamin D reference ranges can help place the results in a clinical context that can guide therapy and counseling of patients. Last, awareness of the limitations of the various 25-hydroxyvitamin D assays is especially important in comparing results across different assays, especially with the expected marketing of higher-throughput homogeneous immunoassays for 25-hydroxyvitamin D for automated instruments in the near future.

Calibration and standardization of assays

Consultation to medical professionals on Vitamin D Testing - Sept 2011         Printer Friendly PDF this page! Follow this page for updates
This page is in the following categories (# of items in each category)