Take vitamin D before/during largest meal of the day
Daily is best, but twice a month is OK
You could put all of the VItamin D to be taken for the month in a container
Near end of the month - take more than one daily so as to empty the container

Take Vitamin D with largest meal of the day

It appears that Vitamin D is absorbed at all locations in the small intestine
Where are Nutrients Absorbed? May 2008 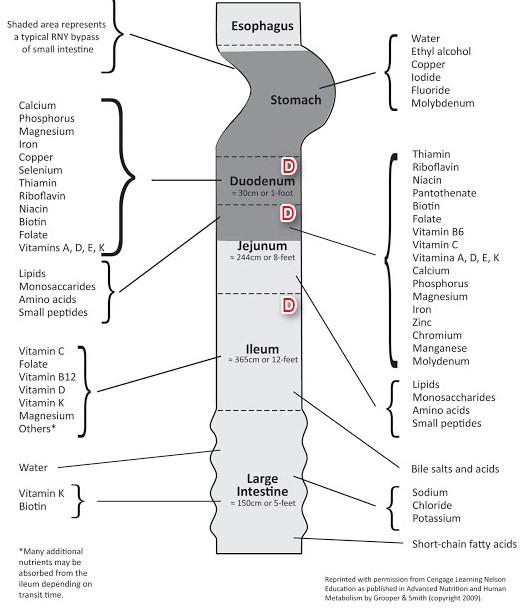 Apparently the stomach takes longer to release food after a big meal.
Wonder if there is a longer transit time in the small intestine after a big meal - and thus more time to get the vitamin D.
It would seem that this would be true of other supplements/drugs as well.

Perhaps not take vitamin D in the evening

When to take Vitamin D         Printer Friendly PDF this page! Follow this page for updates
This page is in the following categories (# of items in each category)
How, when to take Vit. D 49

How, when to take Vit. DPeople reported taking pills, pills were all gone, but occasionally bottles w...Poor absorption of Vitamin D is strongly related to type of gut bacteria – De...Reasons for low response to vitamin DVitamin D 30 percent more available at breakfast which had high fat content –...Vitamin D estimation nicely improved by neural networks – May 2015