Other mines had not found these high Vitamin D levels (3% <30 ng/ml. 11% > 80 ng/ml)
The study speculated various reasons
The only speculation which seems remotely possible is that miners gardened and did agricultural work when not mining
However, even farmers out all day long at the latitude to not get to >80ng/ml level
VitaminDWiki founder speculates:

1) Food was fortified with Vitamin D

2)The mine used lighting that emits UVB – such as mercury arc, fluorescent lamps
These lamps naturally generate UVB, but most manufacturers use glass that blocks UVB
A few groups which have added Vitamin D via UVB lighting have found great increases in health:

Mercury Arc Spectrum (if not filtered) 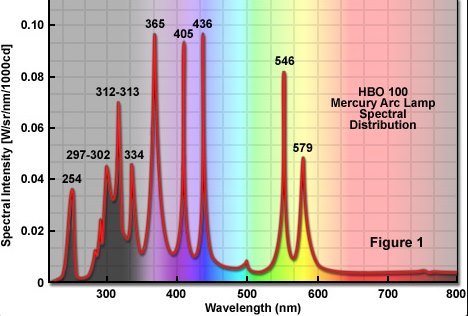 Clipped from the PDF: "Only four of the coal miners consumed supplements of VitD."

There were no statistical differences in 25 (OH)D levels in the coal miners with or without metabolic syndrome (or overweight/obesity).
Interestingly, 25(OH)D levels had significant positive correlations with body mass index (BMI), fat mass (FM), fat mass percentage (FM%), limbs FM%, serum triglycerides, GGT, AST, ALT, and ALT/AST ratio, and had significant negative correlations with serum HDL-cholesterol and age. All these correlations were lost after corrections for age, FM, FM%, and legs FM%.
In Serbian coal miners, high levels of early September VitD levels were observed, indicating sufficient non-working-hour sun exposure during the summer period. Furthermore, the unexpected positive correlations of VitD levels with anthropometric and biochemical parameters indicative of obesity, metabolic syndrome, and fatty liver disease were found. More research is needed on the VitD status of coal miners (particularly in the winter period) and its relationship with their cardiometabolic

One group of coal miners had surprising high Vitamin D levels in Sept (suspect low-cost UVB) – Sept 2021         Printer Friendly PDF this page! Follow this page for updates
This page is in the following categories (# of items in each category)
UV and Vitamin D 348 High Risk 57 Shut-in 36