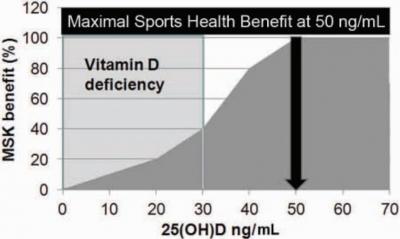 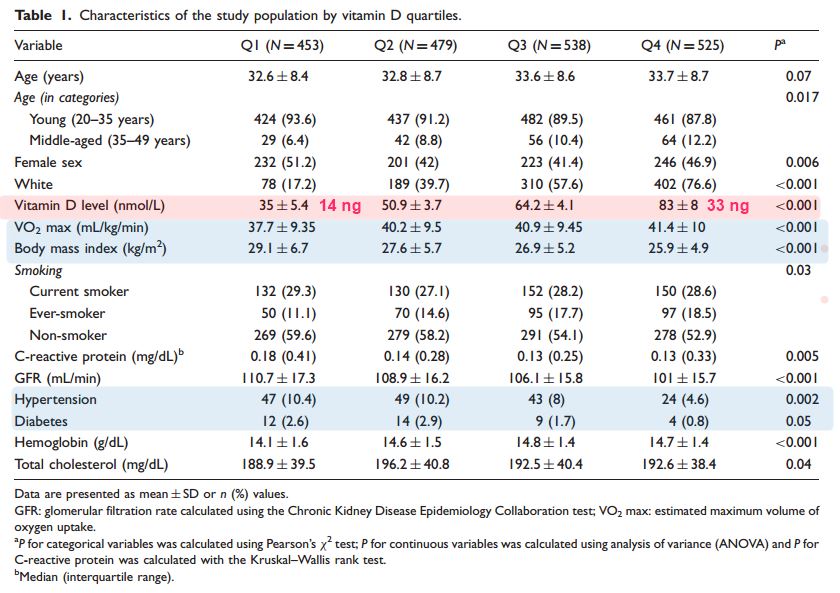 Note: Less hypertension and diabetes for those with higher levels of vitamin D 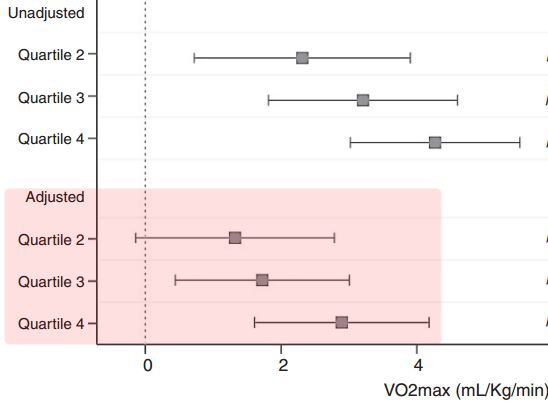 The small number of studies that have investigated the relationship between serum vitamin D levels and cardiorespiratory fitness (CRF) have reported conflicting results. We investigated the association between vitamin D levels and CRF in a representative sample of the US population using data from the National Health and Nutrition Survey (2001–2004).

Methods
We included participants between the ages of 20 and 49 years and excluded those with vitamin D levels at the 5% extremes of the distribution. We used survey-weighted linear regression without and with adjustment for age, sex, race, body mass index, hypertension, diabetes, smoking, C-reactive protein, hemoglobin, and glomerular filtration rate to examine the relationship between the maximal oxygen consumption (VO2 max) (as a surrogate for CRF) and vitamin D levels.

Conclusions:We found an independent and robust association between serum vitamin D levels and CRF, but our results need to be validated with clinical trials examining the effect of vitamin D supplementation on CRF.

Review found association, but no consensus by the Randomized Controlled trials - Nov 2018

BACKGROUND: Up to now, the association between vitamin D and cardiorespiratory fitness (CRF) is still inconsistent and there is a lack of a comprehensive review on this topic.

AIM: To systematically review the literature including both observational studies and randomized controlled trials (RCTs) on the association between vitamin D and CRF in the general population.

METHODS: The literature was investigated by exploring databases of PubMed, EMBASE, Scopus and ISI Web of Science as well as a manual search up to April 2017 by using related MeSH terms and key words. All the English-language articles that were conducted in the general population without any restriction on age range of participants and date of publication were included in the study.

RESULTS:
Among the 731 records which were found initially, a total of 20 articles including 18 cross-sectional studies and 2 RCTs fulfilled the inclusion criteria. Among the cross-sectional studies, findings on the association between serum 25(OH) D and CRF were incongruent. Additionally, studies which had reported significant results varied remarkably in terms of sample size, study population and the effect size of the association. In addition, RCTs found no significant improvement in CRF following vitamin D supplementation.

CONCLUSION:
Overall, evidence from cross-sectional studies does not support a strong association between vitamin D and CRF, although a number of studies demonstrated modest positive associations. Furthermore, limited RCTs did not confirm such an association. Further high quality research is needed to obtain a definite conclusion on this topic.

Printer Friendly PDF this page! Follow this page for updates
This page is in the following categories (# of items in each category)
Breathing 366 Sports and Vitamin D 228
Edit Comments Files 3