One of the many charts 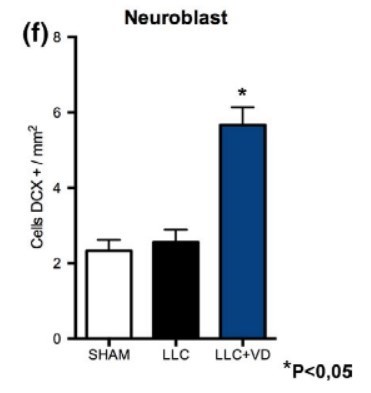 A few columns from a table of Vitamin D and remyelination 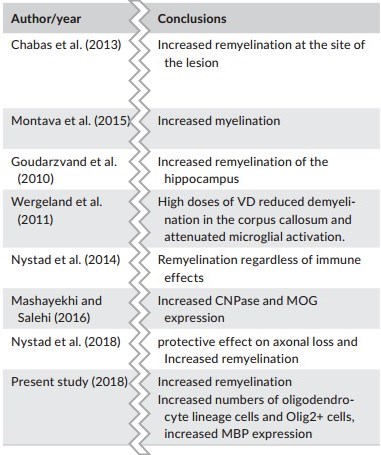 INTRODUCTION:
Several experimental studies have suggested the potential remyelinating effects of vitamin D (VitD) supplements regardless of the presence of VitD deficiency. This study aims to analyze neurogenesis in a model of toxic demyelination in order to evaluate the effects of VitD on demyelination and remyelination.

MATERIAL AND METHODS:
We used 24 male Wistar rats that had received surgical lesions to the corpus callosum and were injected with lysolecithin. Rats were divided into three groups:

We analyzed neurogenesis both in the subventricular zone and at the lesion site.

RESULTS:
Administration of VitD promotes the proliferation and differentiation of neural stem cells in the subventricular zone and the migration of these cells to the lesion site in the corpus callosum; these cells subsequently differentiate into oligodendrocyte lineage cells and produce myelin basic protein. This phenomenon was not caused by microglial activation, which was less marked in rats receiving VitD. Megalin expression did not increase at the lesion site, which suggests that VitD is internalized by other mechanisms.

CONCLUSION:
Our results support the hypothesis that regardless of the presence of VitD deficiency, treatment with VitD may contribute to remyelination by promoting the proliferation of oligodendrocyte precursor cells.