Background: Vitamin D was first described in the 20th century when a cause for the high prevalence of rickets was sought. With the fortification of certain foods with vitamin D, the prevalence of rickets decreased and little attention was placed on vitamin D. However, in the past decade there has been a revived interest in vitamin D, as it is thought to be associated with various nonskeletal disorders. Research has found that the prevalence of vitamin D deficiency worldwide is actually much higher than thought, and this has led to a massive increase in the demand for laboratory testing of vitamin D levels.

Vitamin D is a steroidal hormone produced by the skin or absorbed by the gastrointestinal tract (GIT). Most comes from exposure to sunlight, and 5 - 10 minutes of sun exposure 2 - 3 times a week may be adequate to produce sufficient quantities of vitamin D. It is found in the bloodstream bound to vitamin-binding protein. Two hydroxylation steps occur: the first at position 25 in the liver and the second in position 1 in the kidney under the influence of 1a-hydroxylase, leading to the formation of 1,25-dihydroxy-vitamin D or calcitriol, which is the active form of vitamin D. This last step is tightly regulated by factors such as parathyroid hormone, low phosphate levels and low dietary calcium intake. Fig. 1 shows the metabolism of vitamin D.

For decades we have known of vitamin D’s role in maintaining healthy bones. Vitamin D is known to facilitate the gastrointestinal absorption of calcium and phosphate. The main function of 1,25-dihydroxyvitamin D for bone mineralisation is to maintain the calcium-phosphate product in the circulation, which allows passive mineralisation of collagen bone matrix. Vitamin D deficiency is thus traditionally associated with deficiencies of bone mineralisation, namely rickets in children and osteomalacia in adults. Before the development of the latter two, the decreased ionised calcium levels due to inadequate gastrointestinal absorption induce an increase in parathyroid hormone levels. This leads to the differentiation of osteoclasts and the release of calcium and phosphate from bone. Parathyroid hormone also stimulates the production of 1,25 dihydroxyvitamin D in the kidneys. 1,25-dihydroxyvitamin D also increases the expression of bone alkaline phosphatase and other markers of metabolism. 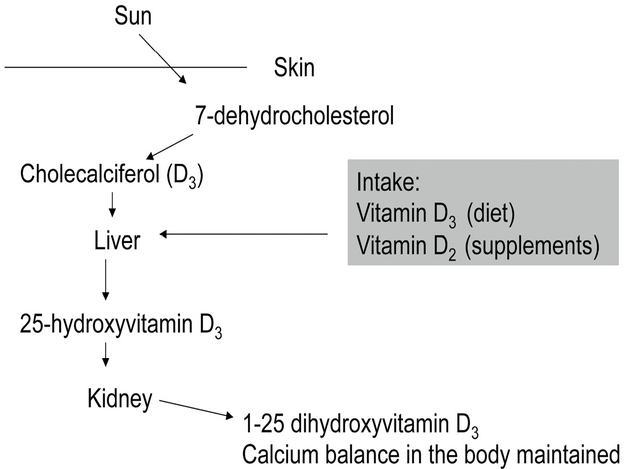 Fig. 1. The metabolism of vitamin D.

Early in the 20th century it was described that sunlight helped for auto-immune disorders such as lupus vulgaris and infectious disorders such as tuberculosis. Recently, vitamin D has been described to be anti-inflammatory and necessary for antimicrobial action against intracellular organisms.6 An association between low vitamin D levels, latitude and past sun exposure has also been found between vitamin D and multiple sclerosis,7 rheumatoid arthritis and osteoarthritis.

There is no consensus on optimal levels of 25-hydroxyvitamin D, although experts define deficiency as levels of <20 ng/ml (50 nmol/l).
Vitamin D intoxication is defined as 25-hydroxyvitamin D levels >150 ng/ml (374 nmol/l) and is only found in individuals taking in excess of 40 000 IU per day.
Using these levels, one billion people worldwide have vitamin D deficiency.13

Certain individuals are at increased risk of vitamin D deficiency:14

• people with pigmented skin
• those who lack exposure to sunlight
• people who wear skin-concealing garments or use sunscreen excessively
• children who are exclusively breast fed
• women who have multiple pregnancies with short intervals
• elderly, obese or institutionalised people
• vegetarians
• people who suffer from malabsorption, short bowel, liver or renal disease
• individuals who take certain pharmacological agents.

Only few foods are a good source of vitamin D, namely fortified dairy products and breakfast cereals, fatty fish, beef liver and egg yolks. Besides sun exposure, the best way to get additional vitamin D is through supplementation. Traditionally, multivitamins contained about 400 IU of vitamin D, but newer ones contain 800 - 1 000 IU. Two forms of vitamin D are available, namely D2 (ergocalciferol) and D3 (cholecalciferol). D3 is the preferred form, as it is more effective. As it is a fat-soluble vitamin, it should be taken with meals. Corticosteroids can reduce calcium absorption, which impairs vitamin D metabolism. Lipase inhibitors such as Orlistat and cholestyramine may reduce its absorption, and phenobarbitol and phenytoin may increase the hepatic metabolism of vitamin D to inactive compounds and thereby decrease calcium absorption. Newer work has shown that adults may need a vitamin D intake exceeding 2 000 IU per day.15

Vitamin D can be measured separately as vitamin D2 or D3 or as a total value. Vitamin D3 is mainly endogenously derived, and accounts for approximately 95% of vitamin D, whereas vitamin D2 is derived from food sources and is usually the minor fraction. However, with supplementation, vitamin D2 is given and assays that only measure vitamin D3 may underestimate the efficiency of treatment.16 Assays that mainly measure a specific fraction can thus mislead the physician. The most important value is the final total value, as this represents the total amount of 25-hydroxyvitamin D (D2 and D3) in the blood.

Previous assays were problematic, with >30% interlaboratory differences in results shown in 1995.12 This variation in results at that time led to Heaney stating in 2000 that ‘when ordering and interpreting serum 25-hydroxyvitamin D concentration, the physician needs, in virtually all cases, to ignore the laboratory’s published reference range…’.17 Improvements in assay standardisation and the introduction of new automated assays for vitamin D led to an improvement in interlaboratory difference to 15% in 2011.12

Laboratories face various problems when measuring 25-hydroxyvitamin D, which exists in various molecular forms and is bound to vitamin-binding protein.12 , 18 Reference ranges used by the laboratory depend on the reference population used, which in turn depends on season, altitude, latitude, age, skin colour and skin pigmentation, as all these factors may affect vitamin D levels.2 The value also depends on the assay used, as standardisation has not yet been achieved due to methodological variability. This means that values may not be comparable between laboratories and may confuse clinicians.

Recent literature has highlighted the nonskeletal effects of vitamin D, which has led to an increase in demand for vitamin D assessment from the laboratory. This has forced the development of more rapid automated assays for the determination of vitamin D levels and attempts at standardisation of the assay to enhance clinician satisfaction and reduce confusion. As researchers discover more associations between vitamin D levels and disease, the demand for vitamin D measurement in clinical practice is bound to increase even further. It is therefore important that the clinician understands the basic physiology that can influence laboratory assays as well as the pitfalls of the assays to aid with interpretation of results.

Vitamin D – Continuing Medical Education – 2013         Printer Friendly PDF this page! Follow this page for updates
This page is in the following categories (# of items in each category)
Overview for doctors 116