This small RCT gave 200,000 IU of vitamin D 1 hour AFTER intense (3MED) UV on one arm
For years we have suspected that Vitamin D both prevents and treats sunburns
This RCT confirms that ORAL Vitamin D can TREAT sunburn
The founder of VitaminDWiki believes that TOPICAL vitamin D is as good or perhaps better


The diverse immunomodulatory effects of vitamin D are increasingly being recognized. However, the ability of oral vitamin D to modulate acute inflammation in vivo has not been established in humans. In a double-blinded, placebo-controlled interventional trial, twenty healthy adults were randomized to receive either placebo or a high dose of vitamin D3 (cholecalciferol) one hour after experimental sunburn induced by an erythemogenic dose of ultraviolet radiation.
Compared to placebo, participants receiving vitamin D3 (200,000 IU) demonstrated reduced expression of pro-inflammatory mediators TNF-α (p=0.04) and iNOS (p=0.02) in skin biopsy specimens 48 hours after experimental sunburn. A blinded, unsupervised hierarchical clustering of participants based on global gene expression profiles revealed that participants with significantly higher serum vitamin D3 levels after treatment (p=0.007) demonstrated increased skin expression of the anti-inflammatory mediator arginase-1 (p=0.005), and a sustained reduction in skin redness (p=0.02), correlating with significant expression of genes related to skin barrier repair.
In contrast, participants with lower serum vitamin D3 levels had significant expression of pro-inflammatory genes. Together the data may have broad implications for the immunotherapeutic properties of vitamin D in skin homeostasis, and implicate arginase-1 up regulation as a previously unreported mechanism by which vitamin D exerts anti-inflammatory effects in humans. 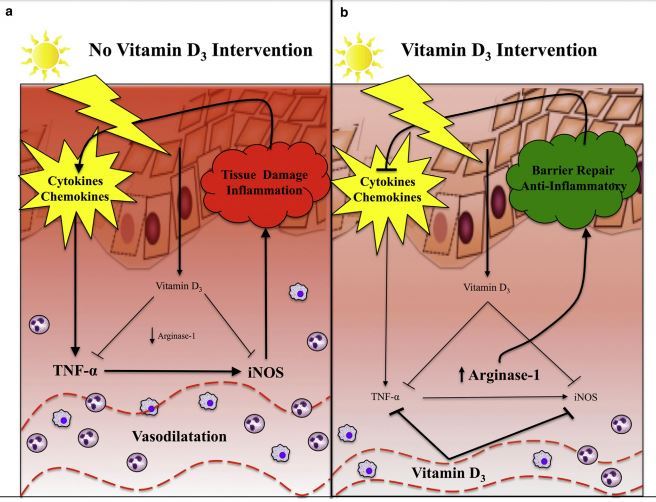 The effect of oral vitamin D3 intervention on skin inﬂammation. (a) Levels of vitamin D3 are at baseline levels in the absence of high-dose oral vitamin D3 intervention. In this context, exposure to erythemogenic doses of UVR results in sunburn and the release of proinﬂammatory cytokines and chemokines in the skin, including TNF-a and iNOS, which further propagate tissue inﬂammation. Increased skin redness and thickness are mediated by vasodilation, an inﬂux of inﬂammatory cells, and vascular congestion within the skin. The gene expression proﬁle of skin at this time is characterizedby increased expression of various proinﬂammatory genes. (b) Levels of vitamin D3 rapidly rise within the serum after high-dose oral vitamin D3 intervention.
Arginase-1 is upregulated within the skin, and production of the proinﬂammatory mediators TNF-a and iNOS is attenuated after sunburn. Reduced skin erythema and thickness are observed clinically. The gene expression proﬁle of skin at this time is characterized by increased expression of skin barrier genes, which help to repair the epidermal barrier and attenuate the inﬂammatory insult. iNOS, inducible nitric oxide synthase; TNF-a, tumor necrosis factor-a.

High doses of oral vitamin D3 attenuate skin inflammation following experimentally induced sun damage.
Summer is upon us; so what to do if you forget to reapply your sunscreen? To avoid a nasty sunburn, Scott et al. suggest we could reach for vitamin D rather than aloe vera. Produced in the skin following ultraviolet (UV) light exposure and then hydoxylated to its active form in the liver and kidney, vitamin D has long been recognized as critical for calcium homeostasis and bone health. Although recently touted to reduce cancer risk, cardiovascular disease, and susceptibility to infections and autoimmunity, there is as yet insufficient evidence to recommend dietary supplementation for any of these extra-skeletal indications.

These intriguing results suggest that a single high-dose of oral vitamin D mitigates inflammatory sequelae of UV-induced skin injury. Although the authors note that arginase-1, which has the capacity to reduce iNOS, was up-regulated in skin macrophages of “vitamin D responders,” the mechanisms for vitamin D-associated protection from skin inflammation remain unknown. Assuming these findings are replicated in a larger study, we also need to understand whether high-dose vitamin D could increase mutation rates by uncoupling UV injury from immune-mediated tissue repair and removal of damaged keratinocytes. For now, this dermatologist will keep her sunscreen close by.

9 studies referenced this paper as of Aug 2018

Vitamin D Prevents Sunburn: Tips for the Summer?
Journal of Investigative Dermatology; Volume 137, Issue 10, October 2017, Pages 2045–2047
Clinical Implications
• The inflammatory response of the skin to UV radiation was ameliorated by administration of high doses of vitamin D.
• Subjects who responded best to the protective actions of vitamin D showed increased expression of arginase-1.
• Arginase-1 is highly expressed in myeloid derived suppressor cells, so its increased expression by vitamin D may contribute to the protective actions of vitamin D.
&nbspDownload the comment PDF from VitaminDWiki

Page was renamed Aug 2018 - adding RCT. Visitor count had been 889 before the rename

25 percent of most dermatologic prescriptions are not filled, however all vit...Burn patients have little vitamin D and benefit when it is restoredEmbrace the Sun – benefits of the sun throughout the day and year – book June...Making vitamin D from sunshine – 2 minute cartoon video by Vitamin D Society ...Natural ways to prevent a sunburn – 2011, 2016Overview Suntans melanoma and vitamin DPerhaps not burn from the sun if have enough vitamin DRedhead – Red hair - vitamin DThe Greatest Public Health Mistake of the 20th Century (sunscreen block Vitam...Vitamin D protects DNA against UV skin damage – 5 studies 2012-2013Widespread regular sunscreen application deemed not useful in the US – April ...