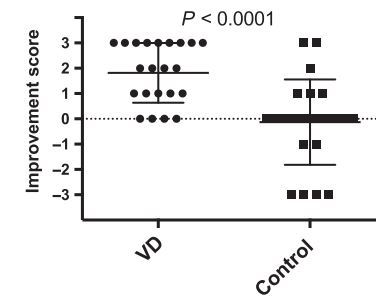 Rhododendrol (RD), 4-(4-hydroxyphenyl)-2-butanol, inhibits melanin synthesis and has been used for skin-whitening cosmetic products. RD has been very effective in lightening skin pigmentation, but some persons have developed so-called RD vitiligo, in which vitiligo starts on the face, neck and hands where topical RD has been applied and even extended over skin areas where RD has not been applied. RD vitiligo lesions in some patients have lasted for years and have been resistant to conventional vitiligo treatments. We examined the effects of cholecalciferol on RD vitiligo in a blinded randomized clinical trial. Forty-eight female RD vitiligo patients were recruited for the trial and were randomized into two groups: the vitamin D (VD)-intervention group that received daily 5000 IU cholecalciferol for 5 months and the control group. Three blinded investigators scored vitiligo improvement by comparing photographic images of baseline and at 5-month observation. Serum 25(OH)D3 of RD vitiligo patients was not significantly different from age-matched healthy volunteers. Twenty-two in the VD-intervention group and 23 in the control group completed the 5-month observation. Serum 25(OH)D3 levels were significantly increased after the 5-month VD intervention, while the control group did not change. The improvement scores were significantly higher in the VD-intervention group than the control group. The improvement scores were positively correlated with the serum 25(OH)D3 levels after the 5-month intervention period but not before the treatment. This blinded randomized clinical trial showed favor in administrating 5000 IU cholecalciferol daily to RD vitiligo patients.

Skin whitening cream (RD) may cause blotchy skin, 5,000 Vitamin D can treat it – RCT Feb 2018         Printer Friendly PDF this page! Follow this page for updates
This page is in the following categories (# of items in each category)
Skin 100