White matter hyperintensities in Parkinson's disease: do they explain the disparity between the postural instability gait difficulty and tremor dominant subtypes? Jan 2013

BACKGROUND:
Brain white matter hyperintensities (WMHs) commonly observed on brain imaging of older adults are associated with balance and gait impairment and have also been linked to cognitive deficits. Parkinson's disease (PD) is traditionally sub-classified into the postural instability gait difficulty (PIGD) sub-type, and the tremor dominant (TD) sub-type. Considering the known association between WMHs and axial symptoms like gait disturbances and postural instability, one can hypothesize that WMHs might contribute to the disparate clinical sub-types of patients with PD.

RESULTS:
Overall, MRI data were obtained in 104 patients. The mean WMHs scores and the percent of subjects with lesions in specific brain regions were similar in the two subtypes, p = 0.678. The PIGD and the TD scores did not differ even when comparing patients with a relatively high burden of WMHs to patients with a relatively low burden. Across most of the brain regions, mild to moderate correlations between WMHs and age were found (r = 0.23 to 0.41; p<0.021). Conversely, no significant correlations were found between WMHs and the PIGD score or disease duration. In addition, depressive symptoms and cerebro-vascular risk factors were similar among the two subtypes.

CONCLUSIONS:
In contrast to what has been reported previously among older adults, the present study could not demonstrate any association between WMHs and the PIGD or TD motor sub-types in patients with PD.

RESULTS:
91 patients; mean age 64.9 years, mean education of 10.5 years. 24 patients fulfilled the Movement Disorder Society criteria for MCI and were classified as PD-MCI while the rest were classified as PD with no cognitive impairment (PD-NCI). Patients with PD-MCI and PD-NCI did not differ in Hoehn & Yahr staging. PD-MCI patients had a higher prevalence of diabetes mellitus, hypertension and hyperlipidemia. PD-MCI patients had significantly greater volume of periventricular (6.04 ml vs. 2.66 ml, p = 0.001) and deep subcortical WMH (2.16 vs.1.44, p = 0.002). Regional WMH was significantly greater among PD-MCI in the frontal, parietal and occipital regions. Logistic regression analyses demonstrated WMH to be associated with PD-MCI independent of age, education, and vascular risk factors. Increasing WMH volume was associated with lower performance on executive function, memory and language.

CONCLUSIONS:
WMH is an important risk factor for PD-MCI independent of vascular risk factors. PD patients with WMH should be regularly screened for MCI. 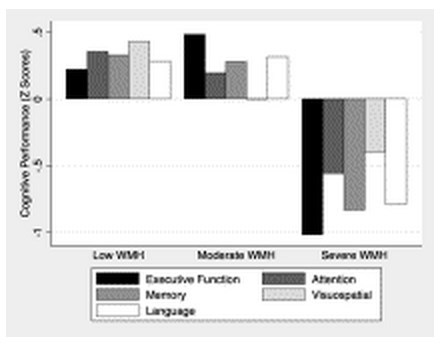 BACKGROUND: Cerebral WMH detected on magnetic resonance imaging (MRI) brain scans are associated with cognitive impairment in the elderly and in Alzheimer's disease. Less is known, however, about the contributions of WMH to PD mild cognitive impairment (PD-MCI) and PD dementia (PDD).

CONCLUSIONS: Increased WMH burden in PD is associated with worse cognitive status, regardless of age or vascular risk factors. Periventricular and deep WMH, especially in the parietal lobe, differentiate the cognitive groups, and thus, may serve as markers of cognitive decline in PD.

Parkinsons' disease and MRI white matter in brain         Printer Friendly PDF this page! Follow this page for updates
This page is in the following categories (# of items in each category)
Parkinson 86 Top news 849