Overlap between Fibromyalgia and other Chronic Pains – 2012

The Prevalence of Fibromyalgia in Other Chronic Pain Conditions 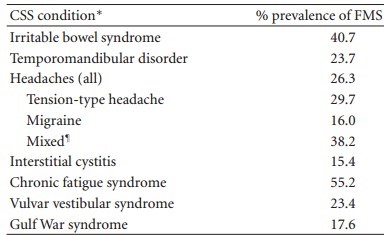 Disease and prevalence of FMS 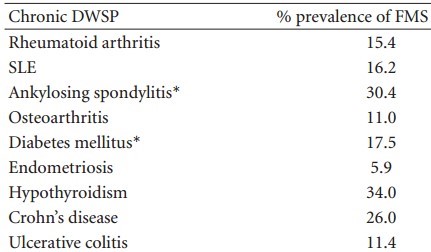 Central sensitivity syndromes (CSS) include fibromyalgia syndrome (FMS), irritable bowel syndrome, temporomandibular disorder, restless legs syndrome, chronic fatigue syndrome, and other similar chronic painful conditions that are based on central sensitization (CS). CSS are mutually associated. In this paper, prevalence of FMS among other members of CSS has been described. An important recent recognition is an increased prevalence of FMS in other chronic pain conditions with structural pathology, for example, rheumatoid arthritis, systemic lupus, ankylosing spondylitis, osteoarthritis, diabetes mellitus, and inflammatory bowel disease. Diagnosis and proper management of FMS among these diseases are of crucial importance so that unwarranted use of such medications as corticosteroids can be avoided, since FMS often occurs when RA or SLE is relatively mild.

Introduction: Historical Overview and the Importance of Nomenclatures

The fact that fibromyalgia syndrome (FMS) is associated with several similar conditions without structural pathology was first reported in a controlled study in 1981 [1], following which a conceptual model was proposed with a Venn diagram, showing the mutual overlaps in these syndromes [2]. Since then, a large number of studies have confirmed these associations, compared with both healthy controls as well as diseases with structural (the so-called “organic”) pathology (DWSP) [3, 4]. (Although there are structural changes, e.g., decreased hippocampus and gray matter volume in some CSS conditions, these changes seem to result from prolonged central sensitization (CS) and will be discussed at the end.) These overlapping conditions are collectively known as central sensitivity syndromes (CSS) [5-8], since CS is the common binding glue between them. The term CSS was first coined in 2000 [5] and has been reviewed [5-8]. We [6] and others [9] have described mutual associations among the CSS conditions.
In contrast to association of FMS with other CSS members, association of FMS with DWSP was reported somewhat later [10] and more frequently only in recent years. Wolfe and Cathey were the first to recognize the association of FMS with rheumatoid arthritis (RA) [10]. Although they were called “secondary fibrositis,” these were cases of concomitant FMS with typical symptoms and multiple tender points (TP) in association with RA. The diagnosis of FMS in the pre-1990 ACR criteria era was made on the characteristic symptoms of FMS as well as many tender points [10].

What’s in a name? Asked Shakespeare rhetorically in Romeo and Juliet. My own answer is “A lot.” A name should be meaningful, tell the gist of the topic, and must not distort the underlying truth, recognizing that scientific truth is not carved in rock and does change over time. In this discourse, I shall use the terms syndrome, illness, condition, and disease synonymously. Further, since the term fibromyalgia implies nothing more than pain as has been discussed by Fitzcharles and Yunus in this issue of the journal, I prefer the term “fibromyalgia syndrome” since FMS is so much more than pain with a large number of other distressing symptoms.

Elsewhere, I have argued that differentiation between illness and disease is artificial and contrary to patient interest and hampers proper management ofCSS conditions, since anything that is not currently viewed as a disease (i.e., does not have structural pathology, e.g., inflammation, degeneration, or neoplasm) is viewed as predominantly or exclusively psychological and benign and is not taken seriously by the health care providers, accentuating the suffering of the patients [7]. In an irresponsible way, this untruthful “dogma” is passed down from the professor or the attending to the students, and the victims are our patients.

I have also rationalized that the use of the term “organic” for DWSP is irrational, since organs are involved in both CSS and DWSP—functional changes in the former and structural in the latter [7]. In the same context, the use of the nosology “functional” for CSS is antithetical, since the neurochemical- endocrine status of organs involved in CSS is dysfunctional!

Such nomenclatures as “medically unexplained symptoms” or MUS and “somatization disorder” (SD) are equally fallacious and detrimental to scientific progress, and statements of bias. Such a bias impedes empathetic and proper patient care. By DSM IV-TR definition, in SD “laboratory tests are remarkable for the absence of findings to support subjective symptoms.” This is obviously not true of CSS diseases as has been adequately discussed [7]. CSS are medical conditions based on objective pathology of neurochemistry and neuroimaging that explain many symptoms of CSS diseases [7]. So, terms like MUS seem to sprout in a fertile mind of bias. The problem is that MUS represents illness and illness is a second class citizen in the land of medicine.

Materials and Methods: Process of Locating Articles for This Review and the Author’s Own Views

Several sources of literature search were employed: PubMed, Science Citation Index—ISI Web of Knowledge and CINAHL Plus. A large number of key words were used, including

Additionally, all references of a given article were searched for an additional source. Finally, this paper adds my own ideas.

CSS conditions include FMS, irritable bowel syndrome (IBS), functional dyspepsia, chronic fatigue syndrome (CFS), myogenic temporomandibular disorder (TMD), tension- type headache, migraine, regional pain syndromes (myofascial pain syndrome and neck and back pain without structural pathology), restless legs syndrome, interstitial cystitis, multiple chemical sensitivity, posttraumatic stress disorder (PTSD), Gulf War syndrome, and vulvodynia [69]. Undoubtedly, the number will grow by the Yunus criteria for CSS [6]. Although the literature is ripe with reports of increased prevalence of various members of CSS in FMS (too many to provide references), reports on their bidirectional interrelationships are relatively few [6, 9]. Thus, while prevalence of irritable bowel syndrome (IBS) in FMS is increased compared with controls [1, 3-9], same is also true for FMS in a population ofIBS and other CSS members, such as (TMD) (see below).
Studies ofthe occurrence ofFMS in other CSS conditions are generally limited at this time (compared with prevalence of CSS in FMS). Number of studies is indicated by the number of references (Table 1). Increased prevalence of FMS, either by the use of a healthy control group or by consideration of the prevalence of FMS in the general population, has been reported in IBS [9, 11-14], TMD [9, 15-19], headaches [9, 20-23] (including tension-type headache, migraine, and a mixed group of TTH and migraine), interstitial cystitis [9, 24-27], chronic fatigue syndrome [9, 28, 29], vulvodynia/vulvar vestiular syndrome [30, 31], and GulfWar syndrome [32-34].

Sixty-seven percent of patients who present with “idiopathic” chronic low back pain were found to have FMS [9]. Patients presenting with chronic low back or neck pain demonstrate evidence of CS [6, 8, 9], and these patients often develop widespread pain and fibromyalgia at a later time [6,35].

Most cases of FMS begin with regional pain similar to MPS. Trigger points (TrP), in addition to tender points (TP), are also present in FMS [37]. It has been suggested that a continuous input from a TrP leads to, and maintain, CS both in MPS and FMS [37]. The cause of TrP is speculative but include local trauma (including fall, motor vehicle accident, overuse, and repetitive use), spinal stress (e.g., scoliosis or poor posture), and perhaps systemic factors, for example, mental stress. TrP are likely sustained by CS [36].

FMS in Chronic Painful Diseases with Structural Pathology: An Expansion of the Fibromyalgia Territory

As early as 1983, Wolfe and Cathey recognized the concomitant occurrence of FMS among RA patients. It was an astute observation since many features of FMS, for example, pain at multiple sites (including bursal and tendon areas), fatigue, a feeling of malaise and tenderness at multiple spots, including joint areas, may also be present in RA itself. What was not definitely known at that time is whether RA patients were also tender in muscles and other sites of typical tender points. As it turned out, multiple TPs are a unique feature of FMS,
although they are present to a lesser extent in other members of CSS as a manifestation of CS [6].

CS alone (without FM) has been reported in juvenile chronic arthritis [59], OA [60-65], endometriosis [66], carpal tunnel syndrome [67-69], chronic pancreatitis [70, 71], and Parkinson’s disease [72-74]. It is likely that CS is the harbinger of future development of FMS, as may be demonstrated in future studies. It is as if “fibro, fibro everywhere and not a place for the (rational) eyes to hide" An interesting question is, and data have not emerged yet to answer it, are other members of the CSS family, such as IBS and myogenic TMD also associated with these chronic diseases with structural pathology?

FMS has been reported also in Sjogren’s syndrome, hepatitis C, HIV, and other infections, for example, Lyme disease. True to the title of this essay, however, only those diseases that usually cause pain have been described in this paper.

Critical Evaluation of the Studies:

Imperfect but the Associations Are Real
A number of studies, both in the category of FMS in CSS and FMS in DWSP, are less than satisfactory because of small numbers, unspecified or nonstandard criteria used (both for FMS and the associated diseases), an absence of, or the use of inappropriate controls as well as inappropriate statistics, for example, a failure to adjust for multiple comparisons. Lack of blindness, a critical procedure to avoid bias, was universal, as is the case with most published studies in any disease.

However, reported prevalence rates of FMS in general were much higher than that in the general population. Since the results of all the studies converge in the same direction, that is, increased prevalence of FMS compared with study or population controls, it seems proper to conclude that true associations of FMS with the diseases discussed exist.

Pathophysiological Mechanisms of Disease Associations with FMS: Central Sensitization Is Central
6.1. CS and CSS Conditions. Central and common to CSS diseases are CS. The pathophysiology of CS has been discussed elsewhere [6, 8, 75] and is beyond the scope ofthis essay. To be sure, the mechanisms involved in CS are multiple and complex [75]. Some of these mechanisms involve temporal summation (windup), long-term potentiation (LTP), heterosynaptic potentiation, a dysfunctional descending pain inhibition, and an activation of the descending facilitatory pathway [75]. It is also evident that input in one set of nociceptive fibers amplifies subsequent response to other nonstimulated noceptive or nonnociceptive fibers (heterosynaptic potentiation). Such phenomena explain diffuse distribution of pain as well as allodynia.

After many years of research in animal models, human volunteers, and chronic pain conditions, several facts have emerged. While a noxious stimulus at some point in the past might have initiated increased neuronal sensitivity, no further nociceptive stimulus is necessary to perpetuate and sustain a state of hyperalgesia or allodynia. That sustained pain is no longer nociceptive in nature, provoking some physicians to take recourse to such derogatory lexicons as neurotics, malingerers, somatizers, and “medically unexplained symptoms" (read “your symptoms are all in your head"). In other cases, following the adequate initial nociceptive input, only a very low level of nociceptive stimulus was needed to maintain the CS [75].

With regards to tender points, it is often stated that they are subjective (thus there is an issue of secondary gain here), but CS maybe elicited by stimuli that do not require patient’s subjective response and are thus purely objective. Such an objective “test" is nociceptive spinal flexion reflex that has been demonstrated in several CSS conditions [6]. Using ascending and random paradigms, it has been demonstrated

remainder is in   PDF on VitaminDWiki.